Menu
Whether to increase flexibility or prevent injury or for the positive impact on mental health, men are becoming ever more convinced of the benefits of yoga practice. While high-profile yogis like the impossibly bendy Russell Brand might scare some off, elite athletes such as Tom Brady, LeBron James and Ryan Giggs have helped move the practice toward the male mainstream.  Frenchman Allaoua Gaham has lived in Dubai for 12 years and in 2016 quit his... 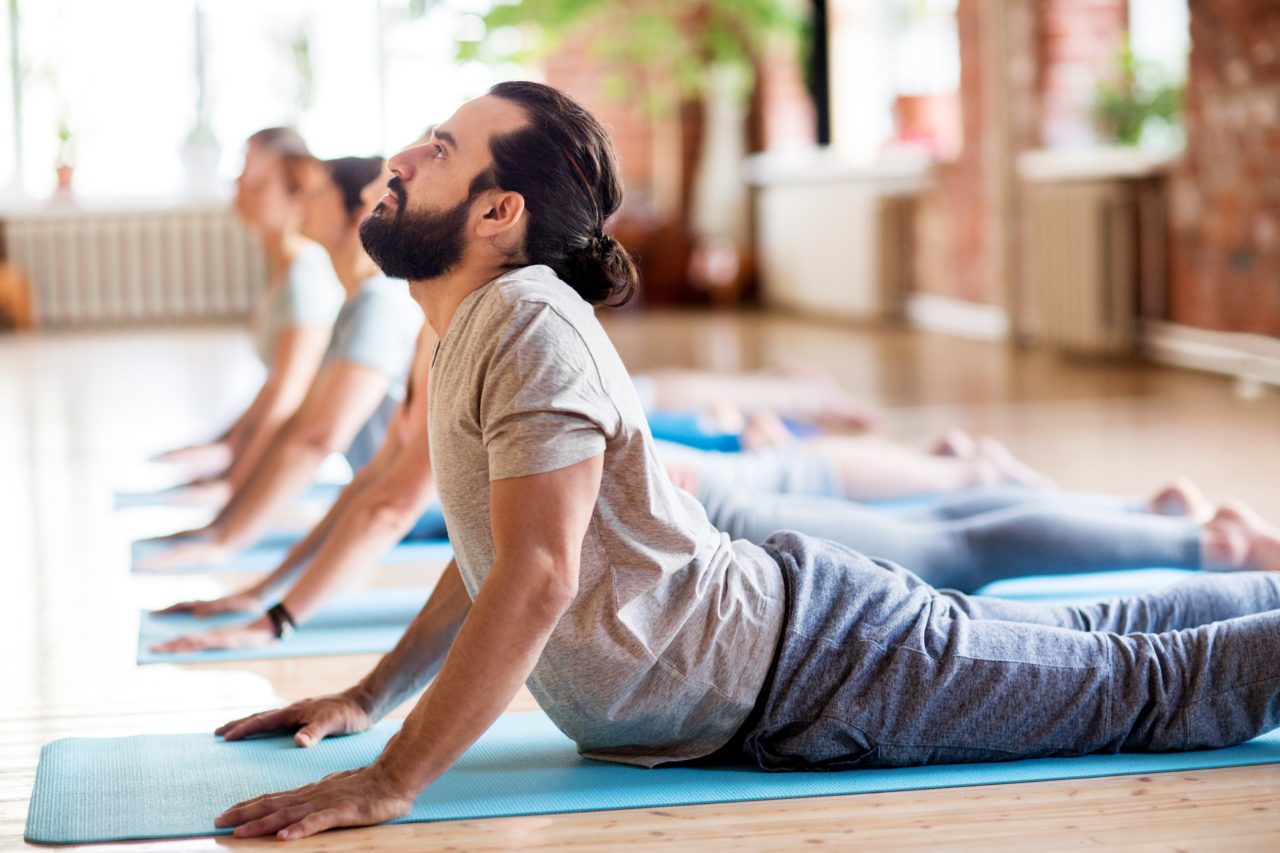 Whether to increase flexibility or prevent injury or for the positive impact on mental health, men are becoming ever more convinced of the benefits of yoga practice. While high-profile yogis like the impossibly bendy Russell Brand might scare some off, elite athletes such as Tom Brady, LeBron James and Ryan Giggs have helped move the practice toward the male mainstream.

Frenchman Allaoua Gaham has lived in Dubai for 12 years and in 2016 quit his corporate job to become a full-time yoga instructor. Gaham has been working to change male perceptions of yoga but insists that he is still battling against outdated stereotypes.

“I’ve had all sorts of strange conversations with men about yoga,” he says. “People have genuinely told me with a straight face that they ‘would like to try yoga but wouldn’t feel comfortable wearing leggings.’ I wish I was joking. There is still this association with yoga as a feminine workout and that it is ‘just stretching’. It is frustrating to hear.

“However as soon as men step into it they understand two things. Firstly, they are not as strong as they thought they were. And secondly, there is absolutely no shame in doing yoga.

“My favourite method of introducing men to yoga is by challenging them. I say, ‘It’s not as easy as you think, you probably couldn’t even finish a class.’ This is a trigger that some of them need but it is also true. I’ve seen HIIT and Crossfit instructors come into yoga classes and struggle.”

Gaham has an increasingly diverse client base that has included male polo players, rugby players and two of the top 20 on the Forbes India’s 100 Richest People list.

The Frenchman takes his position seriously and feels a responsibility to promote the benefits of yoga to men and help them feel comfortable enough to attend classes or private sessions.

“I think women are more willing to talk about problems and address issues around stress while for many men this still feels kind of taboo. Men often seem more willing to just carry around their stress but even just one yoga class a week can help alleviate that pressure a little.

“When men come and try yoga, they see it is beneficial on a personal level, a physical level and a mental level – helping you better connect with your emotions. And then they tend to come back.”

Canadian Osman Zin AlAbdin has been practicing in the UAE for several years and has also noticed a growth in the number of men attending classes.

“I can’t tell you how many times I have heard men teased for doing yoga because their friends think it is just ‘stretching with the ladies’. There is so much ignorance out there but thankfully men are becoming more educated,” he says.

“Word-of-mouth is a really powerful tool and when you see a guy doing a handstand or headstand at the gym and he says he can do it because he practices yoga, then that’s a great advert. There are some strong pro-yoga voices on social media too. Yoga is definitely entering the health and fitness mainstream.”

AlAbdin sometimes travels to Saudi Arabia for classes and he has noticed that even in the Kingdom, interest in yoga has been piqued among men.

“I’m always happy to see guys in my class and you can see they are more relaxed when they see another guy. Whether I’m teaching or attending, they are happy when there is another man. They feel relieved.”

Men looking to try yoga don’t have to throw themselves in to daily classes in order to feel the benefit; instead they can blend their traditional exercise with a few yoga sessions, AlAbdin advises.

“I started with one class a week and I think this is a good way to get a taste, though now I practice every single day. It is good to do some form of traditional cardio alongside yoga, though you will see when you start that you will probably sweat doing yoga. This lets you know that something is happening and after a while, you start to feel more in tune with your body and mind.”

Dubai-based Egyptian Kamal Edrees started to practice yoga in 2013 when he was working in a stressful job in pharmaceutical sales. However for the next two years he focused, as many men do, on the muscular, physical part of yoga.

“How to be stronger, how to achieve the challenging poses, like hand stands, arm balances and so on,” he explains. “My way of thinking was to see it as a challenge, which is the way most men think about it.”

His responsibilities and stress grew as he did this, and he injured himself “because my mind was not connected to my body.”

And then he discovered the “magical bridge” that helped to change all that, and bring his mind and body into balance: the breath, which is one of the fundamentals of the eight limbs of yoga.

“Once I started being aware of my breath, it started calming me down,” he explains.

Saad, now a full-time yoga teacher, often reminds students how important breath is in controlling the nervous system and keeping energy levels. Men don’t even need to enter a yoga class to access this tool. While there are a lot of different breathing techniques out there, Saad advises an equal inhale and exhale: for five to six seconds each, for up to five minutes at a time.

“That’s enough to  reduce any kind of stress that increases,” he says. “The only way to calm down the nervous system is to make friends with your breath.”

What it feels like to do a 72-hour water fast

It's high time for a digital detox: here's how