Menu
If you are one of the 30,000 runners expected to line up for the start of the Standard Chartered Dubai Marathon at 7am on Friday, January 24,and are perhaps now wondering whether all that training and the anticipated agony of the 42.195-kilometer slog that lies ahead of you is really going to be worth it, relax. Right now, the decision to enter Dubai’s 20th anniversary marathon – perhaps taken in the heat of the moment after... 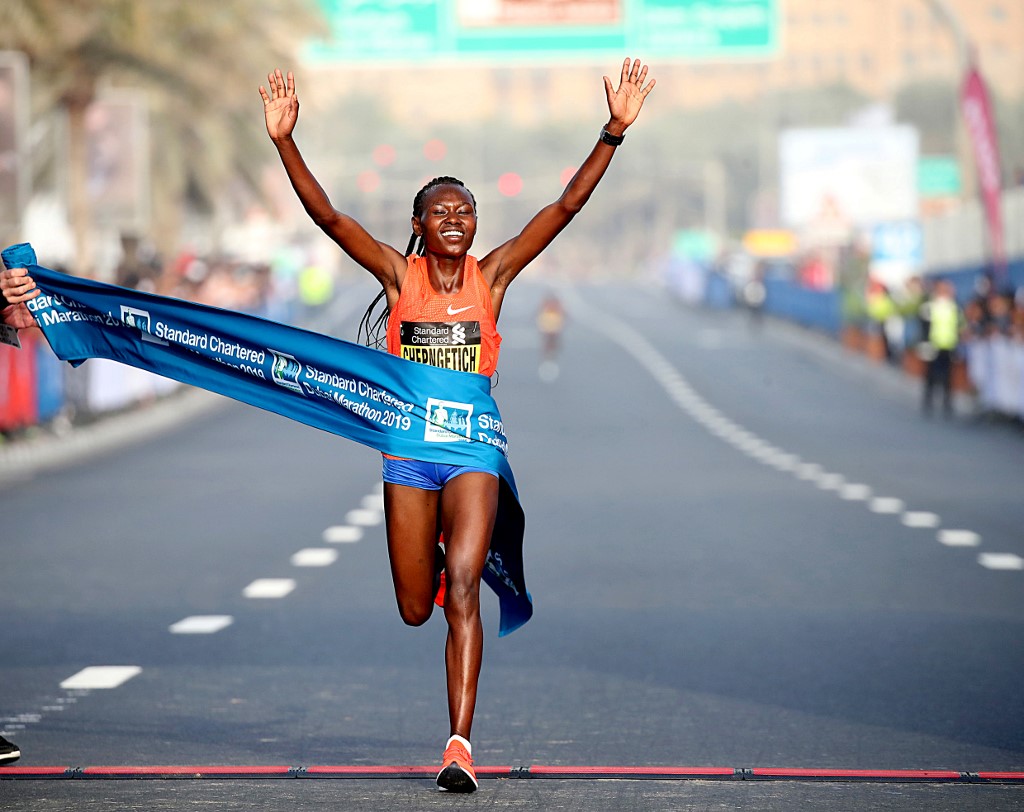 If you are one of the 30,000 runners expected to line up for the start of the Standard Chartered Dubai Marathon at 7am on Friday, January 24,and are perhaps now wondering whether all that training and the anticipated agony of the 42.195-kilometer slog that lies ahead of you is really going to be worth it, relax.

Right now, the decision to enter Dubai’s 20th anniversary marathon – perhaps taken in the heat of the moment after the inspirational course record-beating runs last year by Getaneh Molla of Ethiopia and Kenya’s Ruth Chepngetich – might seem a little rash as you count down the days to the start and wonder whether you should be tapering your training, putting on a few last long runs in desperation or coming up with an excuse to pull out.

More on all that shortly.

But this month amateur marathon runners everywhere have been given a psychological leg-up by research showing that, for a new runner, training for and running a marathon cuts about four years off the “vascular age” of their arteries.

Now, let’s not kid ourselves. After pounding up and down Al Sufouh and Jumeirah Beach roads for hours on the 24th, you will never look at the Palm or the Burj al Arab in quite the same way ever again.

By the end your legs will feel more like jelly than bone and muscle, your blisters may well have spawned blisters of their own and you will probably be convinced that your days of using staircases are at an end, for good.

But then, if it were easy, you’d miss out on surfing the unbeatable wave of euphoria that will sweep you up as you stagger over the finish line, hero for a day to friends and family and suddenly and miraculously impervious to the pain and exhaustion that threatened to overwhelm only a few hundred meters back down the road.

If you enjoyed the feeling of smug superiority during all those long hours spent training, then you arevgoing to be unbearable – and deservedly so – on the afternoon of the 24th.

And to the enormous sense of achievement you will experience you can now add the knowledge that, rather than having shortened your life – which is how running 42.195 kilometers can often feel – you may actually have extended it.

We’ve all read the stories of runners who have collapsed and died during marathons. The reality is that in almost all cases they have fallen victim to a previously undetected underlying heart problem, which is why it makes great sense to follow the advice of the Dubai marathon organizers and go for a medical check-up before embarking on marathon training.

And if you are suffering from a cold or any kind of respiratory illness on the day of the race, that’s your entirely valid excuse to back out, right there. There’s always next year.

But for most people what they gain from any kind of exercise far outweighs the risks and, according to a study published in January 2020 by researchers at Barts and University College London, the benefits of training for and running a marathon repay the commitment in spades.

The researchers looked at 138 healthy, first-time marathon runners who took part in the 2016 and 2017 London marathons, examining them before training began six months ahead of the race and again some three weeks after the big day. All the participants, men and women with an average age of of 39, had no history of cardiac problems and when training began were not running more than two hours a week.

Measurements taken by the research team included blood pressure and an assessment of artery “stiffness” or elasticity, measured using magnetic resonance imaging (MRI) scans. “Biological aortic age” was calculated as a product of the relationship between the participant’s age and aortic stiffness as measured at three points along the aorta, the main artery through which blood is pumped from the heart to the rest of the body.

Even the researchers, who published their findings in the Journal of the American College of Cardiology, were surprised by what they found.

The participants in the study were far from being super athletes. They ran between only six to 13 miles a week in training and went on to have average marathon finishing times of 5.4 hours for women and 4.5 hours for men.

Yet not only did they all experience significantly reduced blood pressure but they also achieved improvements in aortic stiffness equivalent to an average four-year reduction in “aortic age.”

In other words, tackle a marathon when you are at 30 and after six months of training you’ll have the arteries of a healthy 26-year-old.

The study, says Dr Charlotte Manisty of the UCL Institute of Cardiovascular Science & Barts Heart Centre, “shows it is possible to reverse the consequences of ageing on our blood vessels with real-world exercise in just six months”.

The even better news for couch potatoes facing the challenge of their first marathon is that the study found that those who were the least fit to begin with, along with older runners and those who ran slower times, actually benefited from the most improvement.

For clinicians, says Dr Manisty, the study provides solid evidence that “making a goal-oriented exercise training recommendation – such as signing up for a marathon or fun-run – may be a good motivator for our patients to keep active.”

Furthermore, she says, the study “highlights the importance of lifestyle modifications to slow the risks associated with ageing, especially as it appears to never be too late, as evidenced by our older, slower runners.”

So, with only days to go to the start of the Dubai marathon, should you be putting in a few last-minute panic distance sessions? Absolutely not. Remember, the subjects in the UCL trial were running no more than 13 miles a week in training.

That sort of mileage probably won’t put you in contention for the US$100,000 first prize for the first man and woman over the line and you can certainly kiss goodbye to the bonus US$200,000 on offer for anyone who breaks the male or female world record.

But it will get you round the course and piling on the training kilometres at this late stage in the game is a surefire way to cripple your chances of going the distance on the big day.

So enjoy a pasta dinner the night before, have a bagel with honey and a banana for breakfast at least two hours before the start, trim your toenails (unless you want them to go black and drop off), make good use of the toilets before the gun, drink little and often throughout the race, don’t be tempted to storm off with the pack at the start, stick to your planned race pace (write your kilometer splits on the back of your hand) – and, above all, enjoy yourself.

You might feel like you’ve aged by 20 years for a few days afterwards. But as you hobble into work on Sunday, rest assured: inside you’ll be four years younger.

Today is Day 2 of the Livehealthy Festival. See the full schedule here