Menu
The crowds making their way through Abu Dhabi Art over the weekend were varied, as they often are in the UAE, and from all over the world. 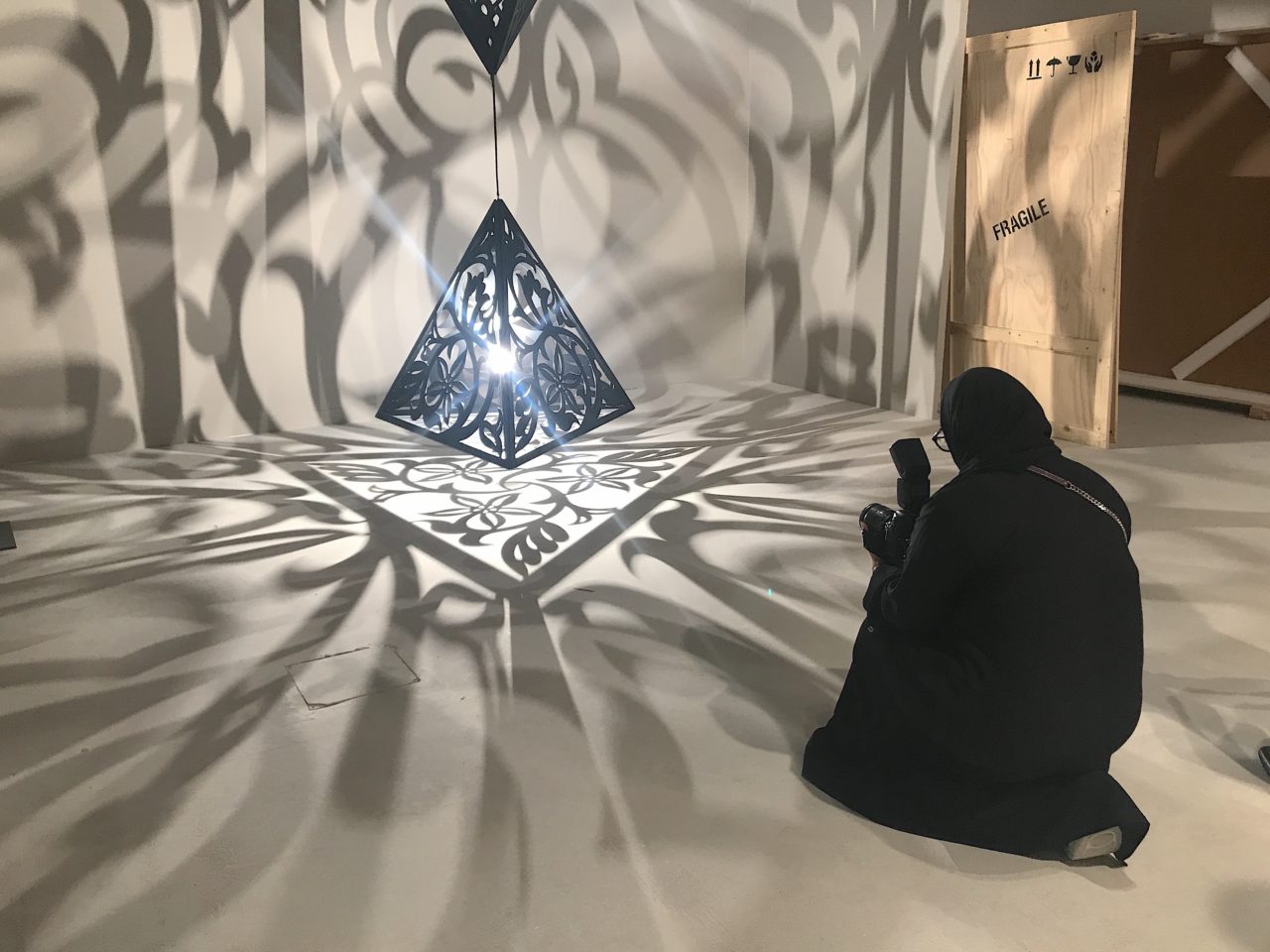 The crowds making their way through Abu Dhabi Art over the weekend were varied, as they often are in the UAE, and from all over the world. Snippets of various languages layered over each other as many of those who strolled through the 10th edition of the event, held at Manarat Al Saadiyat, kept their phones in hand, ready to capture, and perhaps Instagram, those pieces that spoke to them. Others kept their arms folded across their chest, leaning in to whisper to their friend or partner or child about the painting or sculpture in front of them.

So many, too, were alone, spending long moments gazing at pieces, like Khalid Ben Slimane’s 2018 conical ceramics work Le 99 noms de dieu at Elmarsa, or Sadik Kwaish Al Fraji’s Stages of Acquiring Knowledge at Ayyam Gallery, moving to shift their view by just a few footsteps to the left or right.

Throughout the galleries at Manarat Al Saadiyat there was, as there always is at these events, a refreshing, palpable buzz – a higher vibration in the air, if you will. It’s the kind of feeling that comes from engaging with that which has been created by another soul, something dreamed up from deep in their imagination, right out of thin air.

The best way to describe it comes from, Picasso, who said: “The purpose of art is washing the dust of daily life off our souls.”

There is a lot of research out there about how good creating art can be for your wellbeing and mental health. Earlier this year, for example, researchers at the University of Brighton in England conducted a review of research that found everything from painting to pottery helped reduce depression and anxiety and boost overall mental health and positive feelings.

But this benefit can be attained simply by being around art, too, through a simple trip to the one-year-old Louvre Abu Dhabi, any one of the UAE’s growing number of galleries or an annual event like Abu Dhabi Art or Art Dubai.

In 2012, the Nord-Trondelag Health Study surveyed 50,000 men and women in Norway, finding that those who made sure to do regular cultural activities, such as visiting a gallery or museum, or taking in a live concert or going to a film, reported lower rates of anxiety and depression and higher levels of health and happiness than those who didn’t. Two years later researchers at the University of Arkansas surveyed 10,000 students who had taken a field trip to an art museum and found the majority improved their critical thinking skills, scoring higher on tolerance and empathy.

And in 2011, a neurobiologist at University College London scanned the brains of volunteers as they looked at 28 beautiful, powerful works of art from masters including Botticelli and Monet. The emotional impact he observed, scientifically, was similar to that of falling in love. That release of dopamine, known as the “feel-good” transmitter, professor Semi Zaki told The Telegraph at the time, was immediate.

Back then, Zaki told the paper: “There have been very significant new advances in our understanding of what happens in our brains when we look at works of art.”

Seven years later, a study conducted this summer at Boston College delved deeper into this topic, looking at one aspect of why people prefer looking at an original painting over a copy.

“We like to look at original works that we know were made by the artist,” concluded the study, dubbed Essentialist Beliefs in Aesthetic Judgments of Duplicate Artworks. “And this is because it makes us feel like we are communing with the artist’s mind, soul, heart and essence.”

Having found that engaging with art is good for you, science has more recently shifted into examining just why it is that we like the art that we do, in a field known as “experimental aesthetics.” According to a report in the Sydney Morning Herald in July, are more than two dozen studies on the subject are underway on the subject in the US alone.

“Philosophers have grappled with questions about the arts for centuries, and lay people have puzzled about them too,” Ellen Winner, a professor who led the Boston College study, told the Herald. “Now, psychologists have begun to explore these same questions, and have made many fascinating discoveries.”

Back at Abu Dhabi Art, Dubai’s The Third Line was one of 46 galleries participating galleries. As gallery manager Milica Nestorovic sat in the bustling space, she gestured to the people milling around her.

“Sometimes they don’t even pay attention to us,” she said. “They are just captivated.”

The idea of constant progress in creativity through art is relatable with each visitor’s own experience, which can come as bit of a surprise to them, she said.

“They have their own very sincere opinion no matter what the outcome would be, so they feel super-free,” she said.

That aspect resonates with Emirati Hussain Almasooawi, who gave a short talk Saturday afternoon about his installation Growth, 2018, a diptych of digital photographs of Abu Dhabi.

“I think art has nothing to do with right or wrong,” he said. “You don’t have to be harsh or critical. You can simply like it or not like it, without being judged.”

Some people can be hard on themselves – and others – when it comes to the viewing process, but it shouldn’t be that way, he said.

“If there is a piece in front of me and I don’t like it, it doesn’t mean it’s bad,” he says. “It’s just I personally don’t like it… if something moves you, for you it’s great. Sometimes it moves you, sometimes it’s scary, sometimes it’s fascinating, so it gets all those emotions out of you. But at the same time it does engage at an intellectual level sometimes. It’s kind of fluid. And that fluidity is healthy.”

Ayesha Almazroui, who as head of a new Arabic video platform Mohtawaae was on hand looking for subjects to film, believes the allure is two-fold.

“Art has the power to take you inside the piece, whether it’s a novel or a painting or something else, at that moment you look inside that,” she says.  “And that’s a powerful thing for someone who consumes art like me.”

But there are also the aspect of witnessing the process and result of another person’s ability to create a different reality through art to consider.

“For an artist, there are so many studies about how art can take all the negative energy and just put it all there,” she says. “They can just take out their negative energy and put it in their work. At Abu Dhabi Art you can see so many paintings that have emotions. You can feel from the painting how the artist feels. And that’s how art makes them feel better.”

Guillaume Excoffiar, a tourist from France, drove down to Abu Dhabi Art from Dubai with the friend he flew over to visit. For him, the benefits of a Saturday afternoon wandering around a gallery can be more personal than changing brain chemistry or the elicitation of an empathetic response. There’s physical activity involved, for one thing, while art can help you see other sides of those most important to you.

“It’s good for your body simply because you are walking around, often with the people you care about, as opposed to sitting watching television or having a meal,” he said.

And viewing art is mentally healthy as well, simply because it changes the conversations we have with our relatives, friends and family.

“Rather than at dinner, when you talk about the food, or daily life, it’s an occasion to engage on other topics you don’t necessarily talk about,” he said.

Rad Roller: 5 ways to foam roll (or ball) out your body's fascia post-workout