Menu
It’s 10pm at the Kibo Hut, which sits at an elevation of 4,750 meters above sea level in the Kilimanjaro National Park in Tanzania. There are 22 women, including me, all sporting Gulf for Good-branded yellow duffel bags and hiking backpacks and we are packed like sardines into a tiny room at this final camp before the mountain’s summit.  In two hours, at midnight, we will begin our slow, arduous trek up to the 5,895m Uhuru... 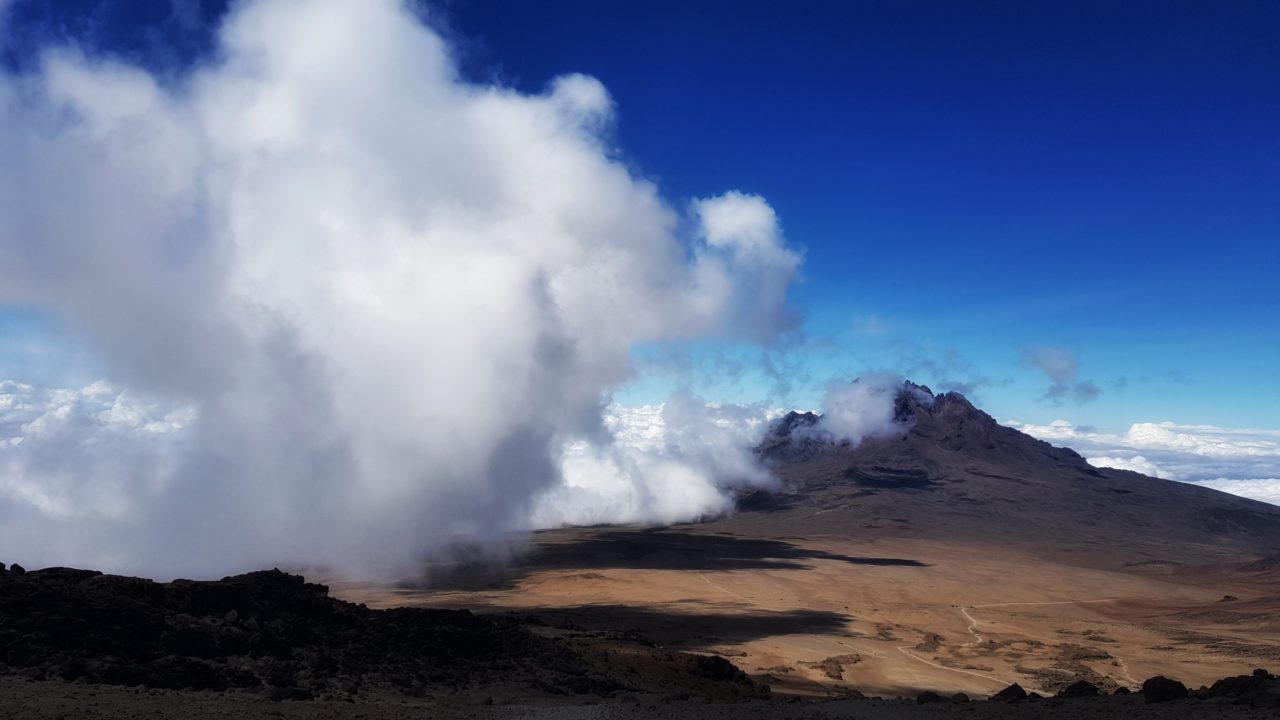 At the top of Mt Kilimanjaro/Afshan Ahmed

It’s 10pm at the Kibo Hut, which sits at an elevation of 4,750 meters above sea level in the Kilimanjaro National Park in Tanzania. There are 22 women, including me, all sporting Gulf for Good-branded yellow duffel bags and hiking backpacks and we are packed like sardines into a tiny room at this final camp before the mountain’s summit.

In two hours, at midnight, we will begin our slow, arduous trek up to the 5,895m Uhuru Peak. As we make our way to Africa’s highest point, located on the world’s highest free-standing mountain, the temperature will plunge to an extremities-numbing –15°C.

We had reached Kibo in the early evening, after spending all day walking up to an elevation of 4,700 meters from the Horombo Hut campsite. Gulf for Good, the Dubai-based non-profit that helps to fund community projects by coordinating challenges in various countries all over the world, had selected the six-day Marangu route, which starts at the Marangu Gate on the south-east side of Mount Kilimanjaro.

There are several other routes to get to the top, but this is the only one that has hut accommodation along the way. The number of climbers per day is capped at 60 to 100 to prevent overcrowding at the camps. As one of the most popular routes, many people believe it is the easiest. They are mistaken and it’s why this route has a low success rate.

This trip was several months in the making for me. Growing up I suffered from anorexia and bulimia, which consumed most of my energy and mental capacity. I managed to take control of the eating disorder a few years back by focusing on goals that involve self-care and by surrounding myself with like-minded people. Nowadays, I’m always looking for ways to push my physical boundaries.

Not having done an endurance-based trek before, Mt Kilimanjaro seemed like a good opportunity to embark on a new outdoor sport. I was motivated to do it with Gulf for Good to support educating children in Tanzania.

Since I signed up last December, the key to preparing was to gradually introduce more aerobic training to complement strength and resistance workouts. While there is no way of knowing how altitude will affect you until you experience it, building a strong cardiovascular system helps the body to make more efficient use of limited oxygen and increase the chances of succeeding in reaching the summit.

In the months leading up to the climb, our group spent weekends climbing up to 60 floors of tall Dubai towers, taking day trips to wadis in the Northern Emirates and doing slope training at Ski Dubai, to prepare for the different terrains and steep walks that we were going to encounter. In the gym, I continued with my resistance training, concentrating on exercises like hip thrusters and extensions, lunges, calf raises, leg curls and squats to strengthen the quads, hamstrings and glutes. To ensure that I wouldn’t tire easily while carrying a backpack each day, I also incorporated shoulder presses, back and shoulder flys, and situps for the core.

Summiting any mountain is as much a mental challenge as it is a physical one. To help protect and preserve both, a team of guides, porters and kitchen staff accompany us. They are trained to spot the earliest signs of altitude sickness and cheerfully encourage us along the journey until we are safely back down.

The national park has a mountain rescue unit. All guides undergo mandatory safety training on the terrain in order to get their license. Every climber is accompanied by one guide. In bigger groups the ratio is one guide to two climbers. There is also a 4×4 ambulance truck at the Horombo Hut and rangers at several locations to evacuate sick climbers.

The guides can only carry on doing their risky jobs with such high frequency during the peak season if they themselves are fit and well looked after. The Marangu Hotel, where we spent a few days before and after our climb and which had organized our team of guides, are partners with the Kilimanjaro Porter Assistance Project (KPAP). This non-governmental organization helps safeguard the rights of porters. A KPAP monitor accompanies every climb organized by a KPAP partner company to keep an eye on the porters and report on their condition. Along with making sure they receive a minimum wage, there is a 20kg limit on baggage they can carry on the mountain. They are required to have three meals a day during the trek, proper shelter, appropriate clothing and equipment for the climb, and care if they are injured or fall ill.

From the time we set foot in the national park to when I stepped out of it a week later, I was flanked on either side by guides who know the mountain so well and are so adept that they could run up and down blindfolded and in sandals if they wished. “Hakuna Matata” (Swahili for no problem) is not just a sing-along from The Lion King but a true mantra for them.

Climbers, even the fittest of them, learn very quickly that the only way up is to leave ego at the gate and take things “pole pole” (slowly, slowly). Our guides would keep us in check, constantly reminding us to slow down to conserve energy, stay hydrated and eat often – the key ways to naturally combat altitude sickness.

Despite the continuous walking over several days and the elevation, which can test your mental grit, climbing Mt Kilimanjaro is a “doable” challenge for those with a moderate level of fitness looking to pursue a new outdoor passion.

An estimated 35,000 to 50,000 people attempt the climb each year, mainly from June to August and December to March. Some routes can be overcrowded but over the years Kilimanjaro National Park has introduced checks to ensure safety. There is also a strict no litter policy and this year Tanzania banned the sale and use of single-use plastic bags.

Climbers pass through five mountain zones: lower slopes, montane forest, moorland, Alpine desert and Arctic, each offering different sights and sounds. The trek began with a stroll through the rainforest, where twisted, ancient trees form a canopy overhead, keeping the temperature balmy throughout.

We stopped often to take pictures of native animals like blue monkeys and white colobus on the way to our first camp.

After a chilly night there, we set off in the morning for Horombo Hut (3,720m), crossing the rocky trail over the moorlands in erratic weather.

With no more cover, sunburn can be a big problem here, so we were made to reapply sunscreen and stay protected with hats and long-sleeved, moisture-wicking clothes. The eight-hour climb was pleasant and soon we began to see the mountain’s dormant volcanic cones.

We spent two nights at this camp, with one short day hike for acclimatization, before embarking on our early morning climb to the final camp site.

Exhaustion had begun to set in but spirits were still high. After arriving at Kibo in the evening, we ate an early dinner and grabbed a few hours of rest before beginning our summit journey at midnight.

Sleep is not guaranteed at 4,700m, no matter how tired you are. Fully kitted out in more than six layers of warm clothing, I managed to squeeze into a small space on the series of mattresses in the hut, still shivering and counting down the hours anxiously.

The summit of Mt Kilimanjaro

The time had come to put all those months of preparation to the test. We lined up with our guides in between us and, with labored breath, walked in single file all through the night until sunrise. I struggled with the cold, feeling as though my fingers and toes were about to fall off.

I walked slowly, falling out of line often to relieve my bladder or sip on water, and then falling back in the line snaking up the mountain with no end in sight.

There was no chatter: many people opted to listen to podcasts and music on their phones as a diversion from the pain. My biggest challenge during the final ascent was fatigue and the freezing temperature.

I kept my gaze firmly on the ground, taking every step cautiously, especially in areas covered with scree, or broken rock fragments. And I reminded myself over and over that it would end in the morning.

Having managed to avoid major health issues, my biggest problems were a terrible lingering migraine and nausea – both common at high altitude.

I made it to Gilman’s Point, the first summit point on the rim of the crater and where climbers are certified as having summited Kilimanjaro. However, those who still have the energy go on to attempt the Uhuru Peak, the the highest point. I went for it. It took me another two hours.

One of the things that no one warns you about with mountain climbing is that the way down is a lot harder. Downhill is always more taxing on the knees, not to mention all that dangerous scree to navigate.

Add to that the feeling of sheer enervation after several days of climbing uphill. I vividly remember a point when we were back down the mountain and on our way out of the park where I stopped, turned to my guide and said that I couldn’t take another step. We were only 10 minutes from the gate.

People who choose to take on such physical and mental challenges are often asked what drives them to do it. It’s not so much about the experience as you are living it, which at the time feels impossible, but the sense of renewal and resilience that you return with.

In the end, yet again, my body proved its ability to adapt with every obstacle and my mind did not fail in powering through even the most uncomfortable and daunting situations.

How to stay healthy

Drink lots of water, at least 4-5 liters a day.

Carry high-carb snacks and eat frequently throughout the trek.

Be very careful to protect yourself from the sun with proper clothing, hat and sunscreen.

Take hiking trips in the Northern Emirates during the winter months.

The wellness retreat trend with a focus on fun

Workplace wellness: ‘People need to be inside healthy environments’