Menu
Vogue Fitness has expanded from CrossFit to a digital marketing, physiotherapy – and a cafe.

Billy Graham and Patrick Hegarty were working for an engineering firm and playing rugby for the Abu Dhabi Harlequins when they started doing CrossFit years ago. They both got their CrossFit certification, started holding boot camps, scouted for a location and in 2014 opened their first gym: Vogue Fitness/CrossFit Yas in Yas Marina.

The partners’ enterprise has been on a relentless growth spurt ever since: that first location has since expanded to four CrossFit boxes, and a ladies’ and outdoor gym. There is also a personal home training business and Vogue Fitness branches at Al Muneera, Al Ghadeer and Cleveland Clinic. They opened in Jumeirah Lakes Towers in Dubai last year and have plans for Ras Al Khaimah this year. In March, they will open their new location at Marina Mall in Abu Dhabi. No wonder their tagline on Instagram is “WE ARE WHAT’S NEXT.”

One reason for their success? The pair were well ahead of the “gym as social hub” trend, which has since exploded worldwide and in the UAE. When Hegarty moved to Abu Dhabi, for example, he realized that his social circle revolved around the rugby team.

“My only alternative as an expat was to play rugby or go to brunch,” he said. “That was when we decided to create a fitness community… we wanted to create something here that you can do three, four, five, six, seven times a week, and so you have got your work life, home life and this is your fitness life.” 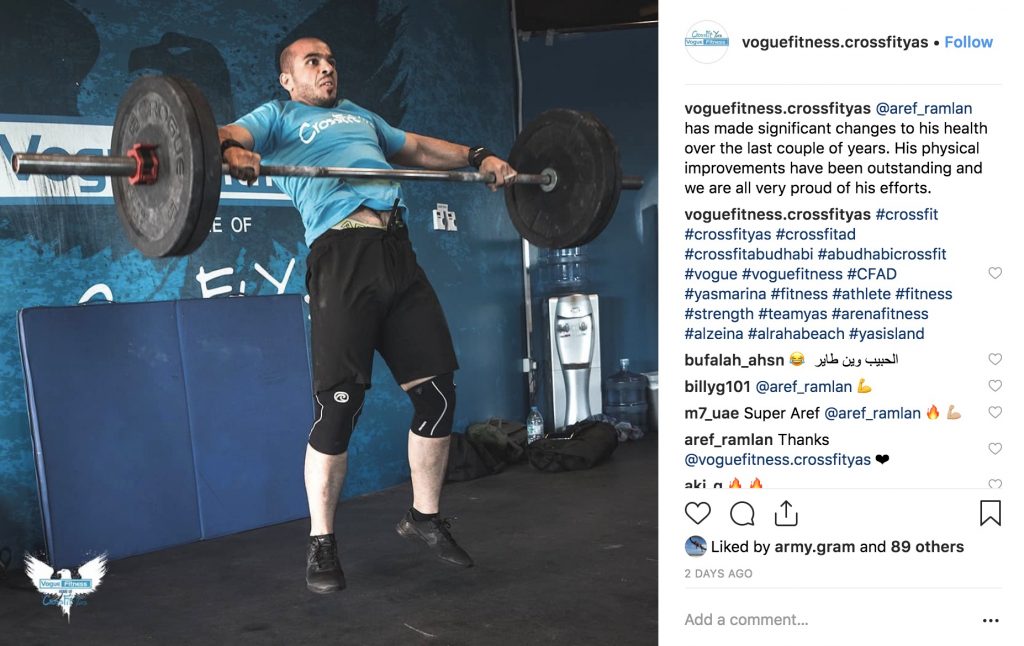 “Fitness and fun” was their philosophy from the start, with a focus on community, uniqueness and excellence.

“We have centered everything around those three pillars,” he said. “It is a constant reminder to us to try and stay ahead of the industry, offering what no one else is offering, driving value.”

As part of that effort, they added unlimited classes for their Dh999 monthly membership, yoga, indoor cycling and kids sessions, as well as community days and beach workouts. Members are free to attend any location. The Vogue vibe has also attracted a customer base that is 60 percent Emirati, said Hegarty.

“Sometimes, we have royal family members coming in — we don’t even know that they are royal family members because they give different names. [And then there are] some very high-society Emiratis. And honestly it doesn’t matter. They pay the same fees, they are treated the same as everyone else,” he said. “They are there for a reason, for us to teach them so that they can get fitter and healthier.”

That means the gym has been able to break down some of the UAE’s lingering cultural barriers along the way, as there still aren’t many fitness platforms where expats and Emiratis mix, he said.

“We actually meet and talk to each other,” he said. “Everyone gets along really well.”

Among their three dozen-plus coaches are top CrossFit athletes, including the couple Elliot Simmonds and Jamie Greene. They travelled to the US last summer to compete in the CrossFit Games, essentially the world championships of the sport.

Spotting gaps in other markets that complemented their gyms, in the last three years the Vogue owners have ventured well outside CrossFit.

In 2016, frustrated with the cost and capability of the social media and digital marketing on offer in the UAE, they decided to do it themselves and opened DigitalFarm.ae, also at Yas Marina.

Last year, again at Yas Marina, they added Boroughs, a specialty coffee shop that sells healthy smoothies and juices, muffins (the paleo Gluten Free Apple Muffin uses coconut flour, almond flour, and apple puree) other breakfast items including protein pancakes and snacks, like their new sweet potato slices topped with a variety of items, such as smashed chickpeas or guacamole. It’s a clever move, offering convenient fuel to the assortment of busy, hungry athletes passing by the the ground floor location after they’ve just burned off hundreds of calories upstairs. The manager, Kelly Stoekle, who was a regular at Vogue even before joining the team, is continually experimenting with items and keen to change things up seasonally.

“We try to provide better alternatives for people who are used to processed sugary foods and we believe that homemade is always better than store bought,” said Stoekle.

There were plans to open a physiotherapy clinic, but they’ve been shelved to pursue the location in Ras Al Khaimah. Vogue also merged with another local fitness company, Discover Sports, and has an events and memorabilia arm called Impulse Decisions. And they’ve got a big eco-ethic, with DigitalFarm.ae managing director Tom Dillon launching Plastic Free UAE on social media last year. But as they cruise toward 100 employees and further expansion, the owners said they remain focused on everyone who walks through their doors looking to get fitter.

“You can’t just hide,” said Hegarty. “You are going to have a little bit of fear, but you have got to face that and get out of your comfort zone.”

Among their clientele is a range of success stories, including those who’ve lost tens of kilograms and successfully tackled their health issues.

“We have had amazing stories of people… [who have cured] a range of illnesses. They have gotten off medication; they don’t have to rely on taking pills everyday now. They are sleeping better, they are happier and positive,” said Hegarty. “They have a community of like-minded people who help support them to do that.”

Editor’s note: This article has been edited to reflect a change in business direction since the interview took place.

Bounty Beets is the latest gluten-free cafe in Dubai