Menu
After weeks of confinement to our homes, a tour around a farm, surrounded by greenery – even if only virtually – sounds especially appealing. And that is exactly what you will get if you tune in on Wednesday, May 6, for the first of a special online series of live talks from Flow Dubai, the healthy eating hub. Kicking off the special-for-Ramadan series is Hemant Julka, co-founder and head of operations at VeggiTech, a start-up... 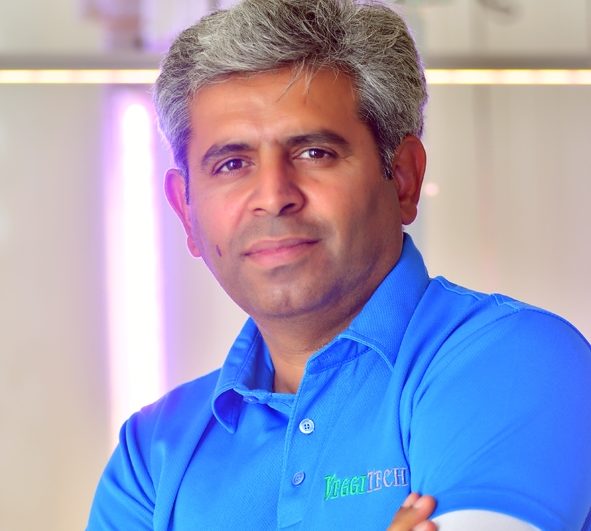 After weeks of confinement to our homes, a tour around a farm, surrounded by greenery – even if only virtually – sounds especially appealing.

And that is exactly what you will get if you tune in on Wednesday, May 6, for the first of a special online series of live talks from Flow Dubai, the healthy eating hub. Kicking off the special-for-Ramadan series is Hemant Julka, co-founder and head of operations at VeggiTech, a start-up company where high tech meets agriculture and the aim is to turn the UAE into a major food producer.

Julka is a pioneer of vertical farming – cultivating vegetables and fruit in towers instead of flat plots, without soil and with LED lighting in place of the sun.

“It’s a misnomer that plants need a lot of sun,” he says. “For photosynthesis to occur – that’s the process by which plants produce their food – what plants actually need is the right kind of light between infra-red and ultra-violet. And that’s what we at VeggiTech provide.”

The first farm  is at Al Zubair in Sharjah, where a 1,000-square-meter plot can yield the same amount of crops as 2,500 square meters of conventional farmland. VeggiTech now has four farms, comprising 25 acres and there are vertical indoor farms farms on two of the sites, producing  many of the leafy greens and herbs that the UAE normally has to import.

Julka is convinced that this kind of farming is the way forward for the UAE and other countries with harsh climates and poor soil.

“We don’t need soil because the plants take root in water infused with exactly the right nutrients. Every plant gets perfect nutrition –  it’s tailor-made,” he explains. “Our water needs are only five percent of what conventional agriculture uses and we get 40 times the yield. And since we’re not growing in soil, there is no need for pesticides.”

There is also a taste bonus, he adds. “Imported vegetables and especially micro-greens – the baby vegetables that are so popular with restaurants – lose flavor during transportation times. We aim to provide vegetables direct from the farm to the kitchen within a matter of hours, with none of the nutrition or flavor impaired.”

As well as the vertical indoor farms, VeggiTech is pioneering the use of greenhouse with controlled temperatures. But wait – aren’t greenhouses for cooler countries so they can grow fruit and vegetables that need warmth? Why does the UAE need them?

“These greenhouses are cool greenhouses,” Julka explains. “They are lined with a material called airgap. It looks like bubblewrap but the pockets are filled with nitrogen and they keep the temperature inside at a constant optimum 28 to 30 degrees Celsius. “

Instead of soil, crops are grown in coco-peat (made from the pith inside coconut husks) and perlite, a volcanic rock which is very porous and can hold up to five times its volume of water.

The fruits – literally – of Julka’s labors are currently being enjoyed by the UAE’s frontline workers during the Covid-19 crisis. He has teamed up with Sarood Hospitality’s The Noodle House and chef Alannah Doe to launch Help Our Heroes, an initiative distributing free care packages of fresh produce.

“Those of us staying at home have no idea of the strain these frontline workers are under, what they are facing, day after day,” he said. “Dubai police were good enough to grant us access to ambulance service and other health workers.”

Julka is also providing 500 kilograms a day of free fresh produce to people in need in Sharjah.

“I contacted Marwan Al Sarkal, the head of Shurooq (Sharjah Investment Authority) and said, ‘Make me a list of who needs help.’ He put me in touch with Sharjah Charity Association and they provided and they drew up a list.  We are finding out what people actually want and creating great meal packages.”

If crops can be induced to grow – and grow well – in a controlled environment here in the Gulf, by the same logic, the same technology can be applied in harsh climates at the other end of the scale, says Julka. His company has already set up a satellite in Finland, where winters are long and extremely harsh and summers are brief.

“In Finland, farmers don’t have a job in winter because it’s too cold to grow anything. We are setting up an educational institute in Helsinki to train Finnish farmers in our methods so they can continue farming through the year. The aim is for Helsinki to be a stepping stone for the other Nordic countries so they can become self-sufficient in vegetables instead of relying on imports.”

Julka is a computer engineer by training but became passionate about agri-technology after a chance meeting with an old school friend in December 2018. His friend had studied technology applied to agriculture and worked with specialists from South Korea, Russia and India. Julka, who has lived in the UAE for 24 years, decided virtually on the spot to team up with his friend to establish VeggiTech.

But establishing a successful company is by no means the limit of their dreams. The company has installed greenhouses in schools, hosts school tours of the farm and runs educational courses. One special memory for Julka concerns a disabled boy who visited the farm.

“His parents told me that their son didn’t like school but since seeing the first leaf sprout on a seed he had planted, he is up at dawn and eager to go.”

The dream now, he adds, is to set up a non-profit that is funded by his for-profit business.

“With this type of farming, I believe food security is possible for every country. I’m thankful that we’re developing this in the UAE, where there is the space, the funds and the will. We’re lucky to be doing what we do here.”

How to help your children through Covid-19’s new normal

How tea can support intermittent fasting