Menu
You won’t want to miss these massive races, championships and challenges. 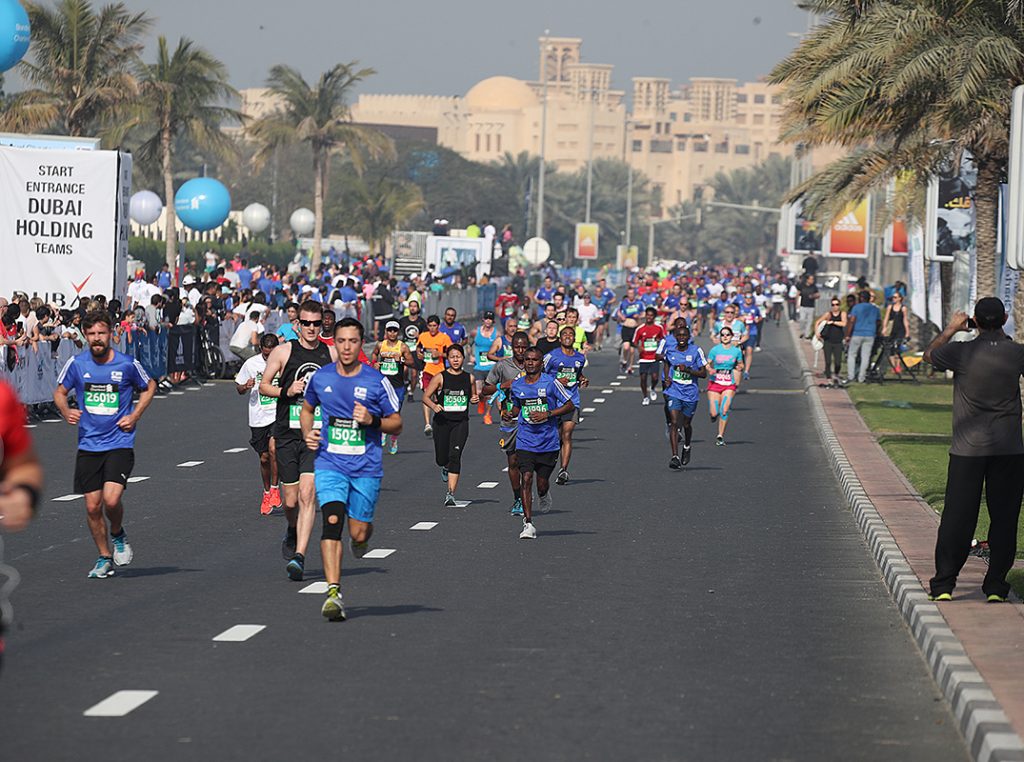 When it comes to UAE fitness events, there is a lot to choose from. From free workouts held weekly by Adidas and Lululemon, to monthly races that come with serious prizes, the region is positively heaving with things happening. Here are key dates to keep an eye on for 2019.

Whether you’re into swanky hats and smart outfits or just crazy about watching the races, this series of horse events have something for everyone. The impressive Dubai World Cup Carnival event involves 71 horse pros from 17 countries, plus local runners. This year, there’s around Dh46 million in prizes up for grabs. If you’re more of a casual race watcher, check out the Dubai World Cup on March 30. This social event has plenty of space for fascinator-wearing spectators to observe from the sidelines.

With one of the biggest prize purses around, this flat t-shaped course tends to attract the fastest of the fast. There are also various race categories for the more “normal” runners among us. The course is pretty basic, spanning most of Jumeirah Beach Road. Spectators are encouraged and race participants can be tracked thanks to an app — but we recommend getting there before the two-hour mark to watch the international runners race through the finish line.

Swanky and serene, this global golfing event is more for spectating than participating — unless you’re ranked at that top-of-the-top level. Big names, like Tiger Woods, Henrik Stenson, Rory McIlroy and Sergio Garcia, have competed in the past. For viewers, there’s a casual outdoor seating area with food and drinks, or if they prefer, VIP cabanas and tents.

It seems every time you turn a corner in Dubai, there’s another obstacle-course race. Most of the big ones happen in November and December (here’s looking at you, Spartan Arabia and Tough Mudder), with the vigorous Desert Warrior Challenge kicking off in January. But if you’ve ever wondered if you’re secretly among the best of the best, check out this Spartan event. Held in Sharjah, the race will challenge Spartan Elite and Age Group competitors in a battle for the championship title. And if you aren’t the most exceptional flame jumper / rock climber / rope swinger? Don’t worry — the race also has heats open to more casual athletes.

Around 2,500 triathletes from around the world will race in this Abu Dhabi event. The swim-bike-run competition attracts triathlete celebrities like South Africa’s Henri Schoeman and the Netherlands’ Race Klamer. If you’re tempted to get involved, there are multiple categories of different length, ranging from Super Sprint (375m swim, 10km cycle, 2.5km run) to Olympic (1,500m swim, 40km cycle, 10km run). This year, it’s the opener of the ITU’s World Triathlon Series — and in 2022, you can come back to catch the grand finale, also held in Abu Dhabi.

Held for the first time in Abu Dhabi, this global event focuses on empowering People of Determination through sport. Around 7,000 athletes representing some 170 countries are expected to participate. There’s plenty of space for spectators, but for a more fulfilling experience, volunteering is also possible.

When the heat rises to incredible levels and the thought of exercising outdoors seems insane, Dubai Sports World swings open its doors. This massive 25,000 square meter complex has almost every sporting setup you could think of. Do you want to play rugby? There are six pitches. Feel like basketball? Check out the eight courts. Tennis? Three spots to choose from. Throw in 12 badminton courts, two volleyball courts, a cricket pitch, a gymnastics area, a 14-station obstacle course, a virtual paintball park and a workout schedule heaving with fitness classes, and you’ve got one beast of a program. This space has something for everyone.

If you like your burpees with a side of kipping pull ups and prefer box jumps to long breakfasts, this is the event for you. The Dubai Crossfit Championship is an annual event that mixes together some of the biggest global names in crossfit with high-level local competitors. And if you’re not globally ranked with an aim of making the Crossfit Games, don’t worry. There’s plenty of space for spectators.

You probably are already well aware of this one and the dates are far from confirmed yet, but keep an eye out in mid-November for the UAE’s biggest month-long fitness festival. This incredible event draws thousands of participants to free workouts and wellness activities all around the city.

Pulsing music, protein samples and bodybuilders make up the bulk of this massive fitness show, held over two days at the Dubai World Trade Center — but there’s also a softer side that involves yoga and wellness panels. Participants roam between the Pole Fit competition and the many stalls selling every variety of protein goody, then linger around in hopes of saying hello to some of the biggest names in bodybuilding. Keep an eye out for the visiting international celebs — and their multiple bodyguards.

With its series of super social events hosted throughout the year, the cheerful folks of FitnessInDXB have created a friendly fitness community. Their Fittest Human event, held as part of the Dubai Muscle Show, challenges participants to battle against each other across strength, speed, agility and power. Around Dh50,000 in prizes are up for grabs. Check out @fittesthumanofficial for more.

The final race falls on December 1, when the 21-week race season wraps up at the Yas Marina Circuit, where hopefully the winner won’t have already been decided. And make no mistake: these F1 drivers don’t just drive fast cars, they are true athletes.

Known for being one of the most scenic runs, this half-marathon draws crowds and sells out quickly. The route takes you around the Dubai Creek in a figure-of-eight, past the yacht club and over several bridges — all as the sun is coming up over the water. Once the race is done, there’s a hearty breakfast at the Dubai Creek Golf and Yacht Club. The hefty, absolutely packed goodie bags aren’t so shabby either.

Unlike the F1, which wraps up the season, this tournament serves as a warm-up for the official start of the tennis season leading into the Australian Open in mid-January. It draws some huge names – the Williams sisters and this year’s winner Novak Djokovic, to name a few. It’s also a great event to fill in that tenuous space between Christmas and New Year’s, when no one is sure what to do with themselves.

The best fitness trends of 2019 aren't all that trendy

It's time for women to accept compliments