Menu
As the doors slammed on Liliosa Mercader‘s plans to run a Spartan race as part of Covid-19 isolation measures, the 39-year-old housemaid made a new plan. “I felt so sorry,” she says. “So I decided that on the same date I would do my own race.”  There is a 400m running track and a playground with monkey bars in her neighborhood, which would have been perfect for training. But then the playground closed.  So the mother-of-two from the... 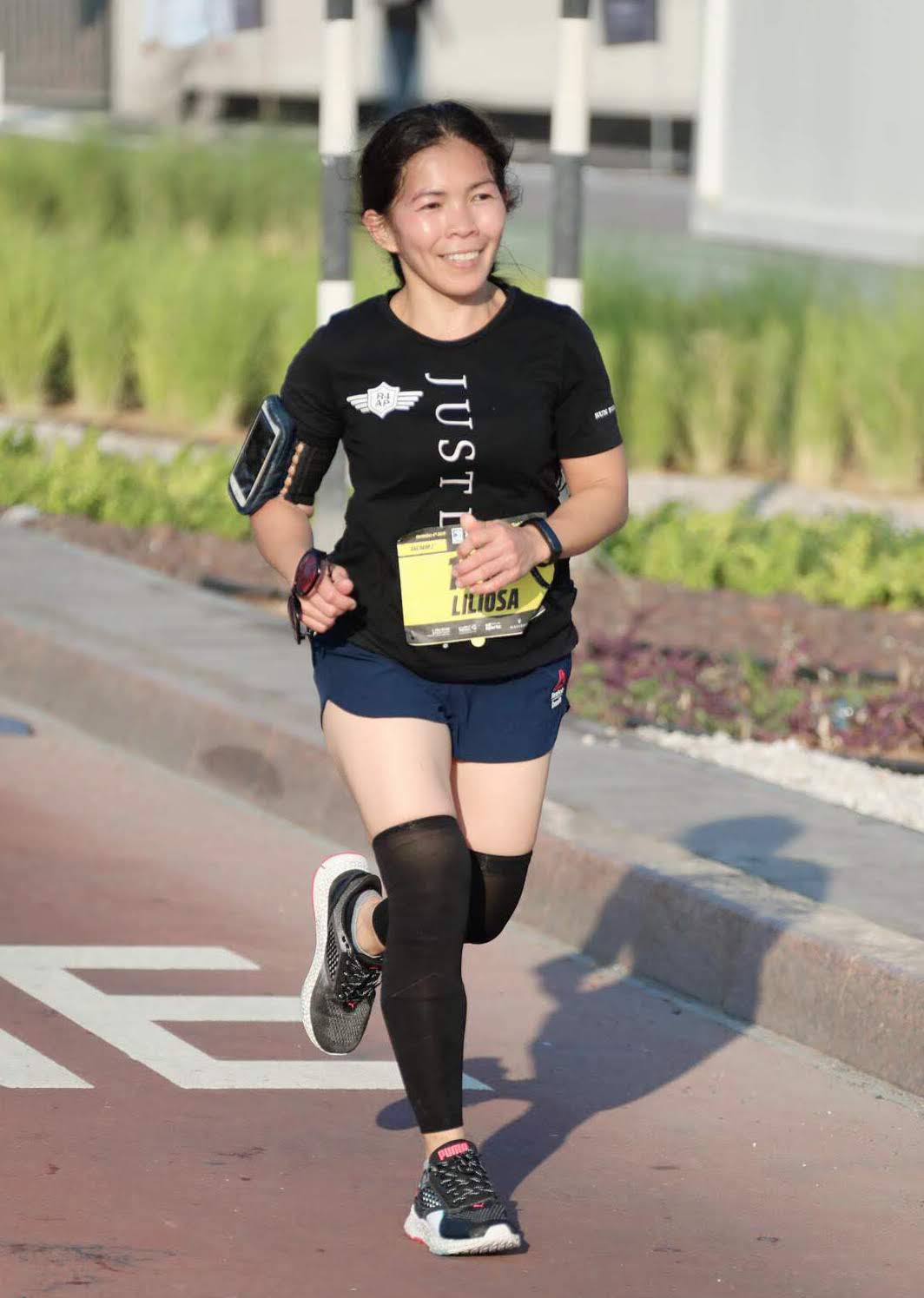 As the doors slammed on Liliosa Mercader‘s plans to run a Spartan race as part of Covid-19 isolation measures, the 39-year-old housemaid made a new plan.

“I felt so sorry,” she says. “So I decided that on the same date I would do my own race.”

There is a 400m running track and a playground with monkey bars in her neighborhood, which would have been perfect for training. But then the playground closed.

So the mother-of-two from the Philippines decided to assign herself another challenge, inspired by Spartan racing rules on missing obstacles during a race.

Then came another alert, advising UAE residents to stay indoors. But Mercader –Lily to her friends – was undeterred.

“I said ok, since it’s full self-isolation and I’m on my day off, I’ll make my own ‘quarantine’ but I’ll do something.”

It wouldn’t be her first distance race, but it would be her first time running laps for hours indoors, by herself, in her bedroom, fueled only by a live stream and sheer determination. She wasn’t sure if she could do it. She just knew she wanted to try.

Although Mercader moved to Abu Dhabi back in 2012, running is a more recent passion; she fell in love with the sport only last year.

“I got bored of going to the mall for no real reason,” she said. “One day a friend of mine did a race and I saw he got a medal. I got upset that he didn’t invite me and I started researching how I could join in.”

A member of the Active Community (UAE) gave her an entry ticket for her first official race, the NAS Night Run in May 2019.

“I was shaking,” she recalls. “I almost wanted to back out. I was alone and felt so helpless. But then I said I’m here, I can do it…” When the run started, Mercader pushed herself to join the fastest group.

“Near the finish line I wanted to give up, but then I heard a loud shout behind me saying ‘Go Kabayan, go! It’s just 500 meters more!’” She sprinted to the end.

“At the finish line my heart was down and felt so broken because I thought the medals were just for the people who finished first,” she adds.

A stranger assured her she was mistaken and helped her find where to collect her finisher’s medal. Mercader burst into tears. Another kind stranger guided her back to the marathon’s starting line to pick up her bag and members of the Abu Dhabi Sports Council running group, gave her a lift home.

“This taught me and helped me trust that I’m not alone.”

It’s a theme that comes up repeatedly during Mercader’s retelling of her running career: just how important, indeed critical, the support of others and the strong UAE community has been to her development. Just look at her first ADNOC marathon, she says.

“I wanted to join, but I was not able to register because I didn’t have a card to pay online with.” Mercader asked one of the coaches to help, suggesting that he register her and she would give him the cash from her salary.

“But the captain told me don’t worry about it, focus on my training.”

Over the next few months, Mercader joined every race she could. Her ‘training,’ she explains, consisted of playing and running around with children as part of her job.

“And on my day off, any group that was available, I‘d join it,” she says.

For motivation, Mercader would look at the times set by other runners and set herself the goal of beating them.

Her first marathon, the ADNOC race at the end of November, was a 39th birthday gift to herself.

“In the days coming up to it, I felt excited and doubtful,” she says. “And on the day of the race I was shaking because I was so nervous. But I told myself, relax, take it easy, finish and enjoy, and that’s what I did.”

As she ran, Mercader shouted at people to keep going, which she finds hilarious. “As far as I remember, I was the noisiest person on the race,” she laughs. But it kept her moving, she adds.

All of this led to that decision to run a marathon in her bedroom.

“I pulled out my box and took out my two medals: one for my half-marathon and one for full,” she says. “And I said if I still feel good after 21km, I’ll finish 42km.” Her employer loaned her extra money to buy all the supplies she would need – Red Bull, bananas, snacks, extra water – and Mercader got ready to live stream across Instagram and Facebook.

“I wanted to go live at intervals to inspire and motivate fellow runners and show them they can run any distance inside the house.”

The race even had its own name: Meyroom Road, a play on ‘my room.’

Friends tuned in to cheer her along, which helped make the six hours and 17 minutes it took her to fly by.

“I was surprised when I was done. I had planned to show a video of my country’s flag and play We Are the Champions. But goodness, I forgot,” she says, laughing.

Asked if she would do it again, Mercader hesitates.

“Maybe not in Meyroom Road,” she says, smiling. Maybe, once the self- isolation restrictions ease up, she’ll head down to ‘Sheikh Parking Lot.’

But as for running indoors, Mercader is urging all fellow athletes to do the same.

“We runners should be the first to follow the authorities and put safety first for our family, friends and the whole world. Let’s act together as one to stop spreading this virus. Stay at home to save people around the world,” she says.

“You and I, we are responsible for helping to stop this pandemic. I’ll do my part and you do yours.”

How to help the healers heal

Nursing in Covid-19: ‘I remembered I have a professional oath’