Menu
I, for one, finally met my role model. But my hero looks nothing like me. 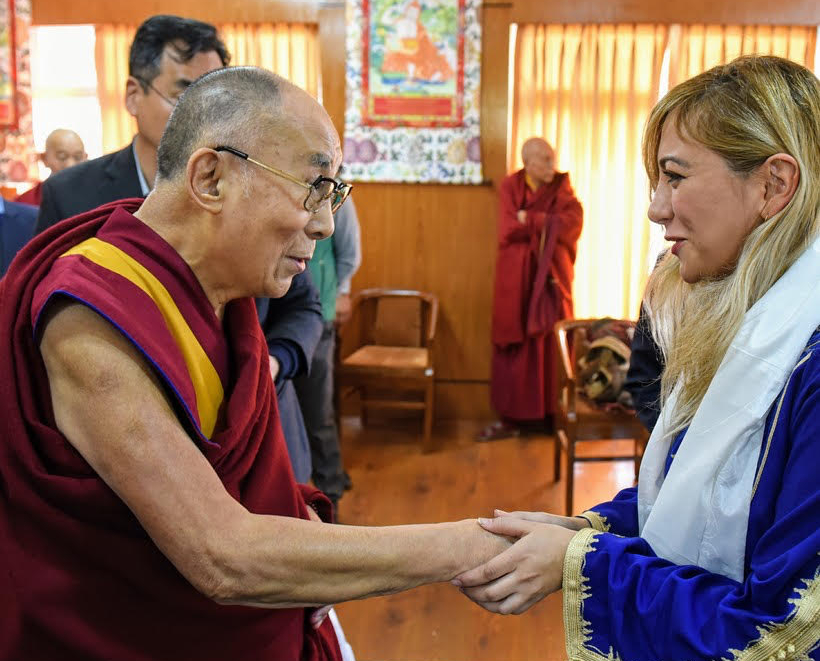 Role models are a hot topic in the Middle East. Almost everyone will tell you that to spark aspiration in the young and to have them work toward fulfilling their goals, they need to identify with someone who’s a success. But as it turns out, many children don’t have such examples. And the reason that is often proffered is because they have no one like them to identify with. Role models in the Middle East must be Arab for Arab kids, so goes the conventional wisdom. They need to be Arab women to encourage young Arab females. And they need to be Emirati or Kuwaiti for Emirati children and Kuwaiti youths, and so on. You can slice it a million ways, and people do. But how helpful is any of this?

Let me cut to the chase. I, for one, finally met my role model. But my hero looks nothing like me. And that’s just fine. Recently, I was invited to accompany 25 young peace builders from 12 conflict countries to India. The trip was organized by the US Institute of Peace, who brought us to Dharamsala. And once there, we met the Dalai Lama.

I have read his books and watched his videos, but nothing can prepare you for actually meeting the Dalai Lama. His aura calms any anxieties, and the longer you are in his presence the more you find yourself looking within for answers. When our group finally left a week later, we vowed to be “seeds of change.” I will never again underestimate the impact of something as simple as a conversation with a powerful yet utterly charming presence, as the Dalai Lama is. I saw young people from troubled countries leave with lighter footsteps. They will always have their meeting with the Dalai Lama – as shall I – as something to fall back on when times get tough. What more can you ask of your hero?

When I told friends back home I had met my role model, some were shocked. First of all, they noted, he was a Buddhist and “culturally and ethnically so different” from me. But why should any of this matter? Why does my role model have to be “like me”? After all, I come from a mixed religious and cultural background, and on practical grounds alone it would be almost impossible to find someone “like” myself.

Yet this idea of a role model that is linked to sex, to ethnicity and to nationality is something that has taken a tight hold of the region – as well as the rest of the world, if I am to be honest. In my work in youth outreach, I have been asked to come up with names of individuals of specific nationalities to introduce to young people. So, for example, in Saudi Arabia I’ve had to find Saudi men and women who might inspire youngsters there.

But this wasn’t always so. Let me take you down memory lane. If you were a child in the Middle East in the 1980s and 1990s, then you might have grown up and fallen in love with the same Japanese animation characters as I did. Many of us were influenced by the heroes in these cartoons. I for one modeled a part of my life on one of these characters. “Hello! Sandybell” was an anime series from around the early 1980s. Sandy was a young girl who became a journalist and traveled with her friends (including pets) in search of heroes and heart-warming stories. I became Sandybell, and I thank this animated character for inspiring the adventurous bug in me.

Neither was I alone. I have interviewed Arab footballers who admitted that their soccer hero from childhood was the anime character Captain Majid (originally Captain Tsubasa), whose goal kicks were phenomenal.

So, you don’t even have to be a human to be a role model. But while role models don’t have to look like you, that is not, of course, the same as saying that only people who aren’t like you can be role models. And if we truly want young people to find heroes from within their own cultures, it is actually not hard. There are many from classical times, and there are everyday heroes that often get forgotten. It isn’t only the Dalai Lama who speaks about the power of love. “There was a time when I blamed my companion if his religion did not resemble mine. Now, however, my heart accepts every form … Love alone is my religion.” That is a quote from Ibn Arabi, an Arab Andalusian scholar who lived between 1165 and 1240.

Clearly, then, there are wise people from our culture who can be examples for our young. And, of course, there are even more recent ones. But we shouldn’t close ourselves up to the wonderful examples of virtue and success to be found across the world. It is that attitude that is the difference between being open to fresh ideas and being insular. And the latter is no model for our region or the larger world.

8 places to eat vegan in Dubai and Abu Dhabi