Menu
Three very different Dubai women talk about why they love surfing and the sea – and why their community is growing. 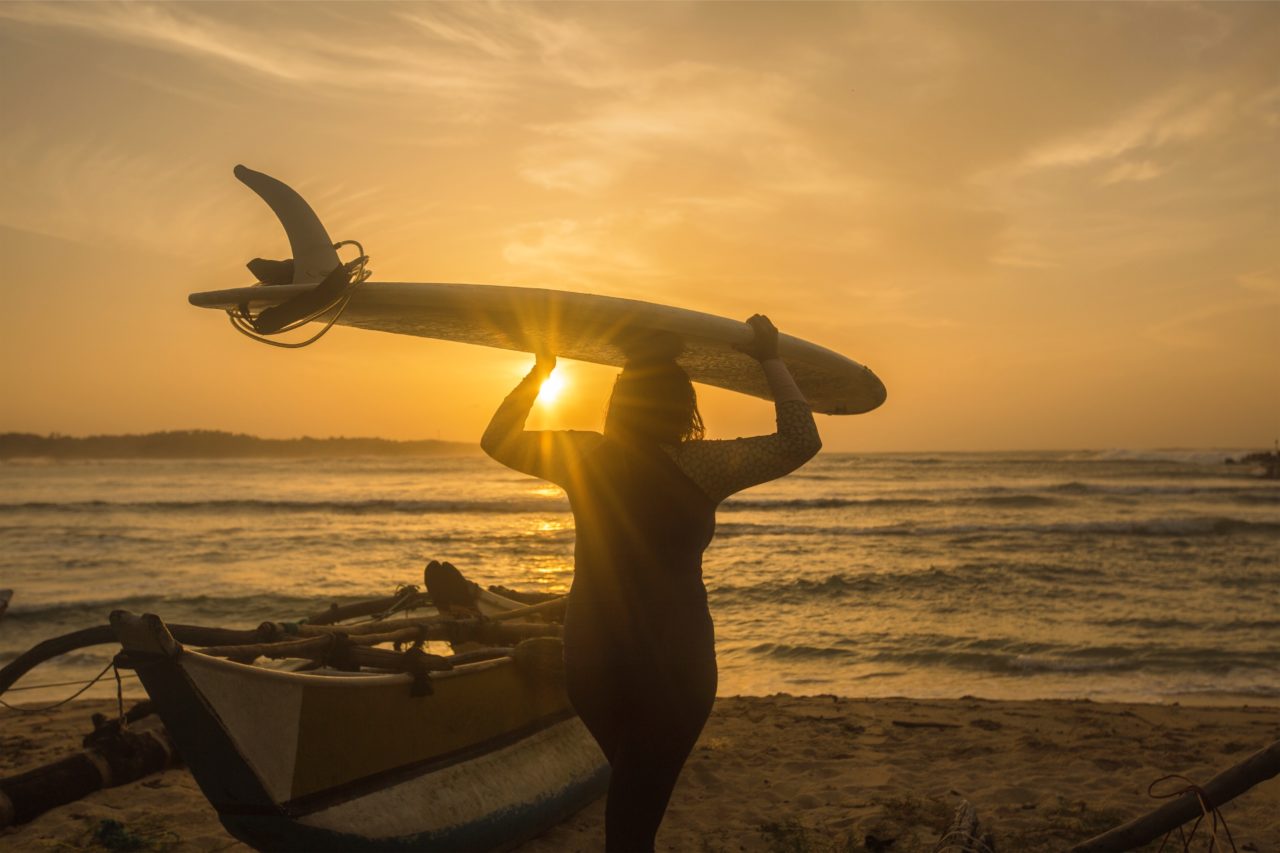 The number of ladies surfing has grown rapidly in the region, notes Daniel van Dooren, co-founder and managing partner of Surf House Dubai. “When surfing was first introduced here, we had only a handful of female surfers. It stayed that way for many years, and only in the past two or three years we’ve seen a growth in numbers.”

In van Dooren’s mind, this is due to a number of things: word of mouth; social media; and programs like those operated by Surf House to introduce people to the sport. Surfing equipment has also modernized, he adds, making surf boards much lighter and shorter — in other words, easier to manage. This growth happens at a time when globally, female surfers are making their voices heard more than ever before in the traditionally male-dominated sport. The World Surfing League has only recently announced it would offer equal pay to male and female surfing competitors — making it the first US-based global sporting league to do so. Simultaneously the number of recreational female surfers has continued to grow around the world, creating even more awareness in the Middle East.

“This has exposed surfing to a wider audience,” continues van Dooren. “Women see other women surfing, which makes more people want to get involved.”

In Dubai and Abu Dhabi, waves come and go, meaning there’s a whole mix of surfers: traditional ocean surfers; wake surfers (surfers who ride a boat to create an artificial wave); and of course plenty of travel-keen surfers. Here’s a closer look at three very different women who truly love this sport – each for their own reasons.

Izzy Abidi has a whole host of accolades behind her: Emirates Woman of the Year in 2015 for contributing to the UAE’s independent creative community; founder of Freshly Ground Sounds, an organization that set up local music performances around Dubai; creative director of Freshly Pressed; executive producer at ASLI Studios. She is UK-born, Abu Dhabi raised, Dubai-based mostly, Amsterdam-based sometimes (where she works with Netflix as media counsel focusing on the Middle East and Africa). But ask her what she loves, ask where her passion is, and Abidi will point to one thing: surfing.

Growing up in Abu Dhabi, it was only natural she found herself in the sea. Except with the capital’s lack of waves,it was more wakeboarding and paddleboarding than surf boards and barrels. All that changed in 2014, when Abidi went to Sri Lanka with a friend for a radio story on learning to surf.

“After a full day consistently falling off the board, something drew me in,” she says.

Within a year, she was back – and she hasn’t stopped since.

The waves are a bit physical, a bit meditative, a bit social and a bit sustainable, explains Abidi. That’s why she loves them. On the fitness side, surfing is an overall body workout, one that activates the core and stamina. Experts estimate the average female burns around 193 calories per hour surfing, while simultaneously developing more defined abs, shoulders, arm muscles and balance. “It’s much more enjoyable training on the beach using your body weight and in the water, as opposed to weights in the gym,” she notes. “Surfing keeps you motivated.”

Mentally, Abidi speaks of surfing almost like it’s a meditation.

“It regularly washes away any everyday micro-stresses,” she explains.

“Over the past two years, I’ve lost two loved ones and have channeled riding waves of grief, insomnia and PTSD into my surfing. Surfing as therapy has been one of the most unexpected blessings I have experienced.”

During certain times of the year (like birthdays or holidays, when memories of loved ones and loss are strong), Abidi takes extended surfing holidays.

“Very few things build up stress as long as I’m in the water regularly,” she says. “The only thing I focus on is catching the waves, or watching the horizon in anticipation of one. It forces my thoughts to the present.”

Surfing’s strong community is part of what keeps Abidi involved. She links the life to being a musician.

“Music and surfing are both universal languages regardless of culture, ethnicity and geographical locations.”

It even helps her be more sustainable and eco-aware as a traveller.

“The ultimate beauty of surfing is that the entire process leaves no trace.”

When not heading to nearby Sri Lanka or Oman for incredible waves, Abidi visits Sunset Beach around sunrise. When there’s more time and the right swell, she heads to the beach by Nikki Beach and some spots further along the cost in Umm Al-Quwain.

It’s a welcome home even if I’m still brushing sand off my feet.” She recommends the signature acaii bowl at Single Fin and a solid post-surf coffee.

“Surf House is also a great place to bump into fellow surfers, top up on wax for your board or talk about which coast you’ve returned from or where you’re heading to soon. It’s like a beach version of Cheers in the city.”

Amanda Rushforth is passionate about eco-awareness.

Ask this Dubai-raised gal about plastic, she’ll tell you a dozen reasons why it’s a disaster for our world. Talk water, she’ll tell you how to get it more sustainably (in brief: install a filter in your home). But it’s in anything to do with the sea that this UAE social media professional becomes the most passionate, bouncing between how to stop hurting dolphins to how save sick sea turtles in a single conversation.

“The water is my happy place,” she explains.

It’s this passion for the sea that got Rushforth into surfing and wake surfing — that, she acknowledges, and a very close guy friend.

“He’s from South Africa, and surfing is a big part of their sport, so I wasn’t going to get away without trying it,” she notes.

At first, Rushforth was scared, but learning to surf in Sri Lanka helped her overcome those fears. Now she surfs regularly at Nikki Beach with the team at Surf House Dubai.

“They’re great because they give you lessons as well. The instructors are pros and they make it look super easy.”

When there aren’t smaller waves to play with, Rushforth hops onto a boat for wake surfing.

“I surf because it’s a fantastic way to stay fit. It’s awesome to have that experience of being on a wave, having control over the wave, and being able to stay on the board,” she says. “But there’s also a sense of freedom and adrenaline.”

It is dangerous, she acknowledges. “I’ve chowed a few times, more than a few times when I was learning. Even now getting caught under one of those waves is something you don’t forget.” But it’s worth it, Rushforth continues.

“When you finally get one, and you pull yourself onto it and you’re riding it… Those couple of seconds are worth all the ones you don’t catch.”

Stephanie Mulet is part personal trainer, part yoga instructor, part content creator — but through all that, she’s a full-time entrepreneur. Mulet and her husband founded Wake Evo, a watersports company based out of Abu Dhabi but operated throughout the UAE. It’s the product of her passion for the sea.

“I love spending time in the water,” explains the Australian-born ex-model. “And I love board sports. So wake surfing was a natural progression.”

She began two years ago to wake surf, switching over from wakeboarding after several bad accidents. “It’s basically less painful and more fun.”

The constant wave is a huge wake-surfing draw for Mulet, particularly given the UAE’s overall lack of major surfing waves for standard surfing. Yet the community is still developing, she acknowledges. “We do have quite a few people who come regularly with us at Nikki Beach in Dubai and Anantara Eastern Mangroves, but we’re trying to build the community more. So we’re holding wake camps.” These involve weekend trips with coaching, socializing and plenty of water time.

Abu Dhabi is particularly special, continues Mulet. “I love riding in quiet places with no other boats around. The Eastern Mangroves are perfect for that. And it has the most beautiful nature, with small islands that look like the Maldives.”

Spotify’s top workout tunes of 2018: Cryotherapy, Eminem and a little Eye of the Tiger, too