Menu
The Instagram video shows a stunning bare-faced model staring into the camera as Scars To Your Beautiful by Alessia Cara plays in the background. Words begin to appear in bold black marker pen on her face and body: fat, stupid, fake, ugly and failure. But as the key changes in the song, so does the sentiment. The descriptions are replaced with positive messaging in white and red. The woman behind the concept and indeed in... 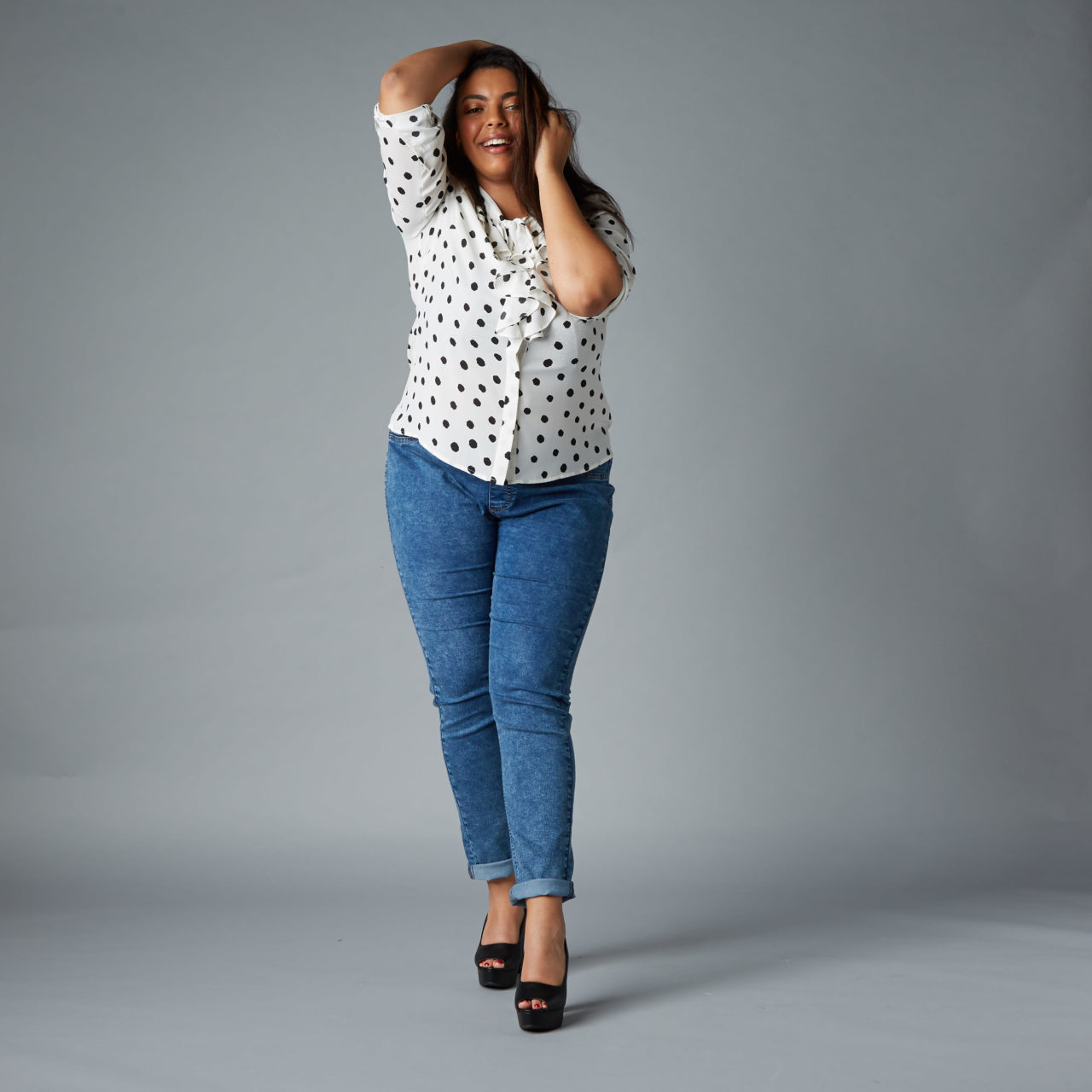 The Instagram video shows a stunning bare-faced model staring into the camera as Scars To Your Beautiful by Alessia Cara plays in the background. Words begin to appear in bold black marker pen on her face and body: fat, stupid, fake, ugly and failure. But as the key changes in the song, so does the sentiment. The descriptions are replaced with positive messaging in white and red. The woman behind the concept and indeed in front of the camera is 20-year-old, Tunisian-born Ameni Esseibi, the UAE’s first ‘curvy’ model and one of the leading lights of the body positivity movement in the Middle East.

It hasn’t been an easy ride. Just over a year ago, Esseibi had been turned down by every modelling agency in Dubai because her US size 14-16 figure didn’t conform to the requirements of sample sizes. She eventually convinced an agency that the Middle East was ready for their very own Ashley Graham. Once she was signed up, she was inundated with work from huge brands including Namshi, 11 Honoré and Mac cosmetics and has appeared on numerous magazine covers, paving the way for another 20 curvy models to be given contracts. So, what changed?

“I think it’s down to social media, and more people like me who are fighting on a daily basis to be accepted for who we are,” says Esseibi. “People are starting to understand that the ‘ideal’ body doesn’t exist. They want to see things that they can relate to in real life. They are done with the fake element of social media.”

And she’s being joined by a brigade of other influencers who are changing the social media scene with ‘honesty posting’. Danae Mercer has swapped polished and posed Instagram pictures for images that show stretch marks, bloating and cellulite. She also calls out the apps that influencers use to retouch their bodies.

“I felt a strong need to be more authentic,” says the health and travel journalist, who writes regularly for livehealthy.ae. “Everything on the platform was feeling super-perfect to me, including my own posts. And I know my life isn’t that way. So I started with a few posts, and felt a really strong connection with my community that I hadn’t felt before.”

Mercer also features in the Rock Your Ugly campaign by UAE photographer Waleed Shah. Inspired by the feedback he received after posting a topless picture of himself on Instagram, Waleed decided to explore how others felt about their bodies.

“I woke up on my birthday this January and looked at my body,” he explains. “It’s not the body I had at college when I was a top sportsman and not the body I had a few years ago when I was bodybuilding, before an injury stopped my training. I took a picture and put it straight on Instagram explaining exactly how I was feeling. I would never normally add such a spontaneous post, but it felt right.”

People reached out to Shah, and what followed was months of collecting stories from both men and women who were trying to overcome their own body image issues – whether they be scars, injuries or accepting their natural size and shape. It all culminated in a beautifully shot, black and white photography project.

“It’s about recognizing that we all have issues, we’re all in the same boat, every single person, regardless of whether they’re male or female,” explains Shah, who feels that social media is feeding the obsession society has with looking a certain way. “A lot of us know that what you see on there is not real, for the rest it should come with a disclaimer: ‘do not try this at home’. ”

His goal? “I’m hoping we’ll get to a point where everyone realises that what you see on social media is not real.”

But many do think everything is real. Instagram is full of influencers using filters, photo editing apps like Facetune, and even taking steroids and having cosmetic surgery but not declaring they use any of these ‘aids’ in their posts.

“I think social media pushes a false narrative of what we really look like,” says social media manager Luanne D’Souza, better known to her 23,700 Instagram followers as @weeshasworld. “Even pores are airbrushed into oblivion, and this can have a negative impact on someone scrolling through their apps every day. Posting a reality check is a great reminder that pores, acne, cellulite and so much more are natural and normal.”

And despite being a social media expert and one of the UAE’s most proficient advocates of body confidence, D’Souza is not immune to the trappings of social media. “I scroll through Instagram and think ‘Wow, is everyone perfect?’ and it messes with my head sometimes. Imagine girls or women who aren’t exposed to the body positivity movement, this fake idea of perfection can lead to low self-esteem, depression and eating disorders.”

Although studies in the Middle East are still in their infancy, global research in the UK and US has found links between the use of social media and anxiety, depression, eating disorders and suicidal thoughts. Psychologist and director of Dubai-based BE Psychology, Reem Shaheen explains: “The development of any mental health illness is dependent on many different factors, including genetic predisposition and biological and environmental factors. That being said, social media, which conveys a picture of perfection, has contributed tremendously in the increase of the onset of these disorders. Social media is not necessarily the cause, but it is definitely a very powerful trigger.”

With 99 per cent of UAE residents being active users of social media and a recent study by the Canadian University in Dubai showing that UAE students are spending a staggering five or more hours a day on social media, shouldn’t more be done to make sure it’s a safe place to hang out? Last month, Instagram promised to restrict and remove certain weight loss products or cosmetic procedures that are linked to commercial offers, but D’Souza doesn’t think this goes far enough.

“It’s a toxic industry that feeds off insecurities and should be heavily regulated,” she says. “I think these posts need to be completely banned.”

Until then, the responsibility of spreading a positive message about physical appearance seems to reside with the influencers. But as the body positive movement gains traction, could there be negative aspects to this growing trend?

“I feel like some girls are using the trend as a way to grow [their following],”  says Dubai-based travel and wellness blogger Carly Neave. “They have quite incredible natural bodies, and it doesn’t help people feel better about themselves because these influencers manage to squeeze one bit of cellulite into a picture. It wears a little thin when you see sports and bikini models, who are not skinny but genuinely very strong, fit and healthy, tap into this ‘trend’.”

D’Souza agrees: “I feel like a lot of conventionally attractive influencers jumped on the bandwagon with good intentions but lack knowledge about the history behind the movement. How are you actively contributing and showing solidarity with the people who actually face serious discrimination based on their appearance and weight?” she asks. “It was started by women of color to end fatphobia, but sadly, it now mostly excludes them and has been reduced to a trend that just further contributes to the issues.”

Last month Neave shared another concern around this growing trend with her 43K Instagram followers:

“My personal fear comes from the impact on the younger generation, who might feel a little lost and then see talking about a trendy issue, that isn’t really there for them, as a way to get more friends and more followers.”

“I think the focus has shifted from being confident in your body and not having to live up to this ‘perfect’ shape, to saying that any, and all, body types, no matter how big or small, are okay,” says Neave, who is a qualified personal trainer. “I love curvy, I myself carry a fair few extra kgs, but I think we need to ensure that along with confidence, we are also promoting health and strength. That’s the dream combo in my eyes.”

Even with its controversies, body positivity seems to be making moves in the right direction.

“There is still a lot of work to do in the UAE,” says Esseibi. “But to be completely fair, we have curvy people modelling in newspapers and on TV, they’re talking about body positivity on the radio, we’re getting magazine covers, winning awards  and walking fashion shows…we’ve come a long way.”

Read next: Why parents need to stop body shaming their children

The best new books on wellbeing