Menu
Cycling, and in particular road cycling, is one of the fastest growing sports in the UAE, and riders are well and truly spoiled for choice when it comes to races over the next few cooler months. From climbing adventures in RAK to UCI qualifiers in Dubai, there’s something for anyone who loves life in the peloton. The season kicked off over the weekend with the Khorfakkan Clouds Challenge on October 30. This coastal town in Sharjah... 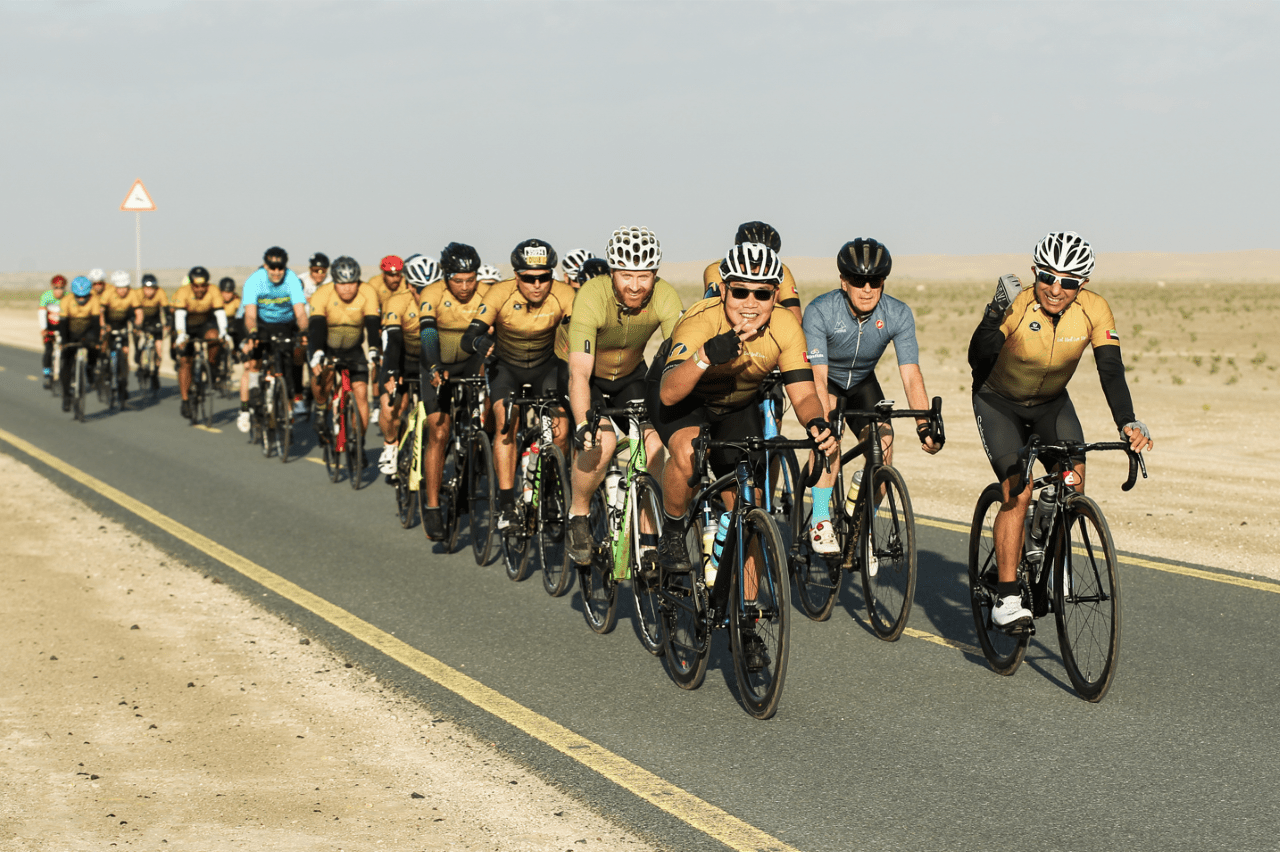 Cycling, and in particular road cycling, is one of the fastest growing sports in the UAE, and riders are well and truly spoiled for choice when it comes to races over the next few cooler months. From climbing adventures in RAK to UCI qualifiers in Dubai, there’s something for anyone who loves life in the peloton. The season kicked off over the weekend with the Khorfakkan Clouds Challenge on October 30. This coastal town in Sharjah recently opened the Al Suhub Rest House, a observation deck and restaurant at the top of a 6km mountain road. The road to it has a gruelling average gradient of 9 percent, so it’s no surprise it’s become popular with cycling’s grimpeur community in the UAE (that’s French for climbers). The Clouds Challenge is a time trial up a hill that delivers spectacular views of the UAE coast at the top. Now for the upcoming races:

Abu Dhabi’s Hudayriat Island hosts a 40km cycle ride for a good cause, raising funds for the UAE’s Operation Smile. There’s also a 10km race for kids on the day. The event is in collaboration with Abu Dhabi Cycling Club.

The nation’s capital was named a Bike City by the sport’s governing body the UCI last year, and November sees the first-ever Bike Abu Dhabi Festival. The highlight of the event is a Gran Fondo race – meaning a long distance and lots of competitors – from Abu Dhabi to Al Ain. The route is 150km long and there’s a Dh2 million prize pot up for grabs that is distributed among different age categories for male and female racers. While competitors are spared having to climb the garden city’s Jebel Hafeet at the end, it’ll still be a grueling day on the bike.

Looking for somewhere new to ride in the UAE? Next month sees the inaugural Expo City Dubai Ride. There’s four distances available (with 70km being the longest) and the route takes in the unique architecture of the Expo city and heads out towards Dubai South and close to Al Maktoum International Airport.

UAE events company Urban-Ultra’s November ride from Sharjah to Fujairah now takes place twice a year, with the November edition being a shorter version that covers 165km and goes through Khorfakkan on its way to the finish line. Get set for some stunning scenery to keep your mind off the pain, especially around the Al Rafisah Dam in Khorfakkan.

This race in one of the UAE’s smaller emirates has become a rider favorite over the years — in part because the authorities roll out the red carpet, with the local police doing their best to keep riders safe with road closures. Starting and finishing at Ajman’s picturesque Al Zorah there are two distances to pick from: 52km and 105km.

Why ride one emirate in a day, when you can ride all seven? The Twenty 4:7 is a 280km ride that covers all seven emirates. The ride organisers are quick to point out this is an endurance ride opposed to a race and it’s open to a maximum of only 30 riders. Just be wary of the price — compared to other rides, it’s a little pricey at Dh1,338.

February sees one of the UAE’s most iconic cycle races take place through the streets of Dubai, and the last build-up ride for the event takes place at the emirate’s cycle track Al Qudra. This ride is 85km, which should get you ready for the 92km main event a month later.

The main event on Dubai’s cycling calendar is so popular, racers enter from all over the globe — and with good reason. It’s now a UCI qualifier for the Gran Fondo World Series. Once again, the route covers 92km of Dubai roads and goes past JLT, Global Village and the Expo 2020 Dubai site, to name a few.

An event for those who are really after a challenge (or are just a bit nuts), Everesting involves finding a hill or mountain, and going up it enough times to match the elevation gain you’d get if you were to cycle up Mount Everest. The ride is organised by Hit The Road (who are also organizing The Twenty 4:7) and it takes place on Jebel Jais in RAK. The price of the package is as steep as the climb (Dh2,740), but it does include two build-up rides in December and January and full support on the day of the big event.

Kalba and Hatta are two of the best places in the UAE to ride a bike, and Urban-Ultra’s Kalba Hills Challenge is like an abridged Coast To Coast. No coastlines — but plenty of climbing, with about 700m of elevation gain up for grabs. The event starts and finishes at the pretty Kalba Lagoon.

Along with the Spinneys, the Coast To Coast is perhaps the most loved and iconic event on the UAE’s cycling calendar. It’s also one of the most gruelling. Covering 215km with an elevation gain of 1,300m, it’s not for the faint-hearted (or the unfit). The route starts in Sharjah and heads across the UAE down the E102, and through Showka and Kalba before heading up the coast to Fujairah. It’s another ride that isn’t a race: this one is all about the challenge of making it such a long way on the bike.

How “harm reduction” is a growing commodity in the Middle East