Menu
In the market for new trainers? You’ll likely test drive a few, evaluating them in terms of fit, form, feel and functionality with the most comfortable pair for the win. It’s no secret that styles boasting Air, Boost, Gel and Hovr usually sit atop bestseller lists and this is attributed to superior performance, supported by each brand’s proprietary technology. From cushioning to traction and beyond, we’re getting to the bottom of the specs on your... 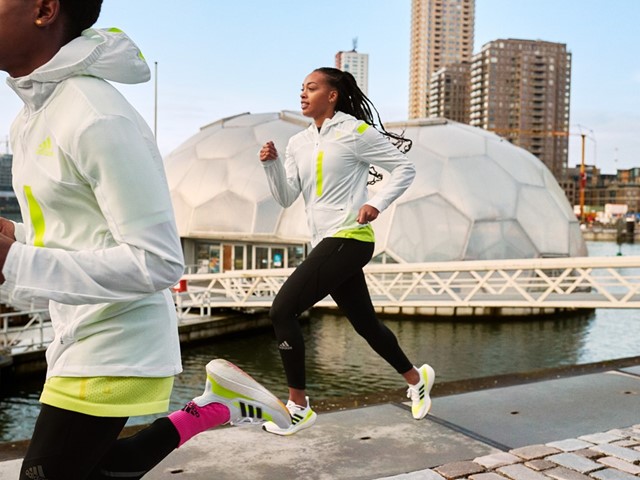 In the market for new trainers? You’ll likely test drive a few, evaluating them in terms of fit, form, feel and functionality with the most comfortable pair for the win. It’s no secret that styles boasting Air, Boost, Gel and Hovr usually sit atop bestseller lists and this is attributed to superior performance, supported by each brand’s proprietary technology. From cushioning to traction and beyond, we’re getting to the bottom of the specs on your favorite tech’d out trainers.

Nike broke the mold, introducing air as a cushioning method in the 1970s. After introducing the original air, Nike upgraded its air experience to Zoom Air in 1995, which includes a series of highly tensioned polyester or nylon fibers that snap the Zoom Air bag back into position after compression. Nike continues to innovate and push boundaries with developments such as the Nike ISPA (Improvise, Scavenge, Protect, Adapt), which focuses more on material innovation. Its modular construction method massively reduces production time without using a single drop of glue.

Adidas Boost technology, developed by the Adidas Innovation Team (AIT) and German chemists BASF, is known as expanded thermoplastic polyurethane—or eTPU, for short. To create Boost, thermoplastic polyurethane particles are expanded to form closed cells around tiny pockets of air. It was created to bring together the formerly contradictory benefits of soft and responsive cushioning. At the time, EVA foam was the industry standard for performance running shoes and Boost changed all that by introducing a midsole made from thousands of expanded particles that work together to deliver an uptick of energy return in every stride.

Boost was officially integrated into the Adidas running line in 2013. The benefits of Boost include comfort: the cushioning properties of Boost make it feel like you’re running on tiny, precision-engineered clouds. Boost is also engineered to cope with a wide range of temperatures, making it ideal for use in a variety of weather conditions. Adidas asserts that Boost technology is also durable and flexible. Perhaps its best quality is energy return — the power to absorb and return more of an athlete’s kinetic output is what helped the brand change the performance shoe industry forever.

ASICS’ GEL technology transformed running shoe design and performance when it launched in 1986. The shock absorption of the cushioning filled with GEL technology was a major advancement in the running shoe industry. From the beginning, ASICS has continued to develop cushioning technology to improve your performance on the move. GEL was created to deal with impacts, twists and stability. Different parts of your foot are subjected to different forces during a run. ASICS places specific formulations and configurations of GEL technologies in the places needed to handle these forces. Rearfoot GEL technology is for the heel and back of the foot, areas that face the most impact during a run. This technology supports a smooth transition as your foot rolls through a stride. Forefoot GEL technology uses a different technology from the toe-area of the foot to reduce shock during forward stride movements. Diversity Construction. ASICS also uses diversity construction to build products around complex biometrics. Not only does the company use multiple GEL technologies for different areas of the foot, designers include foam technologies for softness, cushioning and comfort.

Under Armour introduced Hovr, its signature running shoes technology, as a new way to construct foam cushioning in 2017. The Hovr midsole is made in partnership with Dow Chemical for a proprietary midsole foam compound that includes “super-soft durometer”. The aim of a combination of cushioning and shock absorption includes an “energy web” system and a mesh fabric that wraps the cushioning core. Under Armour’s latest sneaker styles – the UA HOVR Sonic and UA HOVR Phantom – been designed with a new pinnacle cushioning system that promises to deliver not only a cushioned ride but also energy return.

New Balance is gearing up for fresh drops at Sole DXB, Dubai’s lifestyle and streetwear festival, with a totally tech’d out release. The Made 990v6 features a timeless design and modern execution that offers a familiar look and feel for longtime 990 enthusiasts. It also combines premium suede, synthetic overlays, plus ENCAP and FuelCell midsole technologies, which allows greater responsiveness and improves running performance. New Balance has improved this material by adding more compression capacity to provide a responsive, soft and lightweight cushioning.

• For a more in depth look into sneaker technology, culture and streetwear, pop over to Sole DXB from December 9 to 11 for start studded entertainment and access to exclusive products. To mark its 10thb anniversary, Sole DXB is celebrating excellence across the Arab world by featuring regional musicians, designers, artists, speakers and athletes.