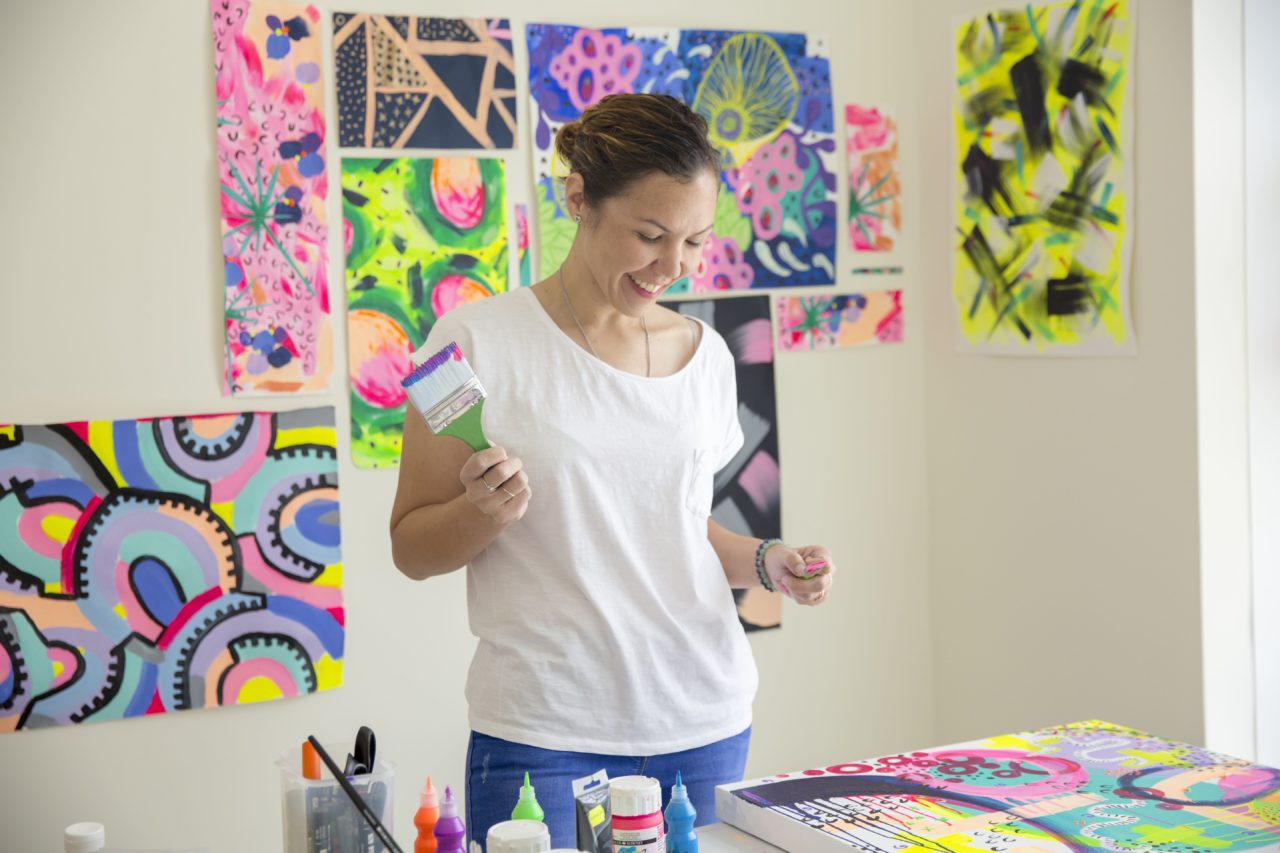 No matter what has been going on in her life, Suzie Curtis has always loved color. This was so even when the 37-year-old Australian graphic designer — who has struggled with bulimia, yo-yo dieting, anxiety and depression since she entered boarding school as a teenager — fell into a dark emotional hole when she moved to Abu Dhabi with her husband six years ago.

She wasn’t working, didn’t have a car and felt out of step with the friends she did have who were at different stages of their lives. It was the perfect storm: old emotional issues resurfaced and she started piling on weight. By the time she snapped out of it after meeting a plain-talking emergency room physician, she had gained 50 kilograms.

She’d arrived there, at the hospital, after her health reached a particular low one night at home.

“I thought, ‘I’m having a heart attack,’ because everything was out of control,” she says. “My heart was racing like crazy. I couldn’t breathe, I couldn’t do anything. I got taken to the hospital and that was the doctor basically saying, ‘You’ve got to change your life or you’re going to die’.”

The doctor was able to show her troubling blood-test results, including proof that she had a very fatty liver – stark numbers she couldn’t ignore.

“It took me probably about a month to really process it, but once I’d done that and I’d been to see different doctors then it really sank in for me,” she says. Curtis realized “I have to do this or otherwise I’m not going to be able to do things, like travel. I’ll have to get two seats on the airplane instead of one. Those were the things that kept me moving in the right direction.”

She started therapy and took medication to regulate her mood, consulting a dietitian to find a healthy way for her to eat. After much trial and error, “trying every diet under the sun”, Curtis settled on eating small meals six times per day.

“I still eat a burger or pizza or whatever,” she says. “I just don’t have it all in one sitting. So a burger would go over two meals, maybe three.”

Two colleagues at work helped with movement: one walking, the other introducing her to spinning – which Curtis took to right away, albeit gently.

And that’s where Kymoo Sport, the body positive activewear line she founded in late 2017, was really born. Curtis had been selling purses at local markets when someone suggested she do activewear. She had already been dissatisfied with the selection of plus-sized wear while she was bigger, and seized on the idea of offering a broad range of colorful clothing, including those on the plus-size upper end that are ignored by many brands.

“I am someone who always wears color,” she says. “Even at my heaviest I always had some color.” Yet when she started working out, the only things she could find to work out in her size were black: “Black tights, black tops. People want you to hide away because you are a fat person.”

Soon Curtis was making colorful workout wear — patterned after the paintings she produces — for family and friends, before finding a factory that could produce her pieces on a larger scale, turning her designs into workout tights, sports bras and more recently, tanks and soon, running shorts. She produced the clothes in sizes ranging from small to XL and 2XL; the latter two being her best sellers.

Her pieces are reasonably priced and unlike other clothing lines, Curtis doesn’t charge more for plus-sized pieces.

“For me it’s about giving back and and giving some comfort or adding color to their lives,” she says. “I mean, ideally I’d like to have a million-dollar business, but that’s not how I set out.”

Curtis has sold more than 1,000 pairs of leggings since launching. Although the majority of her customers are from Australia and the US, she sells worldwide online and through Instagram. She’s just picked up two new international retailers to sell her clothes — one in Belgium and one in Australia — and is in discussions with a company in Kuwait. Locally Kymoo Sport is available at The Room in Zayed Sports City and The Studio, a yoga and pilates studio on Abu Dhabi’s Corniche.

As she found her ideal size over the last three years, Curtis went from slow cycling to spinning enthusiast, last year completing a four-hour marathon at The Room, her gym of choice.

Last fall, on her 37th birthday, she got her spinning instructor certification, and would like to  launch a line of cycling gear — and someday, become an instructor.

She was featured in the body positive issue of Women’s Health magazine in September, while Kymoo Sport was nominated for the magazine’s boutique brands award, as well as a Pride of Abu Dhabi award several months later.

Curtis is determined to be as open and honest as possible about her continuing bouts of anxiety and depression, as well as the lasting changes that happen to a body that has been through so much.

“When you go from being morbidly obese to a healthy weight range, your body doesn’t necessarily snap back into shape,” she told Women’s Health. “I have to accept it. But you know what? That’s perfectly OK.”

Aside from being marketable, painting has been one of the ways Curtis has soothed her soul in some of her darkest times.

“For me it was finding something I knew I loved doing and that was my painting,” she says. “So on my bad days I would pull out my paints and try and paint my emotions. And there would be days where it would be one black line. But it was part of my process to try and get out of that.”

Curtis also believes that she had to go to the darkest of places to be able to find her way to the joy she has for life now.

“To be honest, I’m kind of glad that it happened,” she says. “Otherwise I wouldn’t be as happy as I am now.”

Now that Curtis has found her happy place – most of the time, anyway – she is determined to do whatever it takes to help others get to theirs.

“I think for me my purpose is to start motivating,” she says.  “Whether that’s me just listening to someone or me being a spinning instructor or me just putting color into clothing.”

Should boys play with dolls?

I spent a week in Italy at an Enlightenment Intensive