Menu
People in the UAE like meat. But amid the region’s Arabic grill-loving, Aussie barbecuing, meat-sweat-brunch feasting culture is a growing movement toward all things vegan and vegetarian. Enter Beyond Meat. This US-based company has absolutely sizzled to stardom with its signature “bleeding” burger. With a flavor profile and texture similar to real meat, the Beyond Burger blows away limp, sad veggie patties of the past, all while maintaining a protein and calorie profile similar to actual... 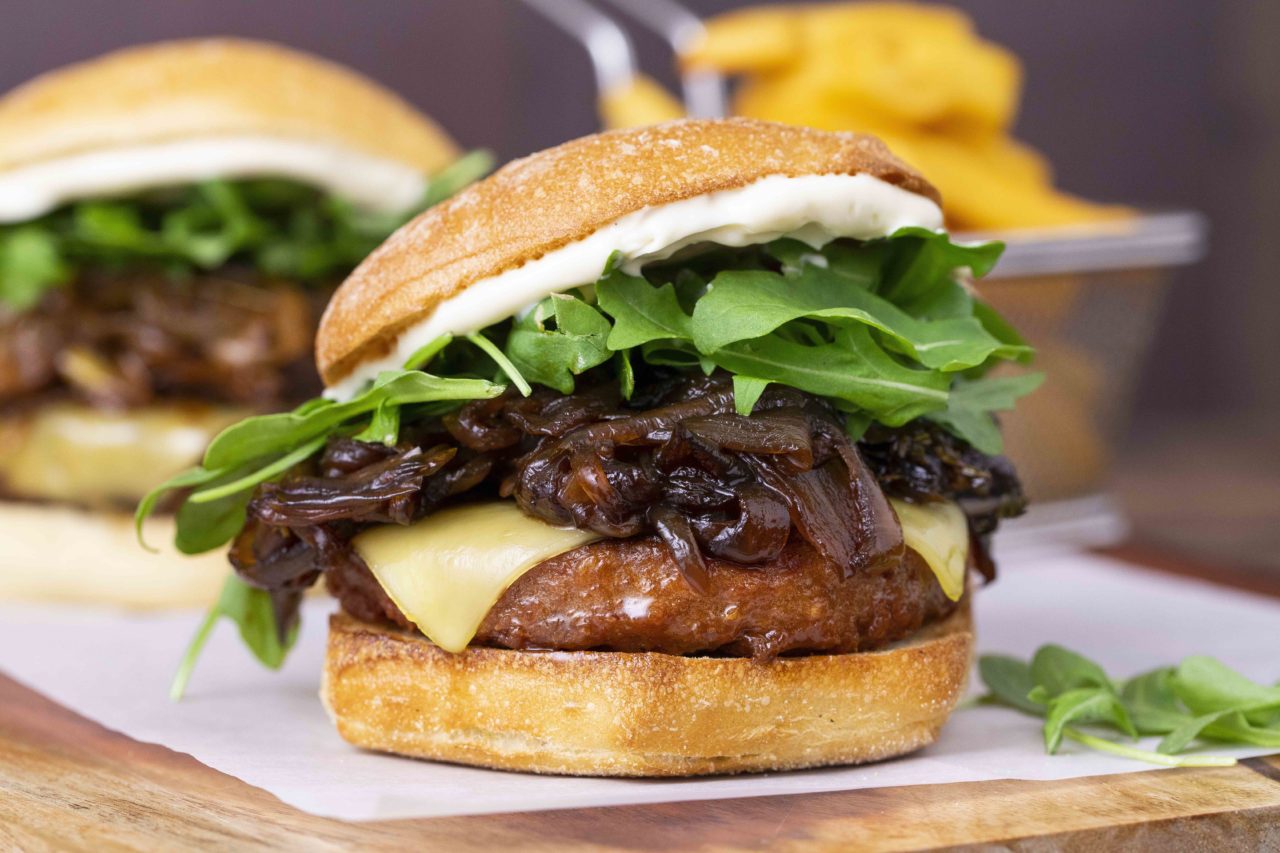 People in the UAE like meat. But amid the region’s Arabic grill-loving, Aussie barbecuing, meat-sweat-brunch feasting culture is a growing movement toward all things vegan and vegetarian. Enter Beyond Meat. This US-based company has absolutely sizzled to stardom with its signature “bleeding” burger. With a flavor profile and texture similar to real meat, the Beyond Burger blows away limp, sad veggie patties of the past, all while maintaining a protein and calorie profile similar to actual meat.

The company was founded in 2009 and has been making plant-based burger patties since 2016. Their meatier Beyond Burger first landed in the UAE two years later in 2018 but now they’re popping up in the UAE on pizzas, in restaurants and at certain grocery stores, including Spinneys, through delivery at outlets like Freedom Pizza and Flexi Kitchen, through Bareburger and in some Jumeirah Group hotels.

“Consumers are pulling away from red and processed meats because of the associated health and environmental concerns,” said Ihab Leheta, Beyond Meat’s director of international sales, explaining the brand’s growth in the UAE.

“If we can deliver everything consumers know and love about meat – its delicious taste, high levels of culinary versatility, etc – but without the downsides, it becomes a very appealing proposition to meat eaters and vegans alike.”

Going beyond meat in the region

“It has all the juicy, mouth-watering taste of a traditional burger, with all the upsides of plant-based protein,” she notes. Consider how the burger is low in saturated fats, has no peanuts or tree nuts, and is completely animal-fat free, she added.

“The result is an uncompromisingly delicious burger, made directly from plants.”

Similarly, the already loved-by-vegans Freedom Pizza has just rolled out its Beyond Pizza. This entirely plant-based option comes topped with Beyond Meat, vegan cheese, sun-dried tomatoes, beetroot and caramelized onions.

“Seeking plant-based alternatives is no longer a trend followed by hippies in Los Angeles,” Ian Ohan, owner and CEO of Freedom Pizza, told TimeOut. “This is a lifestyle choice for many people now and it’s here to stay.”

Within the region, Beyond Meat hasn’t adjusted or shifted anything for the local market (but we do wonder if a faux camel will be popping up anytime soon) but does offer a recipe for Middle Eastern-type skewers on its website. Just swap the Beyond Burgers for Beyond Beef, which doesn’t retail here – yet. For poultry lovers, the brand’s “chicken meat” is currently trialing in Atlanta on a limited basis. If it works, says Leheta, then maybe white meat is next.

While Beyond Meat might be the best known of the plant burger brands, other meatier, changing-the-game options are popping up around town. Moving Mountains, a vegan burger company that even has a sunflower-seed hotdog, is available at  Hard Rock Cafe and Nikki Beach in Dubai and at Applebee’s in both Dubai and Abu Dhabi. You can also order Moving Mountains’ well-reviewed plant-based burgers via Jomo, where the animal-friendly meat comes with a side of quirky packaging.

As Flexi Kitchen’s Sarwat explains, there are a number of reasons to think about swapping out at least some of the meat you eat every week.

“Choosing and shifting from animal to plant-based protein can have a significant, positive impact in the areas of human health, climate change, sustainability, and animal welfare,” she says.

This notion that plant-based meat is better for us than the real thing is debatable. Earlier this month, the Center for Organizational Research and Education (formerly the Center for Consumer Freedom, a lobby group that works on behalf of a number of industries, including fast food and meat) took out full-page ads in the New York Post and Wall Street Journal.  Under the banner Fake Meat, Real Chemicals, the ads listed all the additives used in plant-based burgers concluding with the statement: “So-called plant-based meats don’t grow on a vine, they ‘grow’ in factories.”

Yet when Business Insider hired four nutritionists to independently review the Beyond Meat burger, all agreed that it was a healthier option than more traditional meat even with its admittedly longer ingredient list. They recommended people think of the alternative as a “sometimes food ” – that is, something for special occasions or as a treat, but still probably not quite as good for you as a pile of kale or a veggie soup.

When asked about the controversy, Beyond’s Leheta said: “We believe it is a tale of two processes.”

On one hand, there’s the process of raising animals involved in regular meat production. The plant-based alternative involves separating the pea, mung bean and rice protein from its fiber through a water-based method, then running the protein through heating, cooling, and pressure processes to create a meat-like structure.

The process, explained Leheta, is similar to making pasta. The product is assembled to replicate the look and feel of actual meat, right down to its slight color change as it cooks.

“Ultimately, it is up to the consumer which they are more comfortable with,” Lehata said. The Beyond Burger, she added, is “far more humane and sustainable than traditional livestock production. We only use simple, plant-based ingredients.”

But how do you cook Beyond Meat?

“I lift weights and Beyond Meat is high in protein and easy to flavor,” she notes.

“If you’re cooking Beyond Meat at home, make sure you flavor it. Even the burger, you can crumble and use as taco fillers,” she says. With the faux chicken (if you manage to get hold fit), she recommends chopping it up for fajitas or dicing it to throw into pasta.

“I became vegan for ethical reasons, so I can never go back to eating meat,” she said. “Even if I crave some of the products, vegan meat substitutes offer the flavor and texture without killing innocent creatures.”

'I’m human': A Dubai trainer opens up about her struggles with binge eating

What the GCC taught me about minimalism