Menu
The Beyond Burger wasn’t designed to be a diet food, or to be less calorie or fat-laden than real beef. 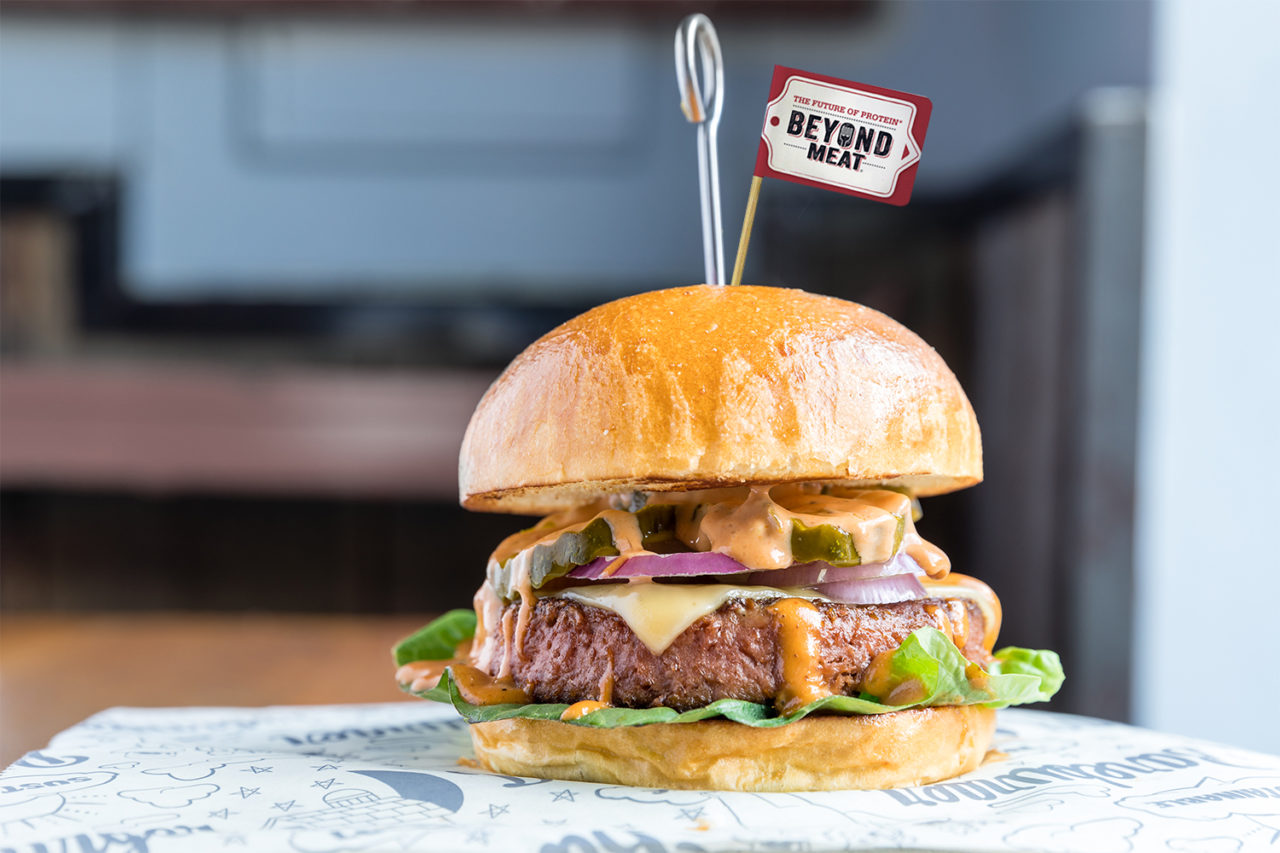 The Beyond Meat Burger, a much-raved about, plant-based patty created in the United States, is making its debut in the UAE in September.

Earlier this summer, livehealthy.ae got a sneak peek at this lettuce-wrapped offering (and more than a few sneak bites, we confess), which will be available at the UAE’s three Bareburger outlets. Not only does Beyond Burger taste and smell like meat, it looks and feels like it too.

Although you can have the burger on a brioche bun, ours came wrapped in greens, topped with a slice of orange vegan cheese, stuffed with alfalfa sprouts and smothered with a zesty special sauce.

“Wow, that really does look like a burger,” said a meat-loving dinner companion when it arrived.

The patty, which contains pea protein isolate and refined coconut oil, sizzles like real meat on the grill and bears a beef-like weight. The oils mimic the juices in a meat patty. Anyone who’s tried the various substitutes out there – vegan patties have been made with everything from quinoa to soy – knows that more times than not, they are far too dry. The Beyond Burger is incredibly juicy. It tastes like meat. And the finishing touch? Beets, which add a realistic medium-rare hue.

The patty is a celebrity favorite in the US; The Good Place actress, vegetarian Kristen Bell, recently posted an Instagram story about a superfood bowl she made with one.

“For protein, I’m obsessed with the Beyond Burger,” she told the Los Angeles Times. “When I’m working out, I’ll eat two a day.”

The film actress Scarlett Johansson and the singer Lorde are also said to be fans.

The Beyond Burger wasn’t designed to be a diet food, or to be less calorie- or fat-laden than real beef. “Our goal in creating The Beyond Burger was to provide the full 360-degree, mouth-watering, juicy, and delicious experience of beef, but without so many of the health, environmental and animal welfare downsides of traditional animal-based meat,” says Bareburger’s website.

The Beyond Burger was instead built with nutrient density in mind. The company worked out the recipe in partnership with a triathlete named Brendan Brazier.

There’s no soy or gluten in The Beyond Burger, which is antibiotic-, hormone- and GMO-free. The ingredient list isn’t long, but it is surprisingly short on actual vegetables – as in, other than pea protein, there really isn’t any. As for how it stacks up to a regular patty, there are 20 grams of plant-based protein, one more than in beef. The Beyond Burger’s fat and calorie content isn’t that different from beef either: 290 calories (beef is 287 for a similar serving size) with 22 grams of fat, five of those saturated (beef is 23 grams of fat, 9 of it saturated). It has 25 per cent of our daily recommended intake of iron, almost double real beef, as well as good-for-you vitamins and minerals, like phosphorus and vitamin C.

Burger chains have been waking up to the rising numbers of people switching to complete or partial plant-based diets, whether for health reasons or because of the toll that raising cattle has on the environment. (People for the Ethical Treatment of Animals reports that it takes 1,847 gallons (6,990 liters) of water to produce one pound of beef, not to mention the resulting greenhouse gas emissions and raw materials required.)

While some efforts are focused on growing meat in a lab, other companies, just like Beyond Burger, have focused on innovative plant-based alternatives. In downtown Vancouver, Canada, the A&W chain reports that its Beyond Meat burger has been outselling the Teen Burger. And Impossible Foods’ patties, made with wheat and potato protein, are being trialled this summer at theme parks and baseball stadiums in California.

Earlier this year Beyond Burger replaced elk and boar burgers at all 38 Bareburger outlets in the United States. The product is also sold in supermarkets and at all TGI Fridays.

In the UAE, The Beyond Burger will be available at Bareburger’s three outlets at Marina Mall in Abu Dhabi; and City Walk, Festival City and beachfront at La Mer in Dubai.

Why children should eat the same healthy food as their parents

Here are 3 free, fast and easy ways to getting zen in the UAE