Menu
The AD Movement was launched in 2016 to empower women in Abu Dhabi as they pursue holistic fitness and wellness journey.  Now after a Covid-19-length break, in a dramatically different fitness landscape, they are back, with plans to offer health and wellness events that promote inclusivity, self-love, positivity, and empowerment for Emiratis and expats. The first will be October 30 at The Bridge Lifestyle Hub in Al Qana. Co-founders Abeer Amiri and Sarah Al Nowais tell... 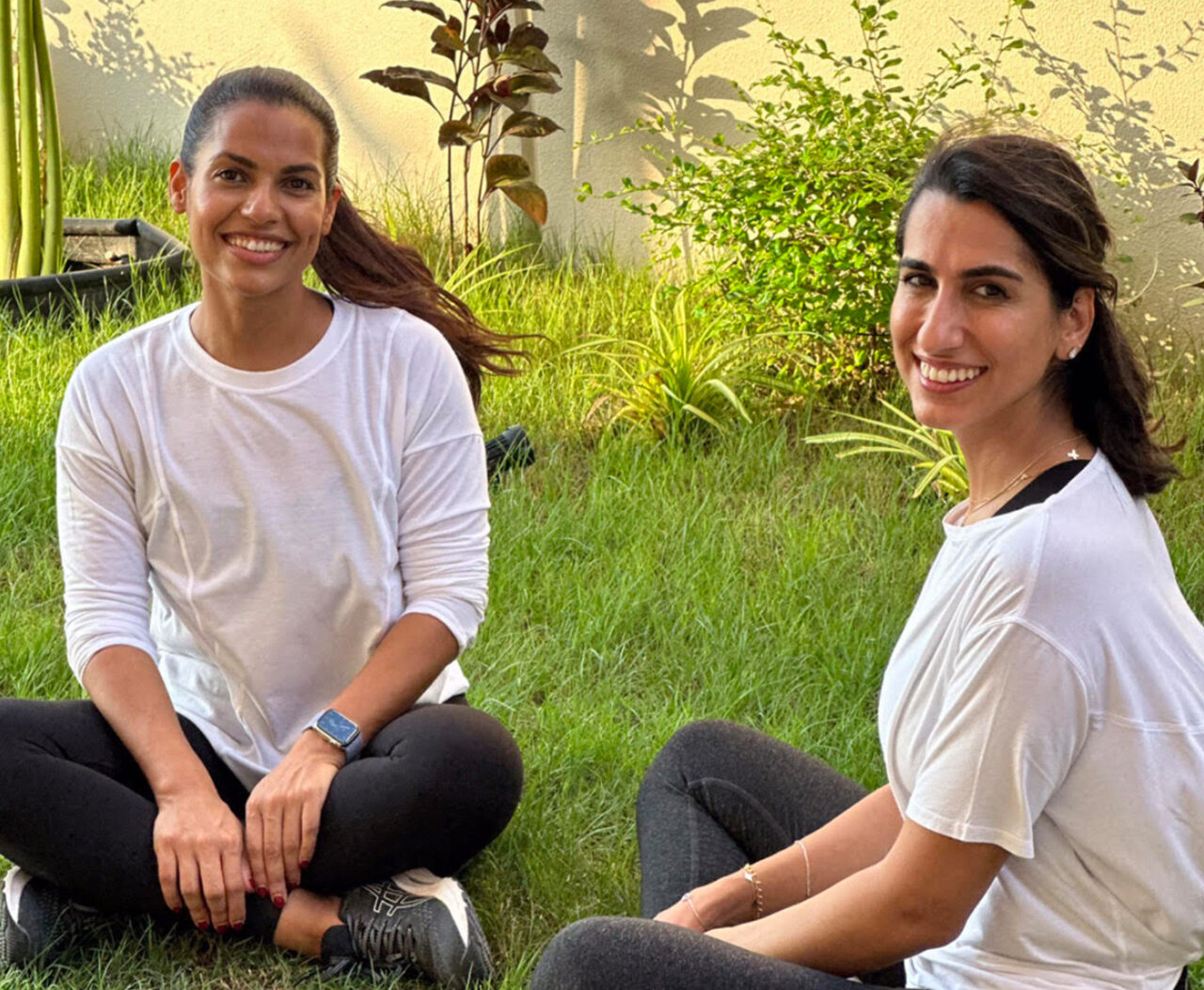 The AD Movement was launched in 2016 to empower women in Abu Dhabi as they pursue holistic fitness and wellness journey.

Now after a Covid-19-length break, in a dramatically different fitness landscape, they are back, with plans to offer health and wellness events that promote inclusivity, self-love, positivity, and empowerment for Emiratis and expats. The first will be October 30 at The Bridge Lifestyle Hub in Al Qana.

Co-founders Abeer Amiri and Sarah Al Nowais tell The Livehealthy Podcast what’s been happening and what they have in store.

When you started this AD Movement, it was quite unusual. Back in 2016 in Abu Dhabi there still wasn’t that much going on, compared to Dubai. How do you see the landscape now?

Sarah: You’re absolutely right. We were having this conversation the other day with Abeer because in 2016/2017, when we would launch an event, these would sell out so fast because there wasn’t much happening at the time. This was like the fitness event for women, or the social gathering around health and wellness happening. But right now in one single weekend, there is so much happening. Not even in Dubai, in Abu Dhabi. That’s fantastic.

Abeer: When we started, it was literally because we were looking for something like this, and there was just nowhere we could go to know what’s happening in Abu Dhabi when it comes to the health and wellness scene. There was so much information just being thrown at you, but you couldn’t navigate unless you are an expert and you understand what’s being thrown your way. It literally started out of both a need and a desire to see something like this in Abu Dhabi.

Sarah: I think in Abu Dhabi, it’s still the case in the sense that all these new places are opening up and there’s such fantastic facilities and places, and it’s the same situation as in 2016 where we realized there was so much on offer, but people didn’t know about it or they were a little intimidated to go. Our purpose was to promote and introduce in a more inviting way. Come over, have fun, let us introduce you to the trainers, the coaches, and it’s just going to be us, a few people, just the women.

It works because people come and they have a good time and not only do they meet the trainers and they get introduced to the facilities, but they also meet other women who they can come back with. That’s happened a few times. We’ve gotten really positive feedback where people come in, they meet a couple of other women that they click with, and they come back for classes together.

How has your fitness philosophy changed or evolved since you launched in 2016?

Abeer: Mine personally has drastically shifted. My fitness journey only started in 2014 just because I wanted to just get out of the work routine of long hours and sitting behind the desk, to be honest. I was introduced to Crossfit-style workouts and I fell in love with weightlifting. I just kept going back to it and decided to get educated in it. I got certified as a level two CrossFit coach and I really stuck in that zone. After doing the AD movement, and the whole concept of the AD movement is introducing women to different ways of living healthy. There isn’t just one way. Through our events, I was being introduced to so many different things. I remember specifically, we had an event in 2017 at the Bodytree Studio.

These were one of our smaller, more intimate events where we did yin yoga. Prior to that, I had never done yoga in a class because I was so intimidated. All I was doing at that point was weightlifting. My muscles were really tight. I was not flexible, I was not doing any mobility exercises but with that event and the amazing teacher that we had, I fell in love. I still remember in her class she would say, ‘You don’t have to be perfect’. I’m like, ‘I can do not perfect’. Ever since, I’ve been incorporating flows and movements into every day, even if it’s just five minutes before I go to work or just in the middle of the day if I’m home and I feel I’ve been sitting in front of the TV for a while.

I’ve come to learn to love other ways of being healthy. Then also of course comes that sense of community. I think initially I was really in the fitness scene because it was a social activity. CrossFit is also all about community, but then I realized the community goes beyond your class and you make friends. I’ve had beautiful friendships that have come up from our events, from our running groups. You learn to be a lover of everything healthy.

Sarah: Abeer had started a few years ago, a running group which we restarted together in Saadiyat area back in January. Through this running group I met a couple of women who I clicked with and with each other’s support, we kept our runs consistent, but even more than that, we pushed each other to try new things.Something I’ve always wanted to try but feared was open-water swimming. I love swimming. I grew up swimming in school, et cetera, but it was something I was really scared to do. One day I saw this post about Team Swim, a relay, and I thought, ‘Okay, if I am to do this and I really want to, I need to find people to do it with me’. These women instantly were like, ‘Yes. I’m doing it’. We did and it was so freeing, but I wouldn’t have done it alone. The other day we signed up for a triathlon, something I never thought I would do.

Abeer, you have a social media account, Girls Just Wanna Clean. Was it a bit ahead of the curve for an Emirati woman then?

Abeer: I actually started it because I was looking for women. I was training at a gym and I realized everyone that’s there comes from thick background. They were doing sports in school. They were from all parts of the world, but I couldn’t find any younger girls at the time, younger women that I could connect with and were on this journey with me. I was really new to it and I was scared of doing it alone. I was looking and looking and I couldn’t find anyone. I thought, I’m just going to put myself out there and maybe the women will come, and they did.

They came and I think from there, both Sarah and I discovered each other. We used to work together in our previous jobs and we just clicked. I really think once you put yourself out there and you know what you’re looking for, it comes to you.

What’s your advice for someone who may have stopped moving, or never started moving and knows that they should be moving, but it seems like such a big job?

Sarah: It’s very difficult for someone who has stopped for a while and wants to restart and we see it all the time. We talk a lot about fitness and coming to our events and meeting like-minded people, et cetera. Actually, the AD movement isn’t just about bringing together what I’ll call fitness freaks or people who are interested in fitness. It is making it accessible and attractive to people who maybe are on the fence and are intimidated or don’t know where to start. They come, they try something new, we offer beginner-level classes for everyone.

Things that are accessible and again maybe when they see people, and they see the energy, or they feel the energy, they meet the trainers, they meet other women who are in the same situation. For us hopefully, this is something that will go forward. We’ve seen it even in our running group. We’ve had complete beginners who are even scared. They say they’ll come week after week, but they don’t show up and then finally they’re like, ‘Okay, we’ll show up’. Then they love it. They feel great because they’ve moved their bodies. It’s not just a physical thing, right? It’s also mental health. When you move, you feel amazing, but when you move with people, it’s an added joy and positivity. This is how we can help or how we would like to help.

Abeer: I think also it’s really important to find something you enjoy. When I was trying to be fit back in my college days, I literally went to the gym two times and I decided, this is not for me. I cannot go to a gym or be on a treadmill and do any machines. I came across CrossFit and I found out that I really enjoyed it. Because it was fun, I was going back to it more. I was going back more. I was seeing more results and it starts getting addictive. You just find yourself suddenly in this healthy habit without really being something that you have to do.

Sarah would say, ‘I hear the wind. It’s really windy. I don’t know if I want to go. I’m really sleepy.’ But we go and we have such a great time that come next week, we’re back at it again.

Check out The AD Movement x The Bridge Lifestyle Hub event on October 30 starting at 9am. There is a fitness session (choose between spinning, circuit training or duathlon), sound healing, nutrition talk on glucose and hormone balancing and lunch.

Why HRT is safer than ever for treating menopause symptoms