Menu
In July, long-time Dubai resident Nick Watson will take on the Challenge Roth Ironman in Germany. Any Ironman race is gruelling but for the 50-year-old, extra exertion is required because he will be swimming, cycling and running around the triathlon course with his 16-year-old son, Rio.  Nick and Rio – known collectively as Team Angel Wolf – have become familiar faces on the UAE triathlon circuit in recent years, having competed together in more than... 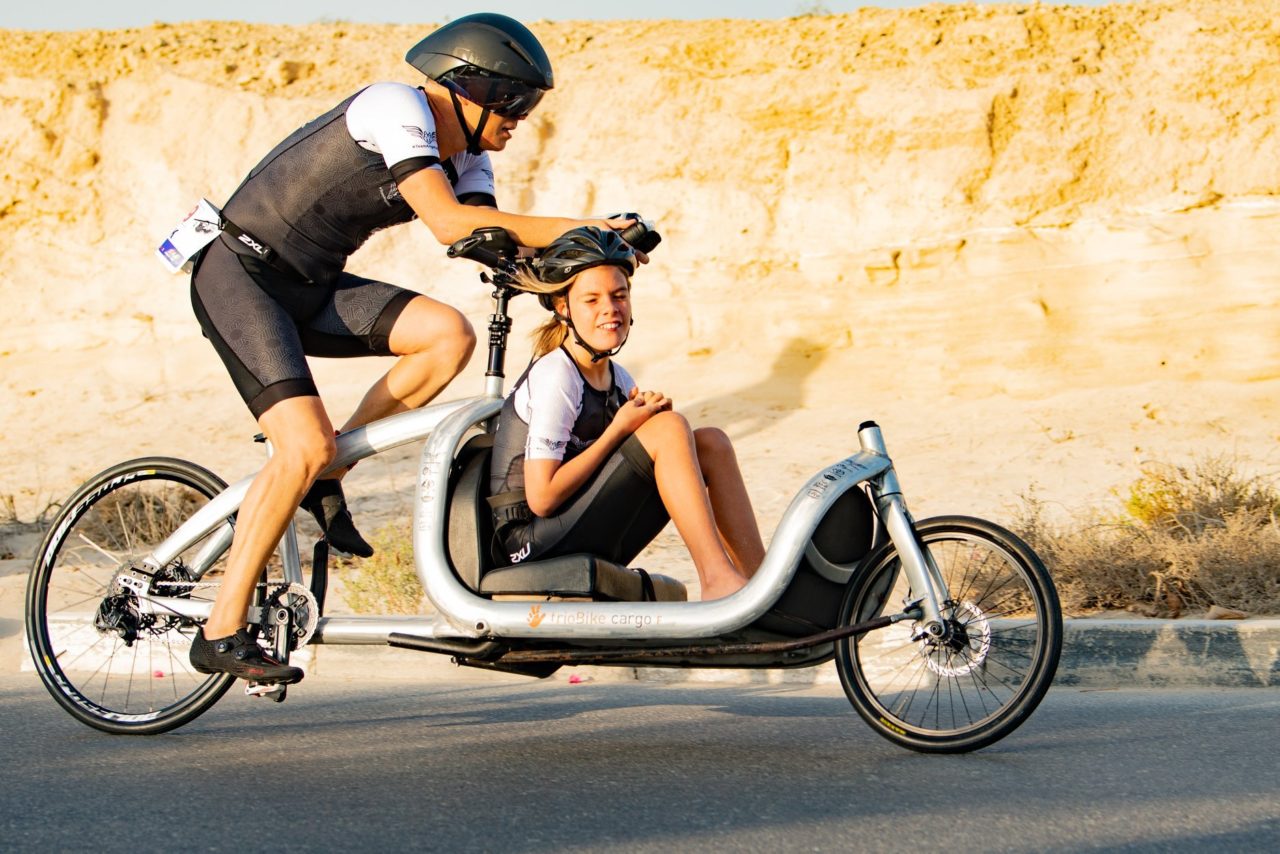 In July, long-time Dubai resident Nick Watson will take on the Challenge Roth Ironman in Germany. Any Ironman race is gruelling but for the 50-year-old, extra exertion is required because he will be swimming, cycling and running around the triathlon course with his 16-year-old son, Rio.

Nick and Rio – known collectively as Team Angel Wolf – have become familiar faces on the UAE triathlon circuit in recent years, having competed together in more than 200 events, including the ITU World Triathlon in Dubai, which was to be on March 6 but has been delayed due to coronavirus.

Rio has a rare chromosome disorder, 1q44 deletion syndrome, which affects his speech and motor skills. He and his father have been showing the UAE since 2014 that disability does not need to be a barrier to participation.

“Sport breaks down boundaries,” Nick tells livehealthy.ae. “It doesn’t matter about your nationality, culture, disability – the aim is the same, to get from a start line to a finish line. Sport is a great arena for spreading awareness and first and foremost we are trying to make sure people of determination are integrated into the community. We also want to inspire people to get fit and healthy.”

To get through the triathlon, Nick swims pulling Rio behind him on a kayak, cycles with Rio sitting at the front of his bike and runs pushing Rio in a specially made running chair.

“It is physically difficult of course, but it is always worth it to see Rio so happy,” says Nick. “He’s covered more than 6,300 kilometers of swimming, biking and running and 17 half-Ironmans. Then last November we got two Guinness World Records for swimming 5km and 10km in open water.

“Triathlon is really great for him because each discipline has a different sensory effect. When he’s in the water and there is splashing around him, he is laughing and singing, then on the bike he sits in front of me, which is lovely as we can interact – he really loves the speed!”

Team Angel Wolf has now developed from a two-man operation into a thriving non-profit with many supporters and team-mates. At events in the UAE, there are regularly large groups wearing Team Angel Wolf gear to help promote the cause.

“When people see us race, they are often intrigued about what we are doing so even if they don’t talk to us on the day, they will Google us and send messages on social media. This is exactly what we want, to have conversations with people about disability.

“Our ‘Together We Can’ programme welcomes people to come and try out our five running chairs and floating wheelchairs. They have to get hands-on – to help a child out of a wheelchair and into a running chair, for example – and then do the activity with them.

“Participating together is the best type of inclusion and the key is to get the community to join us. We want more families who have children with disabilities to think ‘Wow, if these guys can do it, then we can too’.”

Having lived in the UAE for two decades, Nick has noticed a significant shift in attitudes toward people with determination in recent years and hopes that Team Angel Wolf has played its part.

“Many things have happened in the past few years to make a difference. The Special Olympics was a historic event not just for Abu Dhabi but for the region, as it really highlighted what inclusion can look like. We can now see people with disabilities being integrated in sport, in schools, in the workplace.

“There is a great shift happening and though there will always be more to be done, it is clear the UAE grasps that. When this country does things, it does it well and at full speed and there is a huge shift towards awareness and inclusion. Of course we have tried to be a part of that and will continue to push people to change their perceptions.”

With the UAE’s hearts and minds conquered, the Challenge Roth Ironman in July is Team Angel Wolf’s first major international foray. In 2021, Nick is hoping that he and Rio will have an even bigger platform. They are aiming for a spot at the much-revered Ironman World Championship in Kona, Hawaii.

“We are so proud of what we’ve done in the UAE but now we want to get the message out to the larger community. Roth will be our first full Ironman distance with Rio and then the ultimate aim is Kona. It would mean so much and represent so many if we could compete there and take our story further afield.”

Chickpeas are the new eggs: Where to find a vegan omelette