Menu
The idea of sinking down to the depths of the ocean with no access to oxygen tanks and a single rope for company probably sounds like the stuff of nightmares to many people. But for freedivers, this type of descent represents an intoxicating blend of physical endurance and mental tranquillity.  Also known by its scientific name ‘apnea’, freediving has been a pastime of humans for as long as there has been an interest in what... 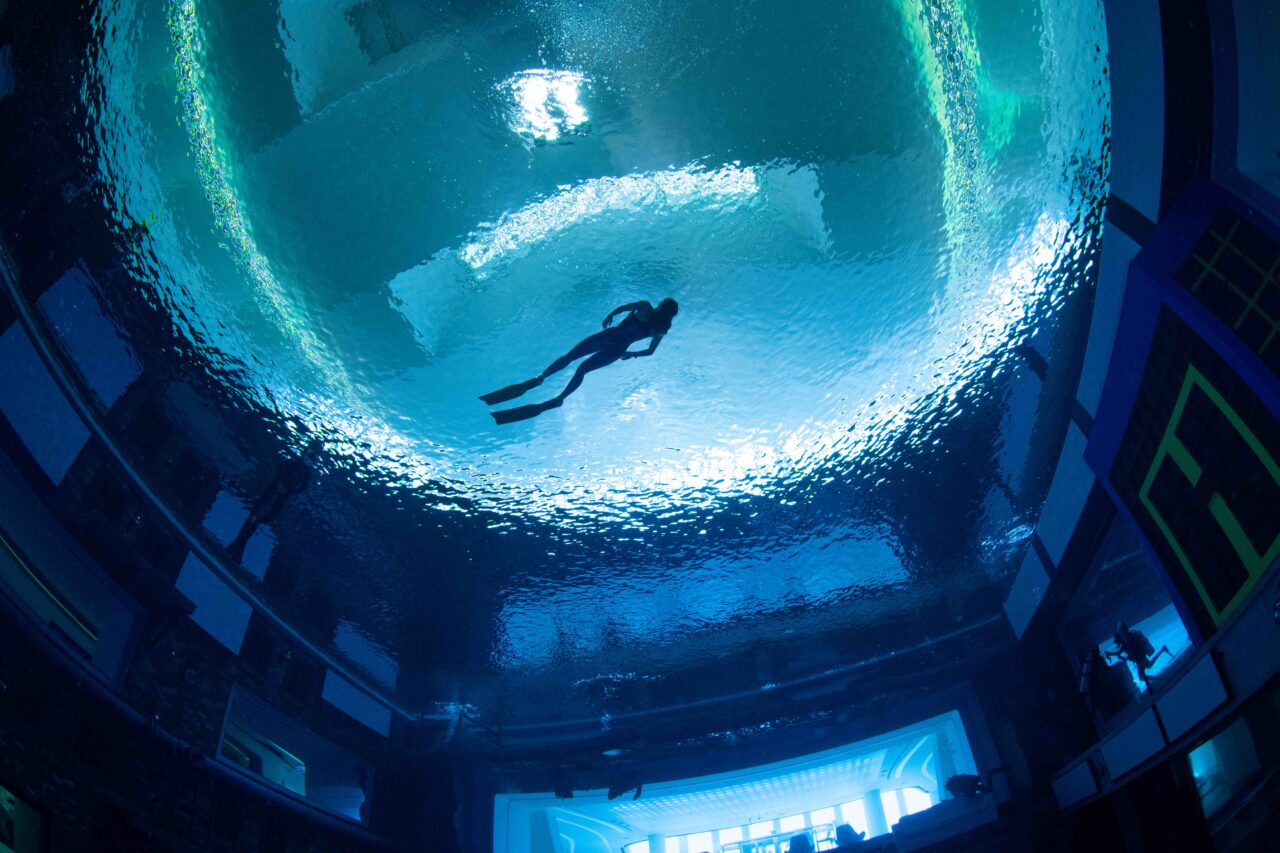 The idea of sinking down to the depths of the ocean with no access to oxygen tanks and a single rope for company probably sounds like the stuff of nightmares to many people. But for freedivers, this type of descent represents an intoxicating blend of physical endurance and mental tranquillity.

Also known by its scientific name ‘apnea’, freediving has been a pastime of humans for as long as there has been an interest in what lies beneath the waves. Its growth in popularity in recent years has been helped by high-profile Netflix documentaries like My Octopus Teacher, Hold Your Breath: The Ice Dive and Home Game.

Competitive freediving is an extreme sport, of that there can be no debate; the records that have been set and the levels of physical mastery demonstrated are staggering. In 2021, Croatian Budimir Šobat – who only began freediving six years earlier – broke the record for holding his breath underwater, describing how he had to “fight the time” to set a remarkable total of 24 minutes 37.36. And just last month, French freediver Arnaud Jerald broke the world record for deepest dive with bi-fins as he descended to a depth of 120m (393ft) in 3 minutes and 34 seconds.

But while these feats are superhuman and certainly extreme, the focus is not on adrenaline – quite the opposite. Freediving is about reaching a kind of nautical nirvana in which participants find and feel the equilibrium between their physical and mental self.

“You really feel as though you are flying,” says Yuriy Rakhmatullin, owner of Freediving UAE and founding member of the emirates’ nascent freediving community. “It is an amazing sensation. You learn to listen to your body and its many nuances. It requires caution and care as it’s just you and your body.

“There are so many benefits. Freediving is all about relaxation. The more frequently we practise relaxation techniques, the easier it is to stay for longer underwater. Meditation and freediving are interchangeable – when you are below the surface, you enter this meditative state. You have silence and no gravity so you can really close your eyes and reflect.”

Rakhmatullin was born in the Ukrainian coastal city of Mariupol and moved to Dubai at the age of eight, continuing to spend all his spare time in the sea. After experimenting with many different watersports and becoming a regular weekend scuba diver, he watched the iconic 1988 French freediving film The Big Blue. It was transformative.

“I knew at that moment that this was what I was supposed to do,” he recalls. “I’d always been in my element in the water and I enjoyed scuba diving but it felt as though something was missing. Remember that this is basic human nature – we all start freediving when we are infants in our mother’s womb. Freediving helps us connect with who we are.”

In 2013, Rakhmatullin became an official International Association for the Development of Apnea (AIDA) instructor and set about building up interest in freediving in the UAE. He stresses that the sport is not just about competition and breaking records, with many people also participating recreationally.

“Freediving is a very diverse activity and actually the most obvious part is just slightly deeper snorkelling; enjoying the fish and exploring the underwater world in a more natural way than in scuba diving –without producing bubbles or noise. We are designed by nature to hold our breath underwater, rather than breathing underwater.”

Moving from scuba diving to freediving is often a natural pathway into the sport but there exists an interesting culture clash, in which freedivers feel a sense of philosophical superiority as purists who experience the ocean in the most authentic way possible, like those who summit the world’s great mountains without using oxygen.

“Of course I have nothing against scuba divers,” Rakhmatullin says. “But I think legendary champion freediver Umberto Pelizzari summed it up best. He said, ‘When you scuba dive you look around yourself. When you freedive, you look inside yourself.’”

More and more people have been convinced to give freediving a go and Freediving UAE now takes boats of 15 to 20 people out every weekend, as well as hosting regular training sessions in the world’s deepest underwater pool at Deep Dive Dubai.

Nataliia Zharkova, one of Deep Dive Dubai’s instructors and the Ukrainian champion freediver, is also a member of aptly named band Deep Division. She says the environment is perfect for beginners.

“We have really stable conditions, which are ideal for people starting out,” Zharkova says. “There are no currents, no weather cancellation, and it is protected from sun rays so you can count on your session happening every time you decide to dedicate some time to breath hold.

“It is way easier to learn anything new in comfortable surroundings. The water is crystal clear, warm, and there is relaxing music under the surface. Also there is no need to swim far to get to 10, 20, 30 or even 60m depth – it’s all just there!

“I’d urge anyone to start freediving. No matter how excited, anxious or stressed I am, freediving takes me back to a good place, bringing my focus back to body, breath and balanced thoughts. Spending mindful minutes with yourself is so valuable.”

While Dubai’s indoor centre offers ideal conditions for people to train, the lure of marine life is also powerful. In the UAE, that means heading to the country’s east coast and in Fujairah, where freedivers regularly head down to depths of 60 meters just a few miles from the shore.

“There are two different approaches,” Rakhmatullin explains. “In recreational diving, you can explore the underwater world, enjoying the reef and the water. You will likely be more conservative and do multiple dives, going shallow and then getting out and starting again.

“Your approach to the dive and techniques would be different to competition freediving, which is about pushing yourself to your physical limits. You have one attempt, your preparation needs to be as good as possible and if you make a mistake there, you don’t have a second chance and just have to keep on going.”

Some competitive divers can reach depths of over 700 feet, drop their heart rate to below 20bpm and hold their breath for many minutes. The physiology of freediving has been of increasing interest to the scientific community in recent years, with a 2021 study in the academic journal Chronic Respiratory Disease exploring how techniques used by freedivers could be applied to patients with Chronic Obstructive Pulmonary Disease (COPD). The Danish researchers found that after patients completed a six-week training programme inspired by freediving techniques, they were able to walk further and had a significant reduction in the severity of their symptoms on the COPD self-efficacy scale.

But it is developing mental capacity rather than lung capacity that remains the main motivation for most freedivers. Mohamed Al Jneibi holds a number of UAE national records and at the recent AIDA World Championship in Bulgaria held his breath for more than six minutes (known as Static Apnea) and swam a distance 184m underwater (Dynamic Apnea).

“This sport has an effect on the physiology of the body by reducing the heart rate automatically and that makes you feel relaxed,” Aljneibi tells Livehealthy. “The breathing techniques we use saturate the cells of the body with oxygen, and this gives a feeling of comfort; practising this sport really makes the diver reach inner peace.”

For the Emirati, freediving also provides a special link to the UAE’s pearl-diving heritage.

“Freediving and pearl-diving have a commonality, of course. It is the same with spearfishing too, which is popular where I am from in Abu Dhabi and is how I started. It was from there that I had a curiosity about how much deeper I could go and for how long I could hold my breath.

“This type of connection to our ancestors is one of the reasons I am so proud to be a free-diver and I feel responsible for leading this sport in my community. It makes me train harder to compete globally and represent the UAE.”

Aljneibi says being underwater for such lengths of time is an “indescribable feeling” but urged anyone thinking of taking up freediving to “start with a coach and don’t do it alone”. It can certainly seem an intimidating prospect when faced with these superhumans and their record-breaking achievements, but Rakhmatullin insists there is significant help at hand.

“People who are good swimmers and comfortable in the water can progress to deeper depths quite quickly. But honestly our freedivers have such a range of experience levels; some are total novices, some may have done spearfishing or scuba diving too.

“What is most important is that there are some fantastic instructors here in the UAE and we have built up a great community of people from many different nationalities that is very welcoming. I’d urge anyone to give it a go and they will quickly understand the many physical and particularly mental health benefits.”

Nir Levi Method: 'Every animal is healthier than us'

A guide to adult ADHD