Menu
Hindu Temple Dubai is now open in Jebel Ali’s Worship Village, inviting visitors of all backgrounds and faiths to unite beneath its statuesque domes. At an official ceremony on Tuesday October 4 2022, His Excellency Sheikh Nahyan bin Mubarak Al Nahyan, Minister of Tolerance and Coexistence, Sunjay Sudhir, Indian Ambassador to the UAE and Raju Shroff, trustee of the Hindu Temple Dubai, welcomed devotees to a space “for the people, by the people”. Covering 6,500... 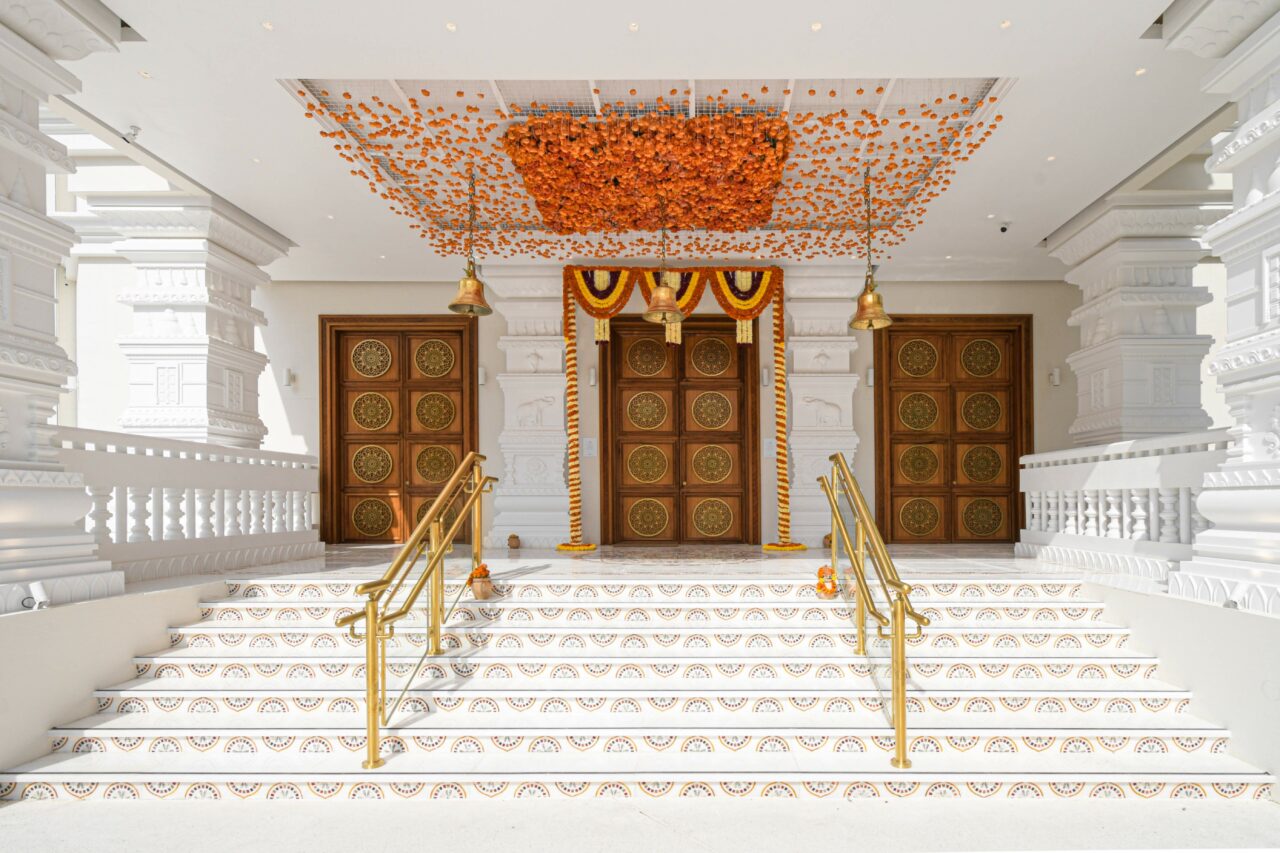 Hindu Temple Dubai is now open in Jebel Ali’s Worship Village, inviting visitors of all backgrounds and faiths to unite beneath its statuesque domes.

At an official ceremony on Tuesday October 4 2022, His Excellency Sheikh Nahyan bin Mubarak Al Nahyan, Minister of Tolerance and Coexistence, Sunjay Sudhir, Indian Ambassador to the UAE and Raju Shroff, trustee of the Hindu Temple Dubai, welcomed devotees to a space “for the people, by the people”.

Covering 6,500 square metres and rising majestically from the desert, the temple is held aloft by grand marble pillars and features nine brass spires soaring from its monumental white edifice.

The house of worship took three years to build, is located beside several churches and a Sikh gurdwara, and marks a potent symbol of the UAE as a leader in demonstrating religious tolerance and pluralism. For Shroff, whose father Vashu Shroff founded the first Indian temple in Bur Dubai in 1958, the temple is a significant step in religious harmony, as well as a new landmark for the city.

“Nowhere else in the world has a place like Worship Village,” he said, addressing the crowd of dignitaries, ambassadors and religious leaders of various faiths. “With the Worship Village, generations, nations and history will remember that Dubai and the UAE is a place that welcomes every person with open arms.”

Inside, the temple features a sprawling prayer room containing 16 Hindu deities, bordered by an adjoining terrace and leading onto an adjoining Sikh gurdwara. The lower section comprises a large banquet hall and an industrial kitchen that can cater to more than 1,000 diners, plus a meditation studio and teaching areas.

In an interview with Livehealthy, Shroff elaborated on how the community-run temple is a place where visitors can come together for community activities and outreach, as well as to pray.

“I’ve been part of the process since the beginning and to see the transformation from building site to temple has been an eye-opening experience,” he said. “Not many people can say they’ve built a temple. I’ve been one of the lucky ones and I must thank God for this opportunity. For me, it’s a huge blessing.

“For the community, it’s a dream come true. Everybody is happy to have a temple open in the middle of Worship Village where you have churches, gurudwaras and mosques all around us. It’s the holiest place in the world we could be.”

More than 900 tonnes of steel, 6,000 cubic meters of concrete and 1,500 sqm of marble were used to construct the temple, in one of the city’s most ambitious religious landmarks to date.

Set over two storeys, the building was inspired by the Mandala design, with each of the 16 deities intentionally placed in specific locations according to their intelligence and powers.

The main prayer hall covers approximately 464 sqm and can accommodate 1,500 people at one time. It is reached by a grand corridor filled with 105 brass bells and lined with polished walnut doors, though the most stunning feature is undoubtedly the central fixture of a hanging lotus, which unfurls across the central dome.

Temple architecture consultant Subhash Bhoite employed his 45 years of experience to make sure every last detail was perfect, while Dubai construction company City Diamond Contracting took care of the building work, all under the watchful eye of founder and managing director Deepak Arora.

“We’re all working in the same spirit of creating something special and meaningful that can be enjoyed by generations to come, so there was no compromise anywhere,” he said.

“It’s not something we build every day and the design process was difficult at times but it was worth it. The temple is a place where you walk in and you feel peace and a lot of thought went into designing that feeling.”

Beside Arora on his mission was his son and company director Raghav.

“It’s been hard work but we knew in the end that it would be well worth it,” said Raghav. “Because of the emotional involvement of ourselves and the community it meant so much more than any other project.

“We aren’t just building a structure here, we’re building a future for a community that we belong to ourselves.”

Building began on the temple foundations in 2019, with special permission granted by the Dubai Government for work to continue during the Covid-19 pandemic.

“At one stage we had around 200 people working on the temple onsite. We worked day in and day out,” Raghav added. “It was a spiritual process to build it because we had to learn about what it means to build a temple but we’re really happy with how it turned out. Today is a good day.”

How to plan your visit to Hindu Temple Dubai

The temple has already been open for a few weeks to test facilities as part of a soft launch, but thousands more are expected to visit the holy site in the coming days. Trustees expect between 3,000 and 6,000 people to visit daily, with more than 25,000 expected to visit over the weekend.

During Diwali and other religious festivals, it’s thought visitor numbers will exceed 100,000.

As parking is limited, worshippers are advised to take the Dubai Metro to the Energy or Ibn Batuta metro stations, and then take bus F44 or taxis to reach the temple.

Your guide to the NBA Abu Dhabi Games 2022