Menu
It’s the largest sports and humanitarian event of the year. 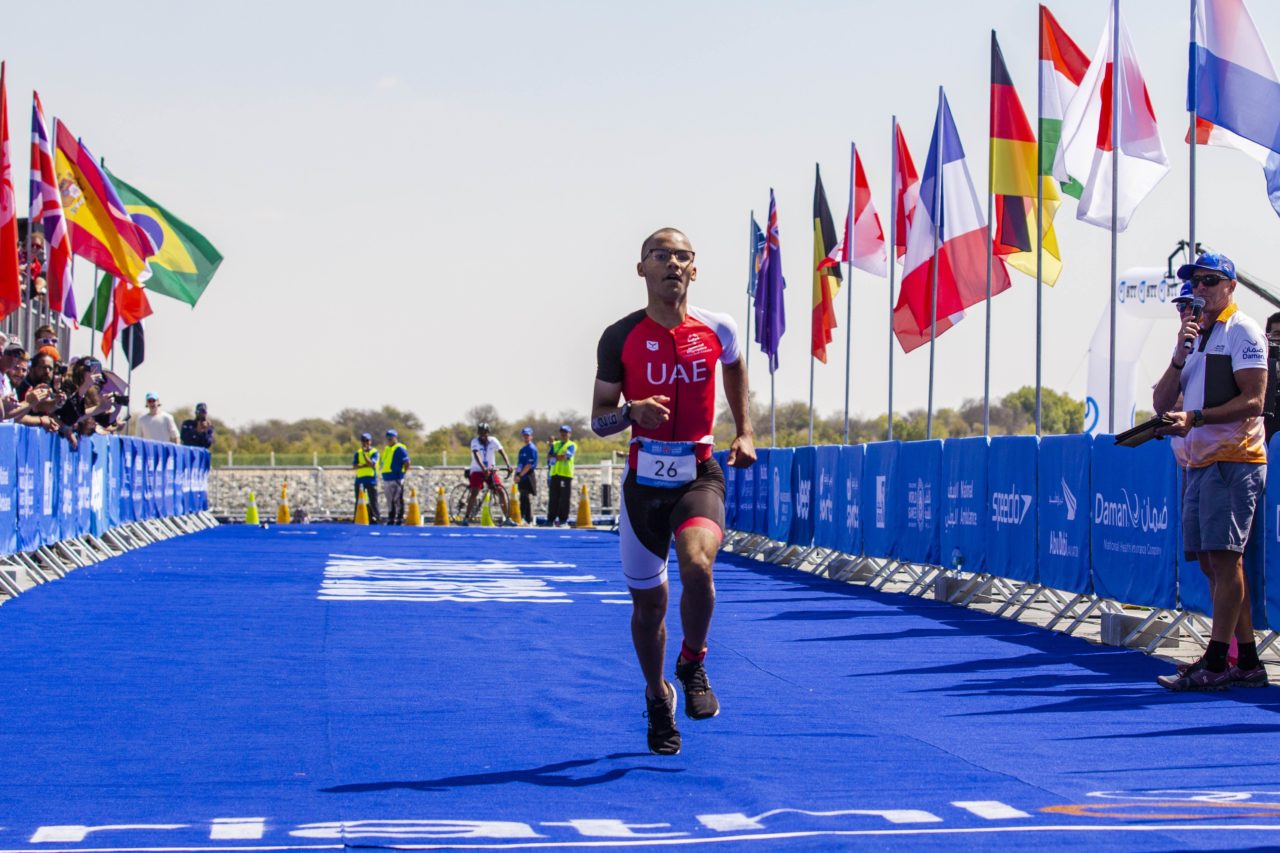 It’s almost time for the largest sports and humanitarian event of the year, when 7,500 athletes from more than 190 nations participate in 24 sports as part of the Special Olympics World Games Abu Dhabi 2019 – the 50th anniversary of the international event.

There is a star-studded Special Olympics opening ceremony

Canadian singer Avril Lavigne leads a lineup of performers who will mark the launch on Thursday, March 19 at Zayed Sports City Stadium. Lavigne has sold 40 million albums in her career – her latest is out this year and called Head Above Water – but also almost a decade ago launched a foundation to support young people living with serious illnesses or disabilities. In 2015, her song Fly was used as the theme for the Special Olympics World Summer Games in Los Angeles.

“These athletes are so inspiring and they are a huge part of what we believe in and support through The Avril Lavigne Foundation,” says Lavigne. “I want to shine a light on their courage and determination and I am honored to have been invited to help support them.”

A record-breaking number of women are competing

When the games start, 2,800 women will be taking to the playing field – almost 40 percent of all the athletes competing. Of those, 412 will be from the Middle East and North Africa – including the first-ever delegation of female athletes from Saudi Arabia, 14 in total. There are also 154 female coaches from the MENA region attending and supporting competitors, and, behind the scenes, 54 percent of women making up the Special Olympics organizing committee.

Among those female competitors who are traveling to the UAE is Josee Seguin, a powerlifter from Canada who overcame a diagnosis of “delicate health” to deadlift 295 pounds and bench-press 137. There is Khadija Zen Al Abdeen, a table tennis player and the first female Special Olympics athlete to compete outside Mauritania. And Hamda Al Hosani, winner of 16 Special Olympics medals who is looking forward to representing her country on her home turf. Al Hosani says she’s powered as much by her love of running as her desire to change attitudes.

“In the Middle East, people look at intellectual disabilities as a bad thing, but I want to change that negative perception,” she says. “I’m a very active person; I don’t like sitting still. That’s why I love running. If I sit down for a long period of time I feel like my legs are hurting because I just want to run.”

In another groundbreaking move, Harper’s Bazaar Arabia recruited seven UAE-based athletes for a photo shoot at Zayed Sports City for its March issue.

As Emirati sprinter Mouza Al Hamed told the magazine: “I can push myself to win. No inshallah!”

There are a number of female Emirati athletes throwing their support behind their Emirati sisters, including Houriya Taheri, who was the first Arab female to receive a professional coaching license. The UAE Women’s National Football Team coach is also coaching the Special Olympics UAE female football team. Figure skater Zahra Lahri, an ambassador for the Games, has played a pivotal role in changing perceptions of Arab women on the global stage. In 2012 she became the first Arab woman to compete internationally while wearing a headscarf — eventually winning a rule change that no points could be deducted because of it.

Tala Al Ramahi, chief strategy officer at the Abu Dhabi Games, is proud that it is during this edition of the Special Olympics that it will record the highest-ever female participation.

“These are the women who are going to inspire and change the world and I am looking forward to standing shoulder-to-shoulder with them and showing the world that there are no ‘disabilities’ for athletes of determination — just sheer determination, talent and skill,” she says.

There is a Special Olympics app and a VR platform

Fans interested in real-time updates on schedules, results, venues and timings for more than 3,000 award ceremonies, as well as non-sporting activities such as Play and Live Unified games, can download the official Special Olympics World Games Abu Dhabi 2019 app, available for Android and iOS users.

Users will be able to find schedules for shuttle buses traveling between venues, as well as maps and route information. The app has indoor navigation capabilities, meaning users can find events within buildings, as well as the nearest exits. There is also an Augmented Reality element, giving fans at each venue the ability to hold their phones up to the action and access additional, computer-generated imagery. The app features profiles of every single athlete, team and sport, as well as results from each discipline. It will also enable the event’s 20,000 volunteers to track their shift schedules.

And don’t forget the Virtual Reality platform that will air 360° shows on YouTube prior to the event, during the opening and closing ceremonies, as well as throughout the Games.

The platform includes a three-part Meet the Determined film series. UAE NOW offers insight into pre-Games preparation, 50 Years of Special Olympics focuses on the history and impact of the organization, while Athletes at Home captures the stories of the various competitors and their families. During the Games, the channel will feature a live, one-hour roundup broadcast daily from 6pm to 7pm, hosted by the UAE’s influencer Max Stanton (aka Max of Arabia).

Fans can also head to the Abu Dhabi National Exhibition Center’s Festival area from March 12 to 20 to try out watching the series on Samsung VR headsets.

Right Where I’m Supposed To Be is to be performed for the first time at the opening ceremony.

It was co-written by Ryan Tedder, lead singer of boy band OneRepublic, the Canadian songwriter Greg Wells — who won a Grammy Award for The Greatest Showman soundtrack — and his wife Nina Woodford. Quincy Jones served as honorary executive producer.

“We have spent a lot of time on the lyrics and the track as we wanted it to be uplifting and inspiring without being too preachy,” saysTedder. “This is the kind of stuff I would want to hear, sitting in a stadium full of people. Fingers crossed that everyone will like it.”

The song will be performed at the Special Olympics Opening Ceremony by Lavigne, Fonsi – who contributed a Spanish verse – joined by Al Jassmi, Syrian performer Assala Nasri, and Hosny.

“I love the fact that Special Olympics is taking place in Abu Dhabi, where East and West will be united,” says Wells. “We want to unite the whole universe on this path. The power that music has with a great song and message can not only cross fake lines on the map but ideological differences.”

There will be a lot of celebrities

Scherzinger, whose aunt has Down Syndrome, is a long-time supporter of the Special Olympics, while Muhammed, who won a bronze medal at the 2016 Olympic Games in Rio, is the first Muslim American woman to wear a hijab while competing for the United States in the Olympics.

Also due to make an appearance are the French swimmer and triple Olympic medallist Alain Bernard, who recently became a Special Olympics ambassador, and the American snowboarder Hannah Teter.

There’s a lot more going on than just sports

Spectators will have many opportunities for education and entertainment with the Cultural Olympia, a series of non-sporting events aimed at creating long-term positive change for People of Determination within the UAE.

“Our hope is that the World Games will start a mass movement and accelerate social change across the UAE and beyond,” explains Al Ramahi. “The Cultural Olympiad has been carefully curated to create a series of events that not only entertains, but also engages and educates the thousands of people in attendance, and in turn leaves a legacy long after the Closing Ceremony of the Games.”

The Olympiad includes a Global Youth Leadership Summit, Inclusive Art Exhibition, Unified Sports zones and a Special Olympics Festival. The Special Olympics Festival areas will be located at ADNEC, Zayed Sports City and Hamdan Sports Complex. In addition to the VR zone, the Department of Energy and Aldar Properties will be hosting games, while Bounce will be offering trampolining.

The Inclusive Art Exhibition will be open for visitors at Emirates Palace from March 16 to 28. And from March 15 to 20, Play and Live Unified fields will offer seven-a-side football clinics, while Unified Sports is offering 16 matches, races, tournaments and team competitions across five venues in Abu Dhabi, bringing together people with and without intellectual disabilities.

The Special Olympics  will also coincide with the fourth Mother of the Nation Festival, running from March 12 to 23 at Al Bahar at the Corniche.

During the Global Youth Leadership summit, held in the capital from March 14 to 18, more than 150 youth leaders from 37 countries will come together to figure out ways to implement the inclusive vision of Special Olympics in their home communities.

Lastly, the Stand up for Inclusion Concert, on March 16 at Emirates Palace, is a partnership between the Abu Dhabi Festival, the Special Olympics World Games Abu Dhabi and Special Arts Festival Korea. Korean musicians and singers with intellectual disabilities will be joined by the Grammy Award-winning soprano Sumi Jo for a 90-minute concert that will be free for anyone to attend.

All the Special Olympics events are free

Aside from the opening ceremony, for which tickets are Dh100, admission to see the sporting events as well as the awards ceremonies during the Special Olympics is free, requiring only prior registration. The Special Olympics World Games Abu Dhabi 2019 will be held between March 14-21 in Abu Dhabi and Dubai.

Inside the first Dubai Shero Summit

How to get your kids moving in Dubai