Menu
Visit any of the shisha cafes in the cities of the Gulf states and it isn’t hard to see why smoking tobacco through a water pipe is becoming increasingly popular among the young people of the region,  locals and expats alike. After all, what’s not to like about kicking back in a trendy waterside cafe with friends, watching the sun go down over the Gulf and listening to cool sounds as you pass the hose and... 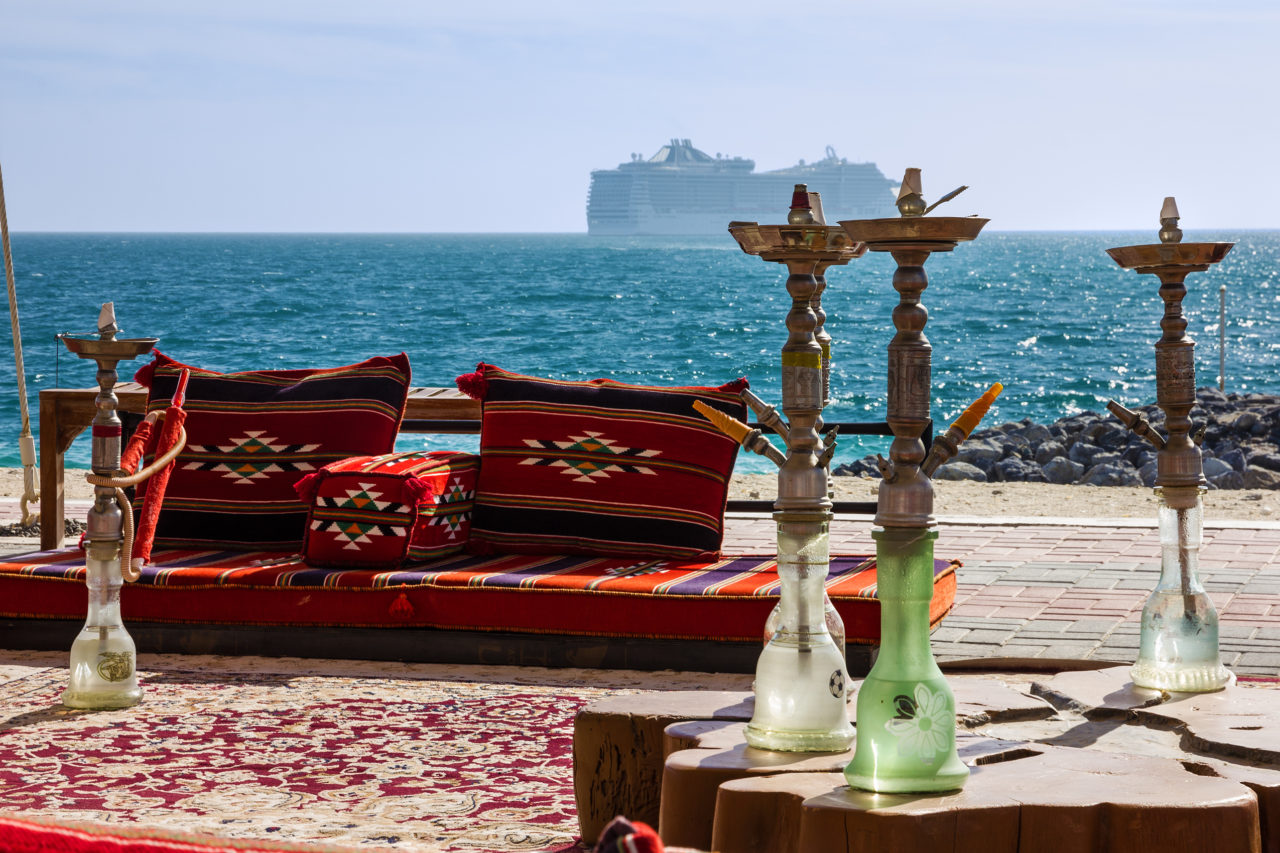 Visit any of the shisha cafes in the cities of the Gulf states and it isn’t hard to see why smoking tobacco through a water pipe is becoming increasingly popular among the young people of the region,  locals and expats alike. After all, what’s not to like about kicking back in a trendy waterside cafe with friends, watching the sun go down over the Gulf and listening to cool sounds as you pass the hose and share the latest fruit-flavored tobacco?

Well, quite a lot, actually, as the latest study into the harmful effects of shisha smoking makes clear in minute detail.

The smoke you’re inhaling may be bubbling up through water and taste and smell like candy. But the bitter truth is that shisha is no better for your health, and almost certainly is a whole lot worse, than smoking cigarettes.

Researchers at the University of California, Irvine, have published the results of a study that for the first time analyzed in minute, real-time detail all the emissions from a water pipe during a series of 30-minute sessions.

The “remarkable” headline finding, published in the journal Aerosol Science and Technology, was that the number of ultra-fine, noxious particles inhaled in a single draw from a water pipe was “often equivalent to smoking more than one entire cigarette.”

Hookah smoke directly inhaled by the user “has many toxic and harmful chemicals, such as nicotine, which can lead to tobacco addiction, irritating carbonyl compounds and benzine, a known carcinogen,” says lead author Veronique Perraud, of UCI’s department of chemistry. “And due to the greater volume inhaled for every puff and the longer duration of a smoking session, the hookah often delivers a higher dose of those chemicals to the smoker.”

The tiny particles detected in the research are particularly dangerous because they can make their way deep into the pulmonary system, and the smallest can even cross the “blood-brain barrier”, a semipermeable barrier of cells that protects the brain from most harmful substances carried in the bloodstream.

One of the big myths about hookah use is that the water somehow filters out the toxic chemicals. In fact, says Perraud, the study shows not only that this is not the case but also that, possibly due to its cooling effect, “water actually promotes ultra-fine particle formation.”

This not only supports previous findings that the cooling effect of the water enables users to inhale the smoke more deeply into their lungs but makes them even more worrying.

The researchers also found that the water pipe generated “an outsized quantity of carbon monoxide” from the burning of charcoal to heat the tobacco. The study, funded by the US National Institutes of Health, identified several reported cases in which hookah users had suffered from carbon monoxide intoxication.

This latest study adds to a growing body of research into the dangers of shisha, a practice once limited to the Middle East and parts of Asia that has broken out to become one of the great cultural crossover trends of the century so far.

Nations which had signed up to the World Health Organization Framework Convention on Tobacco Control woke up to the scale and nature of the problem only as recently as 2014. For decades, the focus of international public health initiatives had been on cigarette smoking. The threat posed by shisha crept up, largely unnoticed.

Delegates to a conference in Moscow in 2014 were told that while shisha was still most prevalent in Asia, Africa and the Middle East, it had become “a rapidly emerging problem in Europe, North America and South America.”

In countries in the WHO’s Eastern Mediterranean Region – 21 states including Bahrain, Iraq, Kuwait, Qatar, Pakistan, Oman and the UAE – shisha was even more popular than cigarette-smoking, “with growing use by men and women and, most seriously, among youth and children.”

The evidence against shisha has grown exponentially since the turn of the century, and the current state of knowledge was summed up in a special edition of the journal Tobacco Control in 2015.

Water pipe smoking, the authors concluded, was associated with “the same extensive laundry list of adverse health effects as cigarette smoking” – and what a list it was.  Shisha users were at risk from everything from bronchitis, emphysema (damage to the air sacs in the lungs) and lung, gastric and esophageal cancers to dental disease, osteoporosis (thinning of the bones), obesity, metabolic syndrome and even mental health problems.

And, of course, as an added bonus, the use of charcoal to heat the tobacco exposes water pipe users to the risk of carbon monoxide poisoning.

Because water pipe smoking delivers far higher doses of nicotine, the editors of Tobacco Control reported that “for many users, this exposure may result in dependence, revealed by withdrawal symptoms when they abstain, relief of these symptoms when they smoke and difficulty quitting, even when motivated to do so.”

Water pipe dependence is complicated by the factors that make it attractive to many users in the first place – the “specific sights, sounds and smells and the highly social and ritualistic nature of its use.”

Young people, it seems, are particularly vulnerable to the “charms” of shisha because they don’t associate it with the same level of harm posed by smoking cigarettes and for those increasingly adopting the habit in the West, shisha has an alluringly exotic appeal.

Research carried out in 2016 by the University of Florida and funded by the National Institutes of Health National Cancer Institute used a series of focus groups held among students who identified “many positive associations and few negative associations of hookah use.”

Asked to complete the phrase “Hookah smoking is…,” more than 75 percent of respondents attributed positive attributes to the practice. For them, smoking shisha was perceived to be relaxing, social, entertaining and fun.

Common comments were that it was “cool,” with an appealing “foreign aura” and was “less unattractive and less offensive than cigarettes.” A number of students, especially women, said they were attracted to the different flavors on offer.

In a paper published in the journal Substance Use and Misuse, the researchers concluded that there was an overall false perception among young people that hookah smoking was safer than cigarette smoking.

Despite attempts to regulate and limit its use in public spaces in some states, shisha is increasingly popular in the Gulf, even among those who should know better. Dangerous myths about shisha smoking persist even  among highly educated young people with medical training. According to a paper published in the International Journal of Dentistry in 2018, only 63 percent of shisha users at the College of Dental Medicine at the University of Sharjah in the UAE thought the practice was addictive, with only one in 10 believing it was more addictive than smoking cigarettes. Only a quarter realized that smoking shisha could lead to cancer or dental problems.

Because shisha is seen as a part of regional culture, governments have hesitated to act sufficiently robustly to curb the epidemic of use. While cigarette smoking is banned in cafes, often shisha is not. A new tax on tobacco and e-cigarettes, as well as sugary drinks, is due to go into effect in the UAE in January.

Even where legislation has been introduced, it is either not enforced or it misses the mark. The UAE, for example, introduced new rules for shisha cafes in 2014, but these were concerned mainly with banning them from operating within 150 meters of residential areas, schools and mosques. They did little to limit the risk posed to individual smokers, whether in cafes or in homes.

According to the latest edition of the global Tobacco Atlas, nearly 12,500 lives a year are cut short by smoking-related diseases in the six states of the Gulf Cooperation Council – 7,000 of them in Saudi Arabia and almost 3,000 in the UAE. In the GCC the prevalence of smoking ranges from 17.5 percent of the population in Oman to over 44 percent in Bahrain.

But these figures, based on responses to surveys, are almost certainly an underestimate. A study that for the first time checked how much people said they smoked against a urine test to measure nicotine levels in their bodies indicated that the reality could be even worse.

The World Health Organization says 25 percent of the population in its Eastern Mediterranean Region uses tobacco, compared with a global prevalence of 22.7 percent. In the UAE, reported rates of smoking are close to the regional average – 24 percent of men and under 1 percent of women. These figures, however, could be dramatically wrong.

As part of the the UAE Healthy Future Study, a group of 517 Emirati men and women were first asked whether they smoked and were then tested. About 36 percent of the men claimed they used tobacco, including cigarettes, shisha and dokha, but only 3 percent of the women. However, testing, revealed the true percentages to be 42 percent and 9 percent.

The precise role of shisha in tobacco’s evolving health epidemic remains unclear. But it is growing in popularity even as authorities across the region work on reducing cigarette use, which means many young people may be swapping a devil they know for one that they don’t – and setting themselves up for horrendous health problems later in life.

Need help on how to get your kids to eat healthy? Here are 7 ways!

Here's your guide to the Dubai Fitness Challenge