Menu
Should little boys play with dolls? Of course they should, just like little girls should play with trucks. Just be prepared for the criticism. 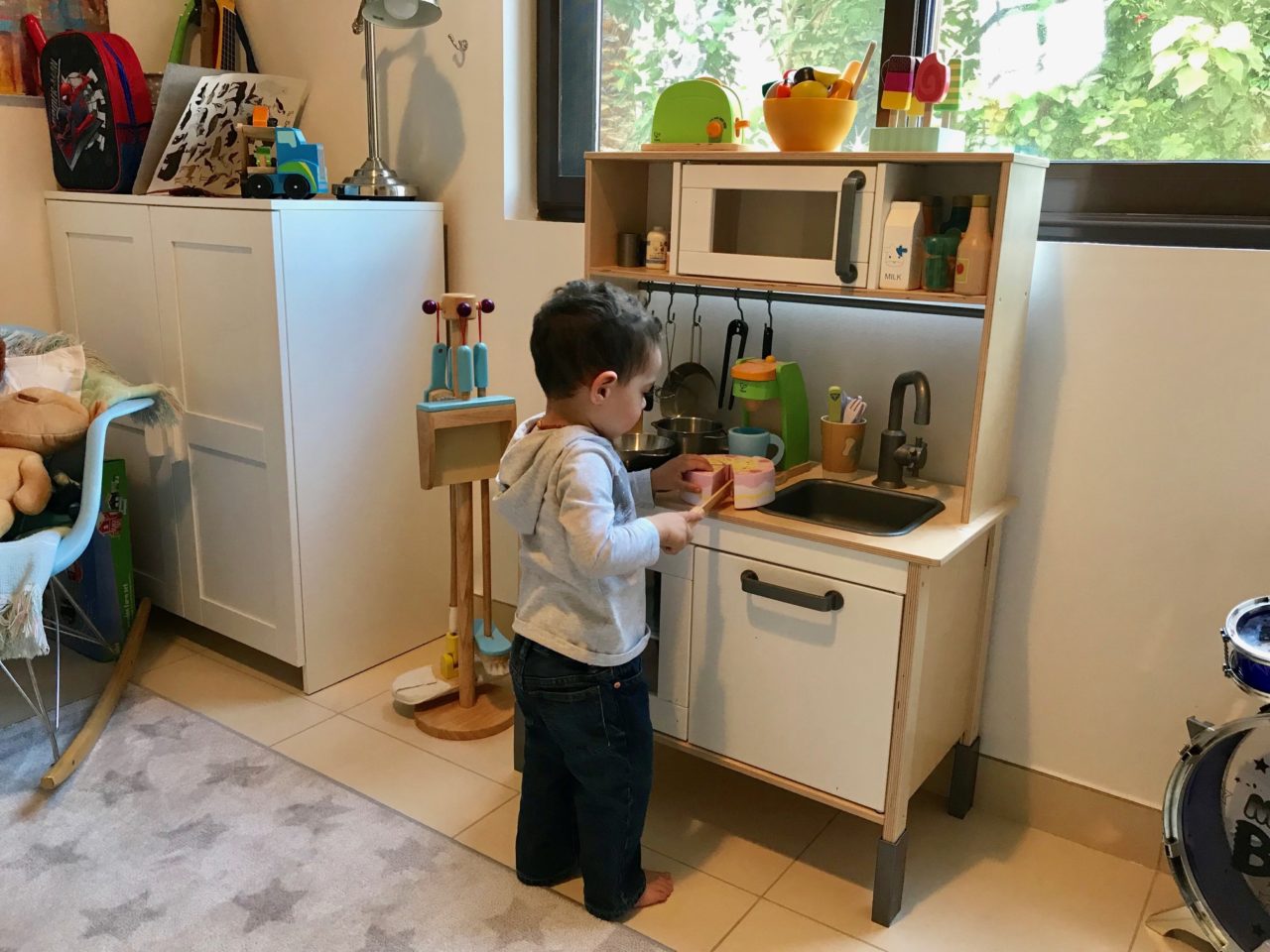 When my son was two my husband and I surprised him with a play kitchen and a wooden cleaning set for his birthday, items I spent weeks hunting for so I could buy them secondhand, knowing the little guy would love them. From his then-six-year-old sister, he was gifted one of her many dolls, one with a mouth that opens and shuts for pretend food — which she had wrapped up herself.

“This one is yours forever, Yousif,” she announced.

My little boy was over the moon. He promptly sat the doll down in a toy high chair. Methodically, he prepared a plate of wooden carrot pieces with a plastic knob of butter on a plate, and presented it to his new doll complete with a knife and fork, before rummaging in a nearby toy bin for the doll’s bib. He then offered to make me a cup of coffee and served it to me with an ice cube on the side. What ingenuity! Once he was done in the kitchen, he grabbed his new, toddler-sized, wooden broom and cleaned up the vicinity for any wayward – albeit invisible – crumbs.

Typically, I snapped dozens of pictures of the pretend play he was engaging in, and began sharing them with friends and family via WhatsApp, mostly to marvel with them that my little boy was already two. Most of the replies were incredulous.

Should boys play with dolls?

“Wait, you got him a doll for his birthday?” exclaimed one respondent.

“Yousif’s birthday presents are a kitchen, a cleaning set and a doll? Are those Alana’s things, or really his presents? How come?” asked another.

“But didn’t you get him any cars or trucks, or dinosaurs? I thought he liked Spider-Man,” came a confused third.

And on it went. I was beginning to see a theme here, and out of curiosity with how it would be perceived by others outside my immediate circle, I posted a picture of him on social media playing with his new gifts, clearly mentioning that a play kitchen, a cleaning set and a doll were his birthday presents this year.

The comments began flooding in. I lost count of how many private messages I received, all of them making some sort of comment about what, apparently, were “unusual” gift choices for a male toddler. Some applauded our choices, while others expressed shock and trepidation. Other mothers who also, like me, have a boy and a girl, said their son often plays with their daughter’s dolls, then would laughingly mention that it’s frustrating (and maybe even worrying) to their husbands, or their in-laws, or their parents, or so on.

I shouldn’t have been so surprised. but what message are we sending our sons if they see us begrudgingly “allowing” them to play with their sister’s toys, and only because those toys happen to be there, as if these “girl toys” were made for the lesser race?

Children copy their parents. They emulate what we do and learn from our actions, much more than from what we say to them. Wouldn’t it stand to reason, then, that my son would want to fix me a cup of coffee in his little play kitchen, in the same way that he sees his father making me my morning cup? He sees his father vacuuming the house regularly, which would explain why my little guy is so adept with a broom. His world revolves around being cared for by us, as we seat him in his high chair and prepare to feed him his meal; exactly as he is doing with his little doll.

If a little boy grows up without an older or younger sister around, then he wouldn’t have access to “girl” toys. And yet this little boy will grow up to become a father pushing his own child in their pram, which is perfectly acceptable and normal. I very much hope he grows up to become a man adept at changing his child’s diaper, a man who knows his way around the kitchen and can prepare a healthy, wholesome meal. Why, then, has it been labelled inappropriate for a boy to engage in that type of pretend play as a child?

The very purpose of pretend play is for children to model the activities they will engage in as adults. Their toys should help them practice the behaviors they find most interesting and important in their great big worlds. My son, at two, could not relate to superheroes and monster trucks, and definitely not to weaponry, in the same way as he could caring for a doll, cooing quietly to it, reading it a book and taking it for a walk.

If we tell boys that we’re “letting” them play with dolls or kitchen sets, waiting for them to ask for those toys rather than automatically exposing them to a balanced variety, then what message are we sending? Won’t we end up raising a person who does not and cannot understand gender equality? Someone who will automatically think he is above the female population?

How to build gender equality

The same goes for our girls. If I only ever exposed my daughter to princess dress-up clothes and make-up sets, and shy away from buying her science experiment kits or the fireman outfit she’s been coveting or a really cool set of blocks we can use to build a little city, then wouldn’t I inadvertently be telling her that girls cannot naturally become scientists, or rescue workers or architects? I do not want to surround her with the social pressure girls have to face these days to break from innate stereotypes, so if she prefers her dolls and princesses to her blocks and Legos, that should be absolutely fine. My job, however, is to provide exposure, to keep the possibilities open, to say neither is right nor wrong.

Research has found that dividing children’s toys based on gender can have lasting developmental implications. Studies have proven that toys help children learn new skills and develop intellectually. So, for example, dolls and pretend kitchens are good at teaching kids cognitive sequencing of events and early language skills, not to mention teaching boys about nurturing and care taking and emotional intelligence. Building blocks like Lego and puzzles teach spatial skills, setting the groundwork for learning math principles down the line. Both genders would lose out if we put our kids on only one track and don’t allow them to explore their creativity and develop their imagination.

Boys will be boys – right?

That’s a lot of pressure to place on the toys we choose to buy our kids. We live in the age of the #MeToo conversation, and we now realize how early boys are taught to “act like a guy” and what negative connotations are associated with that. Breaking stereotypes and allowing boys to be caretakers are some of the solutions.

We should work to introduce a range of toys to all kids, to stop categorizing toys as boys’ or girls’ or gender neutral and to provide the material goods that will help kids develop the interests that might later drive their passions.

Consider this: what if we bought our kids toys based on what they like to play with, and not what we think they should be playing with? Or chose toys based on our children’s interests, and not their gender? Even if that meant, as it did in my case, that my daughter far prefers princesses and dollies to the trains and tool sets I tried to push on her when she was younger.

I know better, now. I don’t have to force cars and dinosaurs on my little son until he expresses serious interest after I’ve offered some mild exposure. Until then, I am happy to have him potter around in his play kitchen, and spend the better part of an afternoon dragging a rag all over the house while “dusting,” taking repeated breaks to cover his little toy doll with a baby blanket for its two minute nap. He’s playing with toys he loves, toys that help him model caring, compassionate behavior that will one day become a reality of his life. He is playing beyond gender stereotypes and hopefully, this way, both he and his sister will understand that femininity can embody strength, and that masculinity can absolutely – and should, ultimately – embody vulnerability.