Menu
It's come to this. 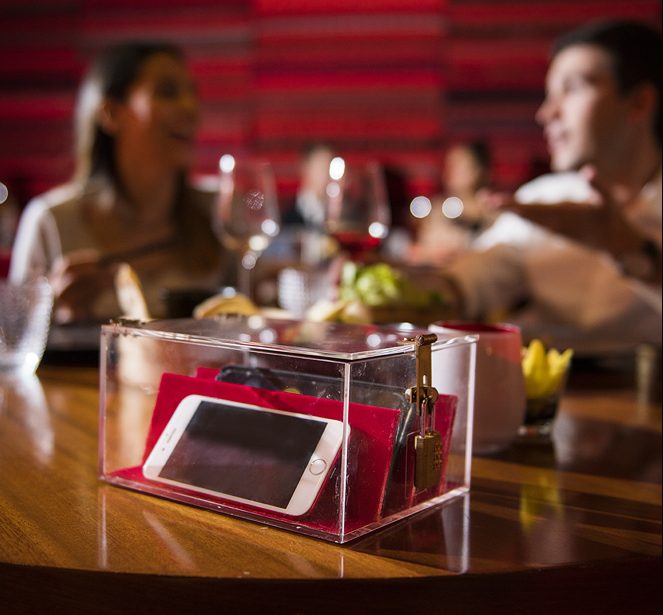 It’s come to this: a no-mobile challenge. The restaurants at the Ritz-Carlton in Abu Dhabi, The Forge, Li Jiang and Mijana, are challenging diners to lock away their phones for the duration of dinner. They are given a chic, transparent locked box for their phones and then if no one touches them, they are rewarded with 20 percent off the bill.

But is that kind of savings enough of an incentive? The move comes during a week when a YouGov survey in Britain found that most people can’t make it through a meal without checking their phones. Out of a survey of more than 2,000 people, 55 percent reported checking their phones during dinner and 53 percent said they looked at their phones even when out with family and friends – a finding reflected anecdotally in any given restaurant in the UAE.

The maximum amount of time people can go without being bothered about checking their phones? Two hours, reported 54 percent of those surveyed.

Most people can’t even make it through a yoga class these days without checking their phones. Kat Owens, an American yoga teacher in Abu Dhabi, starts her classes by imploring those present to shut their phones off. During four recent classes she was really lucky, Owens said with gentle sarcasm. A phone had rang in each one, but none of the students owned up to it.

The Ritz-Carlton no-mobile challenge follows a number of other attempts to get people to put their phones down and live in the real world, including the first Scroll Free September. Apple and Google have added features to make tracking phone use easier. Apps such as Moment really do help individuals win the sometimes moment-by-moment battle with their electronic addiction of choice.

As for the Ritz-Carlton Abu Dhabi initiative – good on them. And while we love saving money as much as the next person, wouldn’t it be better to have the phones taken away, rather than just sitting there, lighting up every few minutes, ringing, beckoning?

The real meaning of mindfulness in the Middle East

This Dubai studio does the stretching for you