Menu
The science behind this 60-minute workout is that working out in the orange zone produces a maximum calorie afterburn, for up to 24 hours. 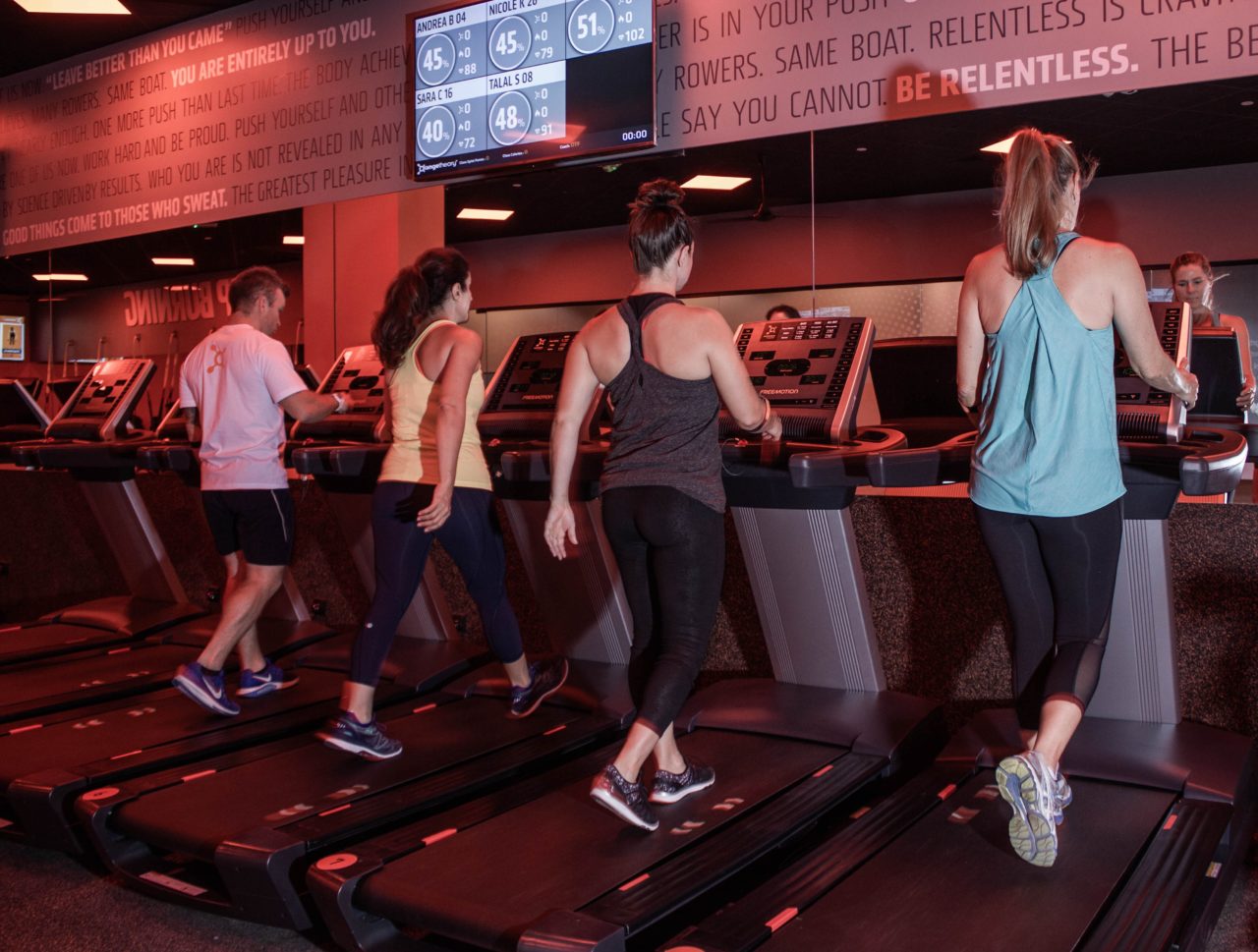 Maia Fahmy, a 22-year-old professional from Egypt, has been to Orangetheory Fitness Dubai every day for the last month, losing weight and the lethargy she built up at university. After several weeks, she’s completing the entire 12-minute run that’s at the center of the hour-long HIIT workout. She’s also gained energy and says all her clothes fit better.

“Honestly, the push is amazing,” she says, with a visible glow to her mien. “It’s improved my fitness, and they are so friendly and they just push you.”

To be honest, I was dreading my visit to Orangetheory Fitness (OTF) Dubai, which snuck into Times Square Centre over Ramadan. I’m only fit-ish these days. And I’ve never been a fan of classes that pit participants against each other, leaderboard style, because I dislike the public humiliation that comes when I am near the bottom. Years out of competition, perhaps growing grumpy, I consider sweating and panting a good enough indicator of my effort, without the comparisons.

Jalila, a friendly-yet-firm trainer from New York City who also works at Physique 57, took me and several other newbies through a half-hour orientation of the coming workout, which would mix treadmill running or walking with rowing and weights intervals. Those would involve a mix of TRX, hand weights and some plank-style maneouvers.

She explained that we want to be in the green zone (71 to 80 percent of maximum heart rate) most of the time, and in orange for 12 to 20 minutes. Orange is known as the uncomfortable zone, as it happens when you are working at 84 to 91 percent of your maximum heart rate.

The science behind this 60-minute class is that working out in the orange zone for this amount of time produces a maximum calorie afterburn for up to 24 hours.

As the class got going, I realized that although my Orangetheory results were there for all to see, they only indicated how hard I was working, not whether I was losing some sort of race. I felt a lot better, the way I do any time I’m only competing with myself. But I was also compelled to step up and make the most of it.

Wanting to be in the green zone, as well as orange, proved a powerful motivator, as was Jalila. She was right there every time one of us tried to take a breather, yelling things like: “Why are you walking?” and “Don’t believe your brain.” My favorite admonition has to be: “Sitting is not an exercise.”

Feeling what it’s like to go to 96 percent of my maximum heart rate during the minute-long “all-outs” was a long-lost experience to me. It hurt.

On the nitpicking side, Orangetheory – the fastest-growing chain of gyms in the world, with about 1,000 locations worldwide – is a little bit too orange inside the studio for my liking. And the only other woman there who appeared to be in her 40s asked if they could turn down the music. (If everyone else agrees, was the answer) But it’s also brand-new and immaculate, spic and span, with fluffy free towels in the changing room. And a slick operation, indeed.

According to the workout summary I received by email later that afternoon, I spent 19 minutes in the orange zone and seven minutes in the red. I worked an average of 79 percent of my maximum heart rate, burned 560 calories and limped away with 26 splat points, which is a lot.

I was also left with a pounding headache for several hours, which sometimes happens when I exercise vigorously. I can’t really blame OTF for that, but I will take it down a notch next time.

The takeaway is I have never felt more exposed and monitored during a fitness class than I was when I tried out Orangetheory Dubai. It’s very much like having a personal trainer, only cheaper. And as a result, I worked out harder than I could ever have imagined, or was prepared to. And that is what you pay a gym for.

Orangetheory Dubai is in Times Square Centre. The first class is Dh135 plus VAT. Heart-rate monitors rent for Dh40. Various packages are available and the monitors can be purchased for Dh400.

#cheatday: Guy Fieri's Kitchen is coming to The Dubai Mall