Menu
Until this year, there was nothing that appealed to me about fasting or a diet that mimicked fasting. I’ve always been a three square meals, two snacks a day kind of person who gets hangry – fast. I once had to fast before an operation and dissolved into sobs by the end of the day. Even as the research about the benefits of intermittent fasting has been mounting – particularly the way it helps your... 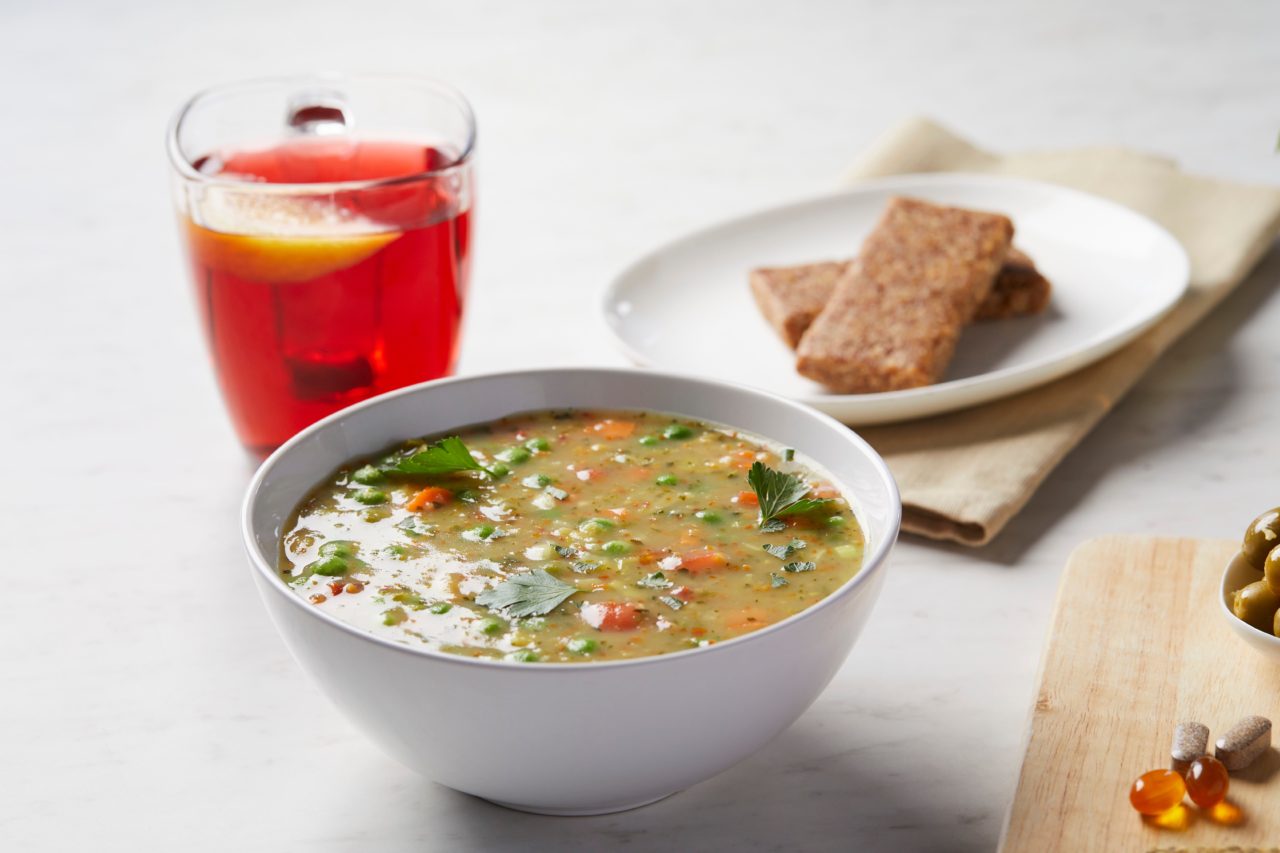 Until this year, there was nothing that appealed to me about fasting or a diet that mimicked fasting. I’ve always been a three square meals, two snacks a day kind of person who gets hangry – fast. I once had to fast before an operation and dissolved into sobs by the end of the day. Even as the research about the benefits of intermittent fasting has been mounting – particularly the way it helps your body clean out damaged cells, a process known as autophagy – I have remained steadfast in my opposition.

But then we were contacted by a company called L-Nutra about their plan to launch ProLon, billed as “the world’s first fasting mimicking diet,” during Arab Health at the end of January. This was before we knew the company was going to be featured in The Goop Lab, the controversial Netflix spinoff of Gwyneth Paltrow’s US wellness website Goop.com.

As the editor of the UAE’s only online magazine devoted to men’s and women’s health, I had noticed ProLon even before connecting it to Goop. I was also intrigued by the element of hormesis, which is what happens when you intentionally place the body under an amount of stress or subject it to a challenge – whether it’s a HIIT class or an icy shower – to promote a favorable biological response. Basically, a little stress or challenge makes the body stronger, so it’s prepared for the next time you do it. This works on a mental level, too. I experienced both when I attended the first Wim Hof Method workshops in Dubai in February.

With a two-minute ice bath under my belt and armed with information about the host of benefits intermittent fasting has been proved to offer (including lowering blood pressure and inflammation, reducing body fat, alleviating conditions related to diabetes),  I decided was in. I have a history of killer cancers in my immediate family and I want to do everything I can to keep my body in a healthy state.

While many people believe that water diets are the way to go, ProLon’s approach involves packaging up the minimum amount of food, so as to trick the body into thinking it is fasting. Calorie content ranges from 770 to 1,100 per day, and the assorted bars, squares, tomato, minestrone, mushroom and vegetable soups and teas come packed in five tidy boxes.

It’s important to note that people embarking on any fasting regime should be cleared by a doctor first. Do not do it alone. On the advice of Dr Nasr Al Jafari, functional medicine specialist at DNA Health in Dubai and a member of the livehealthy.ae expert panel, I also steered clear of HIIT and other strenuous exercise and stuck to walking.

If you want to know a little more about Prolon, catch up on our interview with Dr Joseph Antoun, L-Nutra’s chief executive. And for a view from someone who has spent years believing the foundation of her health and happiness relied on eating every few hours, then read on.

The first day is one long, continuous argument with myself about when and how to eat the first, small box of food provided. I have not helped matters by having a large meal at Black Tap, complete with libations, the night before. The little bits of food are so small they are torturous: a tiny packet of olives; some kale crackers. Plus, overwhelmingly, I am craving something fresh and leafy. I even Google “how many calories in a salad without dressing?” Turns out, it’s 33. So why can’t I have a salad? Can’t I just have a salad? Can’t I eat some watermelon? Can’t I make a juice at least? One of my biggest battles on this day is anger, pure and simple. At who, I’m not sure.

I am tired and feel a bit like I have the flu. I can’t believe how many times a day I think about food. And because of this, I have a slight feeling of depression. I am tired and useless this day, with uncomfortable bouts of bloating. Again, I want fresh vegetables. Later that evening, I realize the gas canister attached to my cooker is empty and I break down and eat a tomato instead of tomato soup. The instructions say we must drink the tea provided, but I’ve tried them all and don’t much care for any of them.  At night I cheat and eat a carrot. It tastes more amazing than any carrot I can remember. I wake up multiple times in the night feeling very hungry.

When I get up, very early, I take a long moment and collect myself when I see the contents of the box. Two soups, some kale crackers (I felt like I was greeting an old friend when I saw them), a bar, a supplement and that dreaded tea. There is also a weirdly sweet glycerine drink that I spill all over myself, because the plastic ProLon bottle provided doesn’t work very well. Even though I don’t eat a thing until after 1pm, rationing my rations, I am actually not very hungry. I am feeling amazing. I feel seriously focused and get a ton of work done. I also go for a 90-minute walk in the late afternoon.

I only sleep for five hours, but when I wake super early, I am refreshed. During the day, I realize how slowly I have been eating. I haven’t even watched television or read a story during any of these mini-meals, which is very rare. This is an important development and one I hope I can take from the experiment for good because I am by habit a fast eater and that is not great for digestion or gut health. My focus is even stronger today. My stomach is flat and I admire it in the mirror. I go for another long power walk.

Another night of only five hours of sleep. When I text Dr Al Jafari to ask what is going on, he explains that in the short term, when some people enter ketosis they can develop insomnia due to lower levels of serotonin and melatonin. Paradoxically, they experience higher energy because the sleep they do have is deeper. This seems to explain my experience. He says it also usually goes away. I also feel like I’m buzzing – euphoric, even – and Dr Al Jafari says that could be a reflection of the spiritual aspect of fasting and the sense of enlightenment that so many practitioners report.

There are a couple of things that bother me about ProLon. If you take a good, long,  honest look at the paltry assortment of dried food, bland soups and not-very-nice tea, the Dh1,100 price really boggles the mind (especially a mind that’s fasting). A great deal  of time and energy has gone into developing and testing out this product, so it pains me to say I’m going to try my own version next: whipping up a few soups, buying a jar of olives and making some clean energy bars.

When you Google “FMD” or look at the hashtag on Instagram, it turns out that’s exactly what people are doing all over the world. Time will tell how that works for me. I’m aware that with ProLon, you know you are getting exactly what nutrition you need. If price is no obstacle, it’s a very efficient option. Dr Al Jafari prefers water fasting, finding that if he’s around some food he wants all the food, and that is also something I’m ready to explore.

My other issue stems from livehealthy.ae’s recent deep dive into orthorexia, which made it clear that there are a lot of people struggling with this whole “clean eating” trend – not to mention anorexia and binge eating and all the other diet-related psychological issues in between. So doing this fast and promoting it on online magazines like this one and on our associated social media channels is potentially fraught with problems, which is troubling.

One of the most common questions on Google about this program is “How much weight can you lose on ProLon?” The answer: in clinical trials of one ProLon course each month for three months, subjects lost an average of 2.4kg of fat. I lost 4.5 kilograms. On The Goop Lab, we learned that company founder Paltrow reduced her biological age by two years by doing ProLon. Viewers were not told how much weight she lost, however, which makes me think Goop HQ had the same concerns that we do here at livehealthy.ae. To add to my concerns, a fitness trainer friend who was doing ProLon at the same time as me lapsed into a major binge-eating session the last day, prompting the cycle of shame and low mood with which she is all too familiar.

I was able to ease back into normal eating over the weekend, and adjust my normal diet downwards slightly. Intermittent fasting has also been shown to help women my age who are going through perimenopause to lose weight and fat, and I have to say that of all the methods I’ve tried to shift weight in recent years, this was the most effective. Weeks later and I have managed to keep about two-thirds of the weight off. I also felt more energetic, lighter and more like myself than I have in months. My skin looked amazing. It was a great kick start for a renewed devotion to my health. I’m still eating more mindfully and am blown away by the mental strength I didn’t know I had.

The bottom line? I’d recommend ProLon, but only to busy, well-off people who can well afford the price tag – and who do not have the slightest hint of any eating disorder.

• ProLon was provided to livehealthy.ae free of charge for the purposes of this review. The company delivers throughout the UAE. Want to win your own case of ProLon? Head over to Instagram and catch our giveaway

How the UAE is using AI to fight Covid-19

11 of the best sweet treats everyone can eat