Menu
Spartan global ambassador? Check. Under Armour model? Check. It's no surprise that Simon Pepper is in the gym every day and at races every weekend. 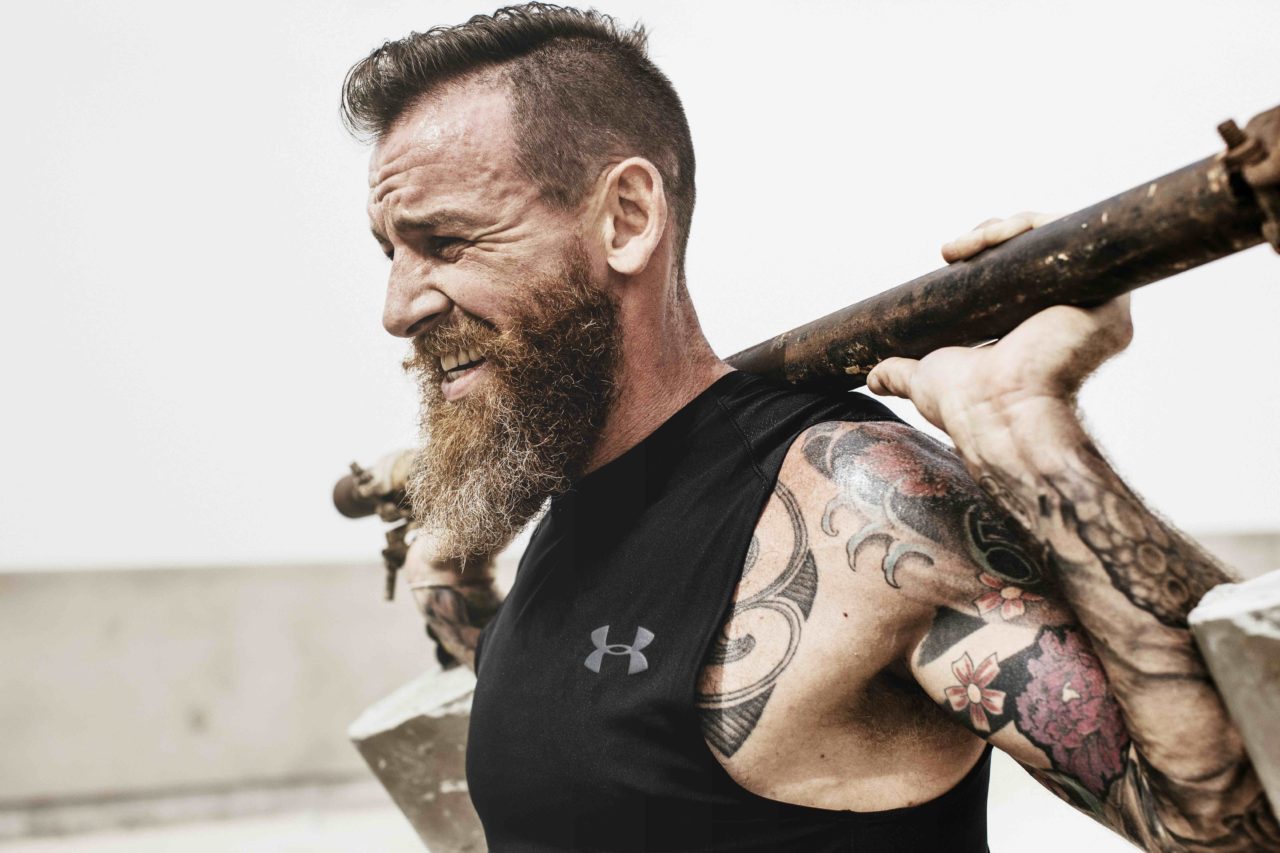 That huge image of a ripped guy with a bushy beard and tattoos, the one splashed across local Under Armour stores all summer: Who is he? Well, that was Simon Pepper. A 42-year-old British father of two living in Abu Dhabi who works for a shipping company. What else? CrossFit enthusiast. Global ambassador for Spartan.

“I was inside and outside every Under Armour store in the GCC,” Pepper says. “Which was impressive, but quite embarrassing for my daughter.”

The ads are gone now, but Pepper is still wearing an Under Armour T-shirt (he’s got lots of those). When livehealthy.ae meets him, he has just finished a killer 75-minute workout at his gym, Arena Fitness CrossFit in Abu Dhabi. Freshly showered, he’s still sweating a bit when he orders an almond latte at Local, Al Zeina’s trendy new coffee-barber-high-end shoe shop next door.

Pepper is the kind of guy you definitely look at twice, although it wasn’t always that way (more on that later). He’s the kind of guy who decides it might be a bit of a challenge to go a marathon-length distance on a famously difficult stationary assault bike – while wearing a 20-pound vest – on a random a Monday night.

“Get comfortable being very uncomfortable,” he posted on Instagram after the 42-kilometer, hour-plus session.

Pepper is the kind of guy who early last month went on to run three of Spartan’s now-famous obstacle races – think jumping over fire, crawling through mud, etc – at the Spartan World Trifecta Championships in Sparta, Greece. That was despite tearing the anterior talofibular ligament on his left ankle six kilometers into the first one.

“I rested for an hour, took a painkiller and finished another race, which was eight kilometers, and then the next morning I took another painkiller and did another 31 kilometers,” he says. “And I finished in the top third, but I paid the price, because now I’m completely ruined for awhile.”

When it comes to coaching, it’s “do as I say, not as I do,” says Pepper. “I’m so bad. But there was no way I was going to go over there and bail after six kilometers.”

He’s also the kind of guy who’s not going to sit out an injury. Hence, the weighted vest and adjusted workouts. Side movements and racing are off the table for eight to 10 weeks.

“The physio said I did a good job,” he says, smiling.

The Spartan back story

Pepper is a marine engineer who used to work on ships and oil rigs and platforms. When a friend offered him a position as a fleet manager with an oil and gas company in 2014, he moved his family – daughter Charlotte is now 14 and he has a son Oliver, four – over to Abu Dhabi.

Pepper, who quit drinking seven years ago, thinks he took to racing outdoors after moving to the UAE because he missed getting out in northern England’s woods, mountains and greenery. The tattoo, the beard, the haircut – the endurance and the strength – showed up along the way.

“And because our fitness racing season is so small, every weekend I was doing a different race… anything I can do,” he says.

Pepper did his first Spartan event in Jebel Ali in 2016 – the 14-kilometer. He did three races that first year, 12 in 2017 and nine so far this year. It could be 12 if his ankle heals in time. He’s travelled far and wide to compete as a representative of the company, including the Philippines, Singapore, Romania, Scotland and Slovakia, where he raced in snow.

In addition to the Under Armour print campaign Pepper made a short video advert for the company and has done some other modeling, including shoots for Rake and Esquire Middle East.

On the fitness side, he led multiple sessions at this year’s Dubai Fitness Challenge – “It was well out of my comfort zone, but it was great” – and would love to eventually transition to working in the industry fulltime.

He already runs an early-morning, Spartan-style outdoor boot camp at Al Zeina, where there’s a lot of carrying and lifting, sandbags and runs.

He’d also like to do a marathon, be able to walk on his hands like all the other CrossFitters (he needs to get a handstand first) and – no surprise here – do a 26-mile Spartan Ultra and maybe a 24-hour endurance run.

As a recovering alcoholic, Pepper is aware that he’s likely substituted one obsessive behavior for another. (Don’t worry, he’s going to work on his “stuff” outside the gym, too.)