Menu
Tired of walking, running, cycling and playing in the park? Puppy Pilates and Yoga with your dog are exercise options in Dubai. 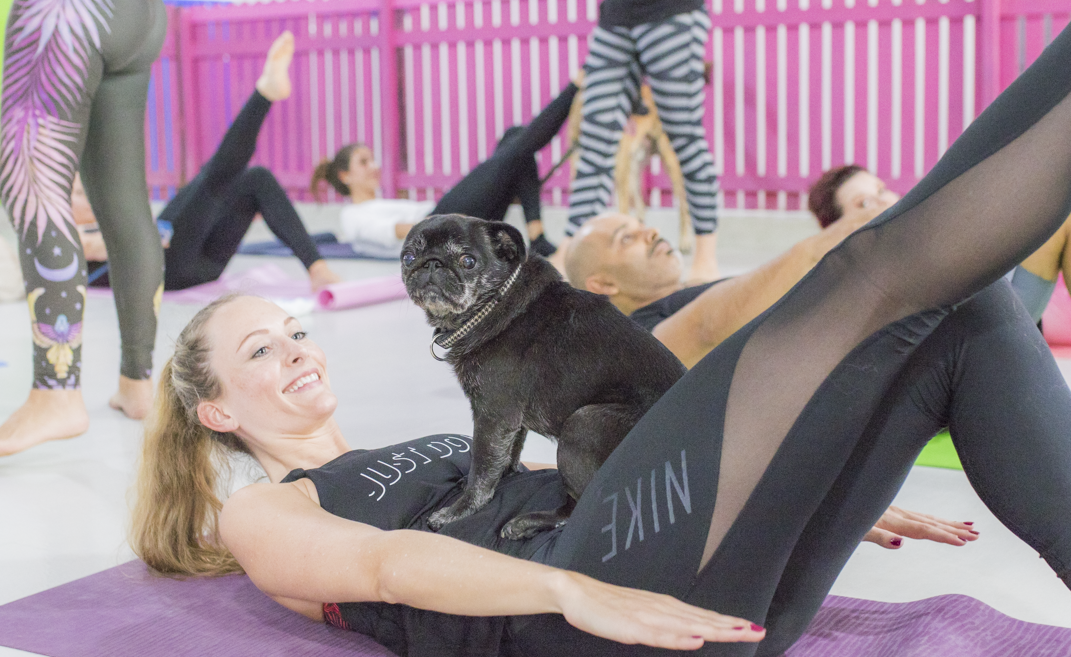 Having a dog is a great motivator to get moving. Not only do you not you want to let your canine down, skipping a walk could also mean having to buy new furniture or replacing the garden plants.

But lately pilates and yoga have been added to a list of options that includes walking, running, cycling and playing in the park.

Puppy Pilates launched in Dubai last year, while a new yoga class has just started at My Second Home, one of the world’s largest indoor dog runs, located in Dubai Investment Park 2.

What’s it really like to do an organized class with your dog? And do these sessions provide workouts to both animal and human?

I signed up with my playful six-month-old French bulldog cross, Wally, to find out.

The yoga classes at My Second Home are held in a separate section of the dog park, so your pup gets to run around with the other dogs while you stretch and breathe through the poses. Some dogs found the separation too much and sat at the fence watching their owners. Wally, a social butterfly, went off to make friends, leaving me to get down to the business of my first yoga class in more than a year.

Teacher Preeti Sharma dubbed the session a formation class, meaning it is suitable for beginners to intermediate.

I could hear Wally barking as he chased and played with the other hounds, and at times it was all I could do not to laugh at his antics.

While the class was a typical yoga session, the setting was anything but. Asanas were done to the soundtrack of barks, friendly growls and the clanking of dog collars, and instead of essential oils, there was a doggy aroma in the air.

It’s not for everyone and some will find the background noise hard to block out. But for anyone who regularly has to choose between exercising their dog and exercising themselves, it’s a win-win situation. And the best part is that it’s free for the rest of April. Bonus: your dog will be so tired from running around the dog park with his new friends that he’ll sleep all afternoon.

Sharma hopes to eventually be able to bring some of the quieter dogs into the class, so they can enjoy the calming energy too. For now, I think it’s best that my dog stays on the other side of the fence.

For dog owners who want to get more hands-on with their pets during the class, Puppy Pilates offers a solution. The classes are run by The Animal Agency and Phoenix Rising, taught by Kirsty MacPherson-Wright, and held at least once a month at Reform Social and Grill in The Lakes and Dogwalk in Al Quoz.

Puppy Pilates is like a traditional mat class with a lot of seated and lying-down poses that are great for involving the dogs, says MacPherson-Wright, but with a more playful atmosphere.

“The dogs may be sat on your lap or your tummy, or you have the option to challenge your core and lift them over your shoulders or head,” she says. “The classes are a chance for the dogs to socialise and have a playdate. Also, it’s a nice bonding time for you and your dog. Instead of you heading off to the gym and leaving your fur baby at home, you can exercise and get them involved in the movement.

“In some of the seated positions, you get a lot of eye contact, and with some of the slower movements there’s pet massage strokes that can be very relaxing.”

Obviously, if you’re lifting a dog over your head or shoulders, you’d rather it be a teacup Yorkie instead of a German shepherd, so the classes are restricted to small and medium-sized dogs only. They should also be socialized, comfortable around other dogs and able to obey your instructions.

“At the beginning of the class, when all the dogs are getting to know each other — all the sniffing and chasing around if we in an enclosed space — that’s the fun bit,” Kirsty says.

Sadly, the day Wally and I went for our first Puppy Pilates session it was rained out. Nevertheless, there was still a lot of chasing and sniffing (Wally’s antics, not mine) while we waited to see whether the rain would ease. I’m not sure the ever-energetic Wally would be too compliant in an organized class, but I’m keen to give him a go. Maybe all the eye contact and massage is just what he needs to calm down.

My Second Home’s yoga classes are held on Tuesdays at 9.30am, although if there is sufficient demand, a weekend class may be added. Follow @mysecondhomedubai on social media for information.