Menu
Many women are not aware that diastatis recti is a possible postnatal effect of pregnancy delivery, or that it can happen more easily in women who are fit, with strong abdominal muscles. Here is some sound advice from doctors, a women’s health physiotherapist and women who have been there. I opened my front door to find a massage therapist on my threshold, complete with a bag of essential oils and a portable massage table. “Happy... 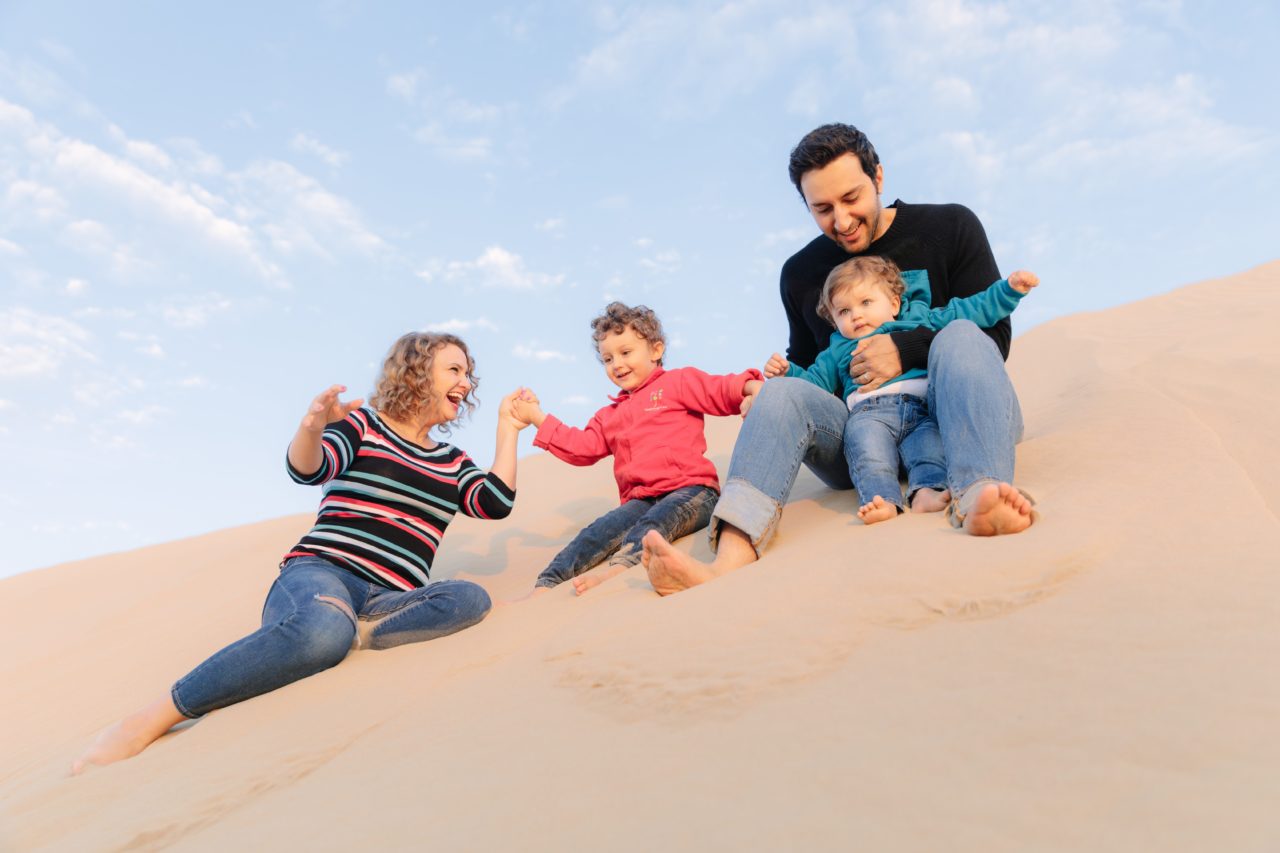 Dina Butti, media personality, and her family in Dubai

Many women are not aware that diastatis recti is a possible postnatal effect of pregnancy delivery, or that it can happen more easily in women who are fit, with strong abdominal muscles. Here is some sound advice from doctors, a women’s health physiotherapist and women who have been there.

I opened my front door to find a massage therapist on my threshold, complete with a bag of essential oils and a portable massage table.

“Happy Valentine’s Day, madam,” she said to me. “Your husband booked you a surprise at-home full body massage.”

Then she eyed me up and down for a moment, before resting her gaze somewhere around my midsection. She said matter of factly: “You are pregnant. You want a prenatal massage?”

I stared at her, perplexed. My second baby was born two years ago, and I had already lost all the baby weight. And yet here was a professional who had immediately assumed I was somewhere in my second trimester of pregnancy, just by glancing at my protruding tummy.

My only source of solace? I am not alone. A diastatis recti can be the main reason why a woman’s tummy does not return to its normal shape or size, even years post delivery.

Diastatis recti, or abdominal muscles separation, is a condition that occurs during pregnancy but is not diagnosed until after a woman gives birth, during the postpartum period.

Dr Rosalie Sant, a consultant in obstetrics and gynaecology at the Primavera Medical Centre in Dubai’s Healthcare City, usually explains it to her patients by describing how, during pregnancy, their belly’s vertical muscles are forced to separate to accommodate the growing uterus. These muscles “prefer to move or tear apart, rather than stretch, particularly if they are strong”, says Dr Sant.

It happens often in pregnancy, and particularly, she says, among more fit patients, although there is very little awareness among women that this is a common condition after giving birth.

Once this happens, torn ab muscles can make it especially hard to lose belly fat.

And if, like me, you’re also cursed with hernias that are a result of torn ab muscles, giving you even more of a pronounced belly, then no wonder a massage therapist assumes you pregnant.

Dina Butti is a presenter, emcee, voiceover artist and mother to two little boys living in Dubai. She has made a career out of working in media, as a presenter on Dubai TV, by collaborating with brands that fit her approach to motherhood and with weekly videos that parody motherhood on social media. By her own admission, she has often been asked if she’s pregnant again, even with her newborn son right there in her arms. Then there are the comments on her Instagram posts, asking her why it’s taking so long to lose the pregnancy belly.

“A couple of months after I delivered, I posted an image of me where I still looked six months pregnant,” says Butti, an Egyptian-Canadian. “A lot of people do that a few days after delivery but not two months after! I was flooded with messages from women who had felt too embarrassed to show their bodies because of the pressure to lose weight, so I kept doing that, even if I cried about some of the harsher messages I’d receive. I’d post a picture and say outright that I was asked if I was pregnant today. And it wasn’t just about the baby weight. It’s about the diastatis recti, which we have very little awareness about.”

While most women go the exercise and rehab route, with a larger-than-average diastatis recti of more than 5 centimetres — the average is usually around 2 — Butti was told by doctors that she would require surgery if she wanted to fix it.

After speaking to several plastic surgeons as well as general surgeons, working with physiotherapists, hiring a personal trainer to help her with tailored exercises and losing the weight she gained while pregnant, Butti has been able to reduce the gap, but not close it completely.

“I still haven’t figured out which option I’m going for to fix the diastatis recti and in the meantime, I am going to continue to work with a trainer to try to decrease my gap,” she explains.

Also raising awareness about the condition, for her, is a given.

“When I shared details about my ab separation on social media, I  got tons and tons of private messages, from women who could relate, who said they were embarrassed and horrified by their post-pregnancy belly, women who said they don’t want to go to the beach because of it, or can’t be intimate with their husbands, or say it affects them in so many different ways,” she says. “And I think part of it is because there’s so little awareness. They just never expected it, they don’t understand it.”

Dr Sant says it’s imperative to explain the condition to women so they do not inadvertently harm themselves further and end up increasing the gap.

“I advise women on how to get out of bed, stand up from a chair, pick up their child,” says Dr Sant. “Then I explain that they should use their abdominal muscles as little as possible in any other movements that they do and if they exercise, they have to do it right. Focus on lateral core exercises.”

A good physiotherapist can also help. Amy Gilbert is a women’s health physiotherapist who runs the Perfect Balance Rehabilitation Centre in Abu Dhabi and is a member of the livehealthy.ae expert panel. The majority of her clients, says Gilbert, are postpartum or prenatal women who come complaining of back pain or incontinence or pelvic issues.

One out of three tend to have a diastatis recti and that’s what’s causing the pain, she says.

“It’s very common and there are things you can do to prevent it from getting worse, and things you can do postnatally to help with recovery,” she explains. “Surgery is certainly not the only solution, it’s a last resort only when the separation is more than four or five fingers wide.”

For the average 2cm separation, a recovery can be made through assisted exercises under the guidance of a women’s health therapist and with some activity modification in the gym. As Dr Sant stressed, women have to be taught how to lift things properly, how to carry their children, how not to harm themselves further.

“It’s not that you can’t do it,” says Gilbert. “It’s that you have to make sure you are doing it correctly so you don’t do more damage.

Of course, there are risk factors that can contribute towards a higher prevalence of diastatis recti, or a wider gap than average. Multiple pregnancies, being frequently pregnant without much of a break, resuming an exercise regimen without proper guidance, or doing ab exercises incorrectly are all contributing factors, explains Dr Gowri Ramanathan, consultant obstetrician and gynaecologist, a specialist in fetal medicine and the chief medical officer for Women’s and Paediatrics at King’s College Hospital in Dubai.

“Being fit and athletic doesn’t prevent diastatis recti at all,” she says. “It’s a very, very common condition in postpartum women, and it’s surprising how little awareness there is around it. It causes women to feel depressed after pregnancy when they see they are left with a little pouch that seemingly won’t go away.”

Dr Ramanathan recommends seeking the help of a physiotherapist or certified trainer, insisting surgery should be a last resort.

In fact, new guidelines from the American College of Obstetricians and Gynecologists, a nonprofit organization of women’s health care physicians, recommend that every post-natal woman should see a women’s health physiotherapist as a first line of treatment.

“It’s a question of awareness,” says Gilbert. “With diastatis, there’s help there and changes that can be made, and it might take two or three or even six months, but that beats major reconstructive surgery that will require massive rehab.”

“I was told I can do nothing about the gap, but my perseverance helped me prove otherwise,” she says.

Featured photo Dina Butti and her family in Dubai/Dina Butti