Menu
Dana is a former gymnast who developed an eating disorder at age 13, which she says went hand-in-hand with overexercising.  “We would get weighed before competitions, so the older girls taught me how to throw up my dinner the night before a competition,” says the 41-year-old yoga teacher, who lives in Dubai. “But when vomiting became difficult, I figured I could purge the calories by running, climbing stairs or using the step machine instead. I would... 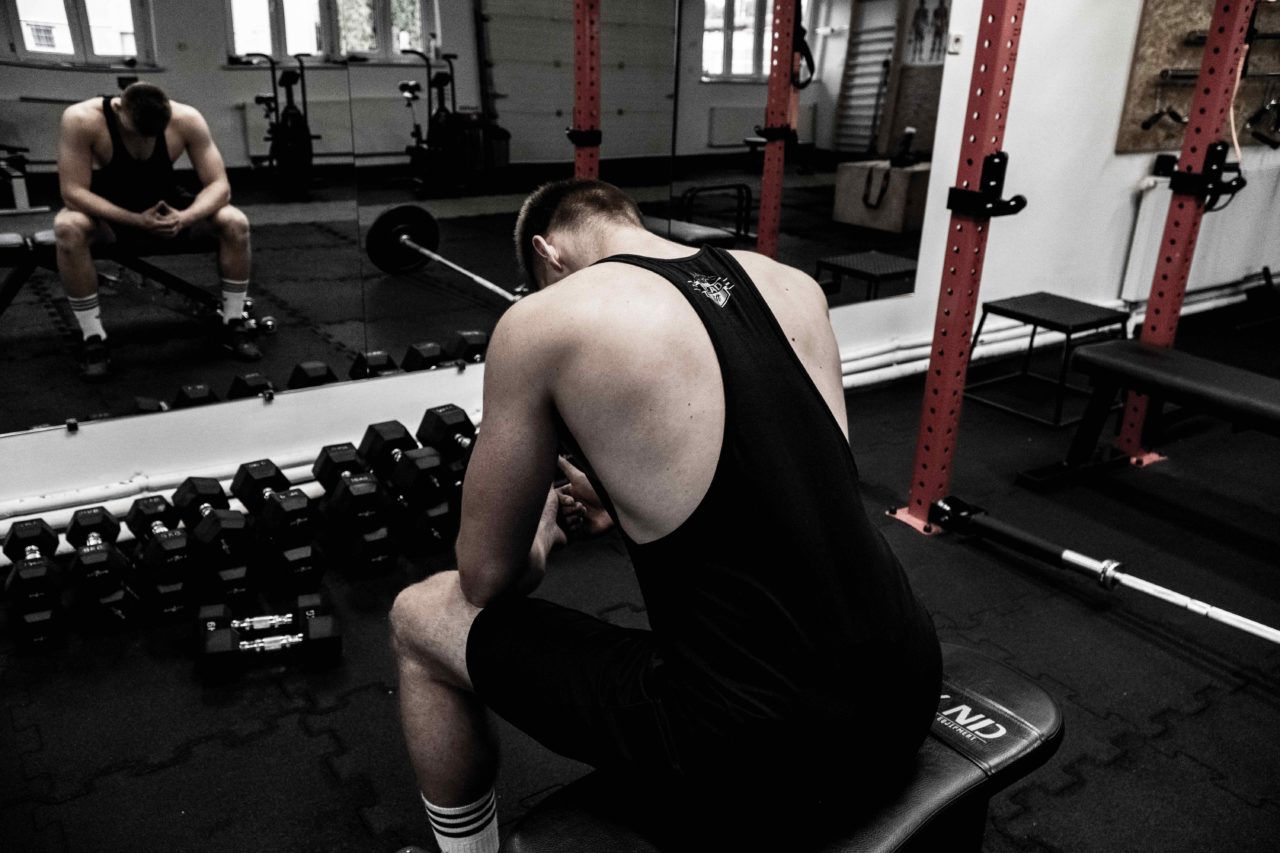 Dana is a former gymnast who developed an eating disorder at age 13, which she says went hand-in-hand with overexercising.

“We would get weighed before competitions, so the older girls taught me how to throw up my dinner the night before a competition,” says the 41-year-old yoga teacher, who lives in Dubai. “But when vomiting became difficult, I figured I could purge the calories by running, climbing stairs or using the step machine instead. I would run every day for at least two hours. Overexercising became my purge.”

Dana went on to become a spinning instructor and it was only when she underwent rehabilitation for the eating disorder years later that she was able to address her overexercising habits.

“I knew from the start that what I was doing regarding the eating disorder wasn’t normal, but I didn’t think the overexercising was a problem,” she says.

She was able to recover through a combination of psychotherapy, nutritional treatment and swapping running for yoga and meditation, but she fears for others she sees who are clearly struggling.

“Society doesn’t frown upon those who exercise or are trying to get fit,” says Dana. “It’s so easy to hide this sort of addiction under the fitness umbrella. I believe exercise addiction is on the increase in the UAE, and in this age of Instagram, the dangers are real.”

The problem of overexercising and exercise addiction is by no means restricted to athletes and sports enthusiasts. It also afflicts the general population, who use it as a way to avoid facing painful emotions, says Reem Shaheen, counseling psychologist and director of the BE Psychology Center for Emotional Wellbeing in Dubai.

“Exercise is a good habit, hence it is hard to detect that someone is using it to manage their feelings rather than to maintain a healthy lifestyle,” she explains.

Although there is little research in this region, studies suggest about 8.2 percent of regular gym-goers are at high risk of exercise addiction, says Shaheen. Global figures suggest 25 percent of people who run avidly are at risk of becoming addicted, a number that jumps to 50 percent when it comes to marathon runners placed in this category, she says.

Dr Lawrence Lear sees the physical and emotional impact of overexercising regularly in both athletes and regular gym goers at UPANDRUNNING Sports Medicine Clinic in Dubai, where he is medical director.

“Normally we expect to see cardiovascular changes in healthy athletes as fitness improves with an enlargement of the heart and a lower resting heart rate,” he says. “However in overexercise, we see deteriorating performance and raised resting heart rate. We also start to see weight loss, poor sleep, cessation of periods, reduced immunity and susceptibility to viruses and longer term bone density issues and stress fractures and occasionally nutritional deficiencies.”

There are many elements that can trigger someone to go too far when it comes to exercise, including natural competitiveness and “a desire to be as good as one can be” combined with a loss of perspective along the way, says Dr Lear.

Other triggers can include poor coaching, parental pressure and in some societies, “coercive sporting regimes with perverse incentives”.

“In some individuals, I think it can be related to obsessive personality traits and in others a manifestation of an eating disorder or latent psychiatric issues,” he explains. “However the trigger is often a steep training curve or increase in competition and the resulting burnout can also coincide with exams, increased work pressure or a life event.”

Dr Lear also names one further at-risk group: “There appears to be an older generation of athlete who perhaps has taken up exercise later in life and in a furious attempt to deny ‘old father time’ seeks immortality by pursuing ever more daunting triathlons or Ironman competitions.”

So how can you tell if you or someone you know is experiencing exercise addiction — and at risk of physical harm? Although overexercising is not listed in the Diagnostic and Statistical Manual of Mental Disorders, it can be classed as a behavioral addiction when it becomes obsessive and/or compulsive and begins to negatively impact a person’s life or relationships.

Professionals are using a new inventory to assess patients, explains Shaheen, one that includes “carrying out an unreasonable level of sustained exercise, exercising through injuries or illness, needing more and more exercise or escalating levels of intensity, not taking rest days and continuing a vigorous workout schedule despite negative consequences to relationships and work or school responsibilities”.

Sometimes labelled as anorexia athletica or obligatory exercise, some use their addiction to deal with depression, despair, or feelings of helplessness. It could also be centered around a need to release dopamine and endorphins – the so-called ‘happy hormones,’ which bring on a feeling of elation and general happy mood, explains Shaheen.

“Some people get addicted to the release of those hormones and overexercise to consistently feel the effects,” she says. “These effects range from merely managing anxiety to reducing anger, depression and boredom.”

There are tell-tale signs that exercise-enthusiasts have crossed over from a healthy dedication to their training into exercise addiction, says Tom Walker, a coach at InnerFight Endurance.

“They use words like ‘must’, ‘have to’ or ‘I should’,” he says. “I see these terms as ‘hostage’ words, where they feel they are at the mercy of exercise and if they don’t exercise it ruins the day.”

“They are not thinking pragmatically about their future in exercise,” he says. “They are only thinking about the now and what they want in the immediate time frame, which is very much associated with any form of addiction.”

Walker, who is the first to promote the benefits of exercise on overall health, sees overexercising as causing  not only physical problems including injuries, chronic fatigue, vitamin deficiencies and cardiac abnormalities, but having a big emotional impact too.

“A common term used for this is burnout,” explains Walker. “This is when athletes experience depression-type symptoms such as low mood, low motivation, mood swings, lethargy, isolation and negative thoughts.”

There are three ways exercise can change the body’s chemical balance, leading to an addiction. The thermogenic hypothesis suggests that exercise not only increases body temperature but also the temperature in certain parts of the brain, a process that helps reduce anxiety. There are the catecholamines released during exercise, which are thought to play a part in controlling mood and the body’s stress response. And then there are endorphins, the body’s naturally-produced opiates that are boosted by regular high-intensity exercise. This hypothesis suggests that continued exercise becomes essential to maintain the natural balance in the brain. A research study on rats put through extreme exercise also suggested a similar impact on the chemical neurotransmitter dopamine, which is linked to feelings of reward.

But hormones are not the only factor tipping the balance from healthy pursuit to addiction. A number of studies have linked exercise dependence with body dissatisfaction, leading to disorders such as exercise bulimia, where binge-eating sessions are followed by high-intensity exercise rather than vomiting, or body dysmorphia, in which the person is constantly trying to achieve the perfect body. One form of this can be bigorexia, or the obsession with gaining muscle size.

A 2014 study into disordered eating and exercise among female Emirati students in the UAE found that 31.4 percent of the participants showed disordered eating attitudes, with a membership to a health club being significantly related. Laxative use, over-the-counter supplements, and exercising for more than 60 minutes to control weight was common. Participants indicated that they would miss social events to exercise, and reported withdrawal symptoms such as irritability if they were unable to exercise.

Louisa Kiernander, hypnotherapist and psychotherapist at Mind Solutions in Dubai, explains the mind-body connection that drives an exerciser to take their workouts too far.

“Although some people are addicted to the pheromones and positive feeling of exercising, others are addicted to the thought or feeling of being in control of their body shape and how they look,” she explains. “It could be a symptom of body dysmorphia, or the last lingering strands of a previous eating disorder, or the visible warning flag of a deep-rooted self-esteem issue.”

People working in the fitness industry are particularly vulnerable.

“I think it is well-known that many fitness instructors have dealt with eating disorders and body dysmorphia issues in their past, eventually channeling the discomfort of being in their own skin into obsessively exercising in order to maintain a sense of control over their weight,” she explains. “On the outside, it may seem as if they have beaten their eating disorder. But they may have simply redirected that abuse of the body and obsessive control over food and weight into an activity or lifestyle that appears on the outside to be healthy.”

The is also a direct link between the increased use of technology, including fitness trackers and social media, and the rise of exercise addiction, according to research by performance psychology consultancy Performance in Mind.

It’s a correlation Lee Ryan, captain of adidas Runners Dubai and Abu Dhabi, has seen through his work.

“The mental abuse that people give themselves to always be better, stronger, better looking can be as extreme as causing people to commit suicide,” he explains. “The social media filters, Photoshop and airbrushing can give an impossible and unrealistic goal for many. When they can’t reach those goals, the mental strain can be deadly. They want to be the best but the picture of what society depicts as the best is false, leading to steroid use or eating disorders to try and cut corners to reach the impossible.

“In this day and age you can’t overlook the impact of social media on people and how they want to be seen and accepted by everyone else. Too many times I see people trying to uphold an image for people they don’t even know and will never meet – doing it all for a ‘like’.”

Anyone struggling should seek help from a professional, says Ryan, who advises healthy levels of exercise are three to four hours a week of activity. As someone who used fitness to cope with bereavement after losing his son and mother, Ryan stresses it is important not to become fearful of exercise altogether and to remember how healing it can be.

“Exercise has been proven to relieve stress and anxiety; the movement and expression gives the mind and body an outlet to find positivity,” he explains. “People play sports to find calm and a release. This is a good thing.”

Why obesity and debt go hand-in-hand

7 new livehealthy things to do