Menu
Many landfills are either an environmental disaster waiting to happen or already stressed to the point of crisis. 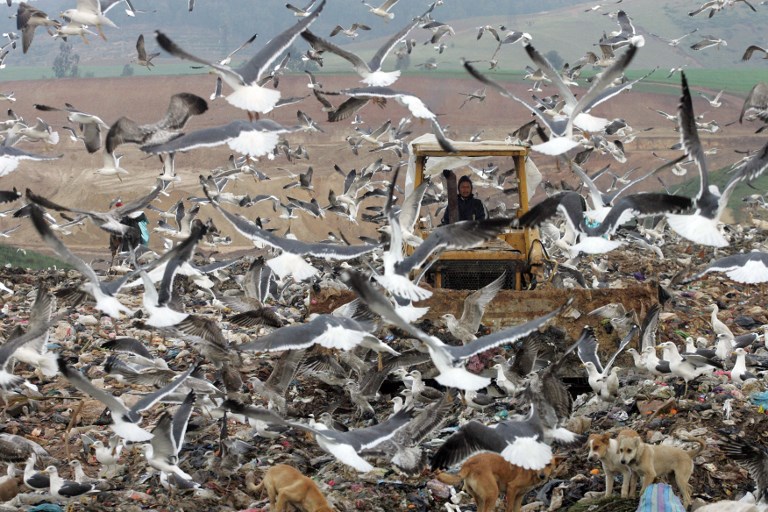 As seagulls fly over, an excavation vehicle removes refuse in the Oulja rubbish dump, near Rabat, 03 February 2007. Some 550 tons of waste have been tossed daily over that area but it will soon be closed as part of a cleaning up plan all along the Bouregreg valley to turn the premises into a USD 2.75 billion project in partnership with United Arab Emirates (UAE) companies to develop a tourist resort on both sides of the Bouregreg estuary. AFP PHOTO ABDELHAK SENNA / AFP PHOTO / ABDELHAK SENNA

Garbage is a problem the world over. But in the Middle East, it can be one of crisis proportion. Here, we produce too much waste and we rely too greatly on landfills to dispose of it. To make matters worse, many landfills are either an environmental disaster waiting to happen or already stressed to the point of crisis. While there are initiatives in a few places to tackle the issue before it becomes unmanageable, the ultimate solution to the waste disposal problem does not so much lie in managing landfills, but in reducing the demand for disposal sites. Are businesses and residents ready for this?

Landfills in this part of the world are, for the most part, just poorly constructed dumps. They lack environmental safeguards required by law in developed economies and many middle-income nations. Such requirements include a bottom liner that prevents the waste from contaminating the underlying soil, or a mechanism to collect and treat “leachate,” whether it’s the liquid dripping from decomposing food, for example, or substances that are much more hazardous. And although it’s standard practice in developed economies, rarely here is there a system in place to collect the methane that landfills produce – which is many times more harmful to the environment than carbon dioxide – much less convert it to energy.

The most alarming example of a garbage crisis is to be found in Lebanon, where about 900 existing dump locations are filled to bursting – and festering. The crisis came to head in 2015 when the country’s main landfill passed its expiration date, prompting mass demonstrations under the banner “You Stink” and resulting in military deployment. This year, a winter storm regurgitated a carpet of rubbish onto the beach in one community, causing much embarrassment and proving nothing had really changed. The reasons behind the problem are varied, but the stench of garbage is palpable from the moment visitors arrive at Beirut airport, and it’s not going away any time soon.

On the opposite end of the spectrum, the UAE has made major strides to catch up with the rest of the world. By 2030, Abu Dhabi plans to divert 80 percent of its waste from landfill – from 30 per cent currently – to recycling plants; Dubai has set the start of Expo 2020 as a target date for the completion of a nearly $700 million waste-to-energy plant that will convert solid waste into enough electricity for more than 100,000 homes.

Additionally, there are methane-capture projects underway at landfills in Ras Al Khaimah and in Dubai. Meanwhile, Abu Dhabi plans to capture methane produced at one landfill and convert it into electricity. That electricity will power a new plant that will process 40,000 liters of cooking oil per day destined for landfills from restaurants, and recycle it into biodiesel. It will also power a new incinerator for the thousands of tonnes of medical and hazardous waste produced every year. The scheme hinges on industry investment, sales and fees, so there is no cost to the government.

Sitting somewhere in the middle of Lebanon’s disastrous situation and the goals of the UAE, is Oman. Since 2006, the country has closed 300,000 dumpsites across the country and replaced them with eight landfills, with two more on the way. Among other initiatives, the country plans to convert waste to steam and has launched five sorting facilities that last year recycled 10 per cent of the 2 million tonnes of municipal waste produced.

Yet despite these efforts, the source of the problem shows no signs of abating and the region remains among the highest waste generators in the world. In Kuwait, for example, there are 18 landfills, four still working. None was engineered to protect the environment. And not much is being planned in the future for those landfills either, despite the public health and environmental issues they create that include dangerous emissions and fires caused by flareups. The country’s per capita waste generation remains one of the highest in the world.

Stephan Singer, an advisor on renewable energy at the Beirut-based Climate Action Network, argues that energy-generation projects that rely on waste do not constitute a renewable or clean-energy program. “You are building your supply to some extent on the further generation and reliance on garbage,” he explains. “The overall priority should be to reduce the waste, recycle it and avoid it as much as possible.”

All the efforts underway to deal with the steady, unrelenting flow of garbage throughout the region are ambitious, and sometimes even admirable – if a bit late in the game. But much more needs to be done to tackle the bigger issue, which is the unchecked habit of producing far too much waste per person, not to mention business and industry. Whether it’s leftover food from the latest feast or from never-ending construction and demolition around the region, the focus needs to move away from landfills and toward finding ways to reduce the amount of garbage produced. That, however, would involve pressuring industry and individuals to take responsibility for cutting down on what they produce in ways that are accepted in the developed world: fines, for example, for individuals and companies failing to recycle to government-mandated standards.

However, these are measures governments, not to mention people living and working in this part of the world, may simply not be ready for.

#thinkpiece: What is the obsession with celery juice?