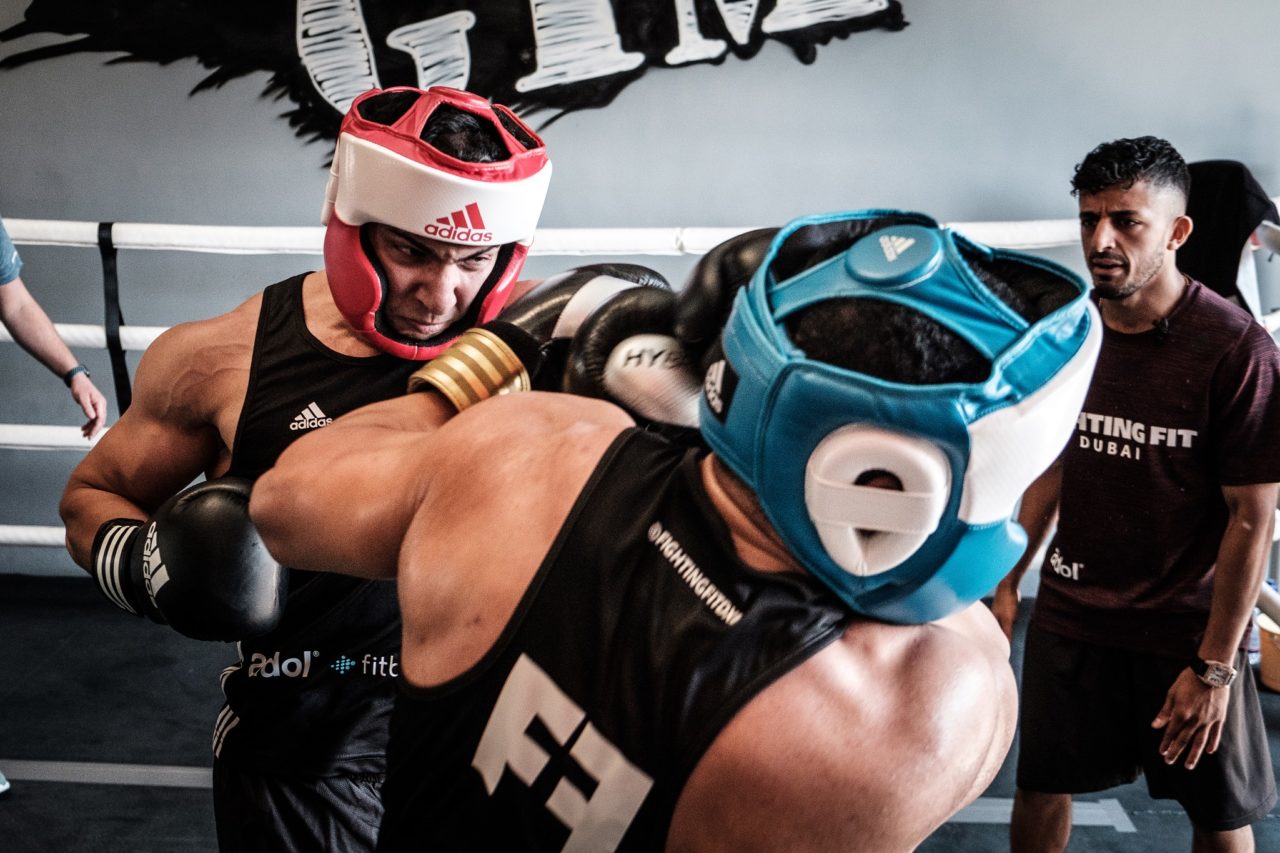 A trainer at Dubai’s Real Boxing Only gym and professional fighter, Waleed Din is currently coaching contestants on the reality TV show Fighting Fit Dubai on ESPN. It has been an eye-opening experience, one that wraps up Friday with the show’s finale.

Waleed Din was 16 when he first pulled on a pair of boxing gloves. His father, a taxi driver in the northern English city of Sheffield, loved the sport and used it to keep fit. One day he convinced Waleed to join him at the local boxing club and he has never looked back.

“I went to a school with a lot of British Asians so we played a lot of cricket – that was all I knew growing up,” he says. “It was my dad who suggested I try boxing and I remember on my first day I had eight and nine-year-olds teaching me.

“I was 16 and thought I was the man but they were teaching me footwork and I was shocked at how good they were. I stuck to it from there, kept fighting. And now here I am, a professional boxer.”

Din turned professional at 22 and his record currently stands at 10 wins (six by KO) and one loss. Two years ago he moved to Dubai and between preparing for his own fights, he trains other boxers at the Real Boxing Only gym in Al Quoz. It is a facility modeled on the gritty, traditional boxing clubs found in the shadows of most British towns.

A charismatic and straight-talking northerner, it is not a surprise that Din was asked by producers to be a coach on the UAE-based reality TV show Fighting Fit Dubai. The programme, now in its third season, follows the fortunes of a group of plucky UAE residents attempting to go from couch potatoes to boxers in just six weeks — culminating in a glamorous fight night at Zabeel House in The Greens.

And with the end in sight for his six fighters, Din admits that his first experience of training white collar boxers has been full of surprises.

“When I was first asked about Fighting Fit Dubai I thought we’d be taking people at a reasonable standard who would know what they’re doing. Then when the contestants started coming through in the trials I thought ‘oh my god, they don’t know which is their left leg and which is their right leg’. I knew then it would be difficult but it’s been great to see them improve.

“This is not a boxing show really, it’s a reality TV show. But seeing these people leaving the gym with a smile on their face, feeling better about themselves, losing weight, it is incredibly rewarding. They are physically different people and mentally different people.”

The Fighting Fit Dubai contestants represent a wide range of ages, sizes and backgrounds — with their journeys embodying those of many people who take up boxing later in life.

“There is no age limit to when you can start boxing — it is never too late. On Fighting Fit Dubai we have people over 30, some people are in their mid-40s. It’s a mental challenge more than anything.

“Mentally they never thought they would be able to do it but you speak to them now and they feel like their life has changed because of boxing. That’s in just five weeks. They’ve been building confidence and it’s been amazing to see. It’s very inspiring for me and the other coaches.”

Having been a professional boxer, Din understands what his boxers are going through when he stands in their corner. But he insists it is his personality, rather than experience, that makes him a successful coach.

“I always feel very emotionally invested in the people I train, whether I’ve trained them for a week or two years. As long as you give me 100 percent I’ll give you 200 percent — that’s all I want. There is nothing more rewarding than seeing people improve and change their lives.”

Not everyone sees a fight as an end goal, with many who participate in recreational boxing focusing on the fitness benefits. Din says Real Boxing Only gym is an effective entry point to the sport and reassures those keen to try it out that they won’t be thrown in at the deep end like the Fighting Fit Dubai contestants.

“You can take up boxing without having to fight. Fighting is the last part that you only do if you want to. Some people come here to train and never step in the ring and that is absolutely fine. We never just throw people in, they have to feel ready.

“There is still so much you can learn about yourself by hitting a bag or hitting some pads and just being in the gym environment. Fighting is not for everyone.”

Din grew up watching fellow British Pakistani Amir Khan and local, Sheffield-born hero ‘Prince’ Naseem Hamed (both former world champions). Having been inspired by their exploits, he suggests that the emergence of local heroes in the UAE could really help the popularity of the sport in the emirates.

“I think many Emirati families see boxing as a violent sport but that is slowly changing. I’m training a 15-year-old Emirati kid at the moment and honestly I’ve seen nothing like him. We’ve been together seven months; he listens and he trains hard.

“Some of the stuff he is pulling off in sparring and training is seriously impressive. He’s one to look out for in the future. His family are supportive and he turns up every day. Always watching videos of fights, always asking questions.

“Whether it’s him or someone else, an Emirati or another Arab fighter, boxing role models are really important. Giving youngsters someone to look up to – this will really help people get a feel for boxing in the UAE.”

Babywearing 101: From carriers to wraps