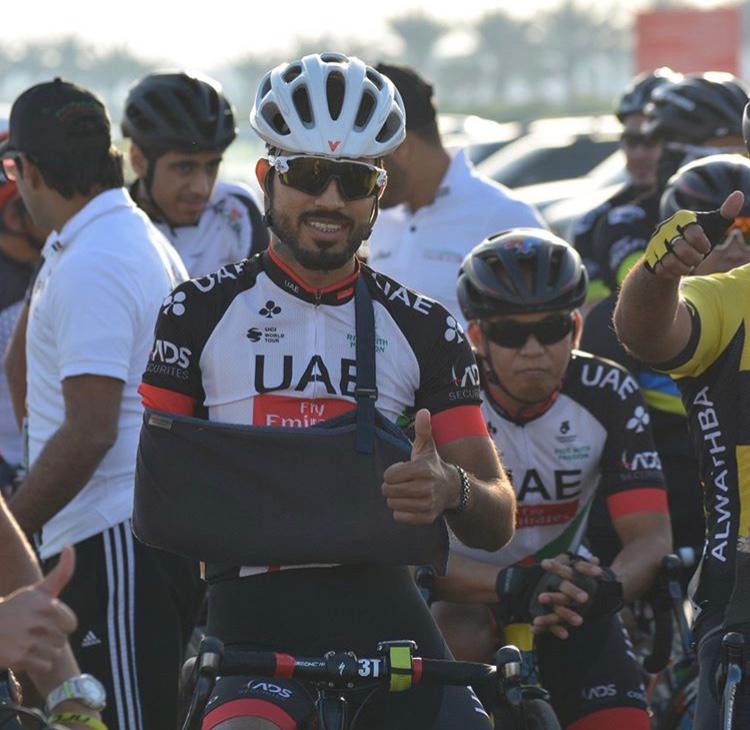 Seven years ago, it did not look as though Emirati cyclist Abdullah Salem al Blooshi was heading for sporting success.

The Emirati cyclist, whose love for the sport began as a young boy, was 20 when he suffered a devastating injury when he severely injured his right arm after colliding with a road sign during training.

After more than 30 surgeries, in the UAE and with specialists in Germany, al Blooshi did not regain the use of his right arm.

But the life-changing accident hasn’t stopped him from pursuing a life in competitive athletics.

With the Summer Paralympic Games just over a year away, athletes from around the world will be training in earnest to take up their places on national teams — and Al Blooshi will be among them.

He was just 12 when he began cycling at Dubai’s Al Ahli Club in 2004. A year later al Blooshi won his first team medal, and two years after that, he was representing the UAE on the national team.

His winning streak continued with a series of international achievements, including a bronze medal in the team time trial at the 2009 Arabian Championship. That same year he became the first Emirati cyclist to compete in the Asian Championship, held in the UAE the same year.

Moving into the elite category in 2010, he seemed on course for stardom in the cycling world.

His accident two years later almost shattered that dream, but al Blooshi was unwavering in his ambitions.

A cyclist who wants to win, he explains, must have tenacity and determination.

“It is a sport that depends on the individual,” he says. “It is a one man sport and it is a competitive. And I love the competition.”

At first he cycled out of love for the sport that he had embraced from his teenage years into adulthood. Soon, encouraged by his friend and now-coach Mohammed Al Murawwi, al Blooshi entered the racing arena again.

His first competition was the Nad al Sheba race, in the determination category — where he took first place. Collecting his gold medal, al Blooshi knew he still had a bright future on the international cycling circuit.

“I thanked God that I was able to get back on track and fulfil my dream,” he says. “I found a great opportunity and I knew I was back for the races.”

Since then, al Blooshi has raced in Paralympic competitions all over the world, and is now part of the UAE Paralympic national team. Alongside his teammates, al Blooshi is now training in earnest and traveling to international competitions to qualify for the 16th edition of the Summer Paralympics, to be held in Tokyo, Japan from August 25 to September 6, 2020. About 4400 athletes are expected to compete in 540 events in 22 sports during the event.

“My goal is to just to work hard and never give up and just compete normally,” says al Blooshi.

His most recent achievement came in the form of a bronze medal at the Asian Championship in Uzbekistan in April. His personal trainer Joe Watters, inspired by his client, is keen to share his story to motivate others.

“Not many people could come back from an injury so severe; it’s a challenge mentally as much as physically,” says Watters. “Abdullah hasn’t let it stop him from training hard and believing in himself, and it’s shown in his achievements since the accident. Hopefully this will inspire others and show people that, if you have the motivation, you can triumph over adversity.”

As for what message he would give to anyone who has been badly injured, al Blooshi says the physical aspects of rehabilitation and training are highly individual.

“Most importantly, in order to recover you need to get back to exercise and so hardcore work-outs such as lifting, and cardio such as running or swimming,” he says. “It all depends on your injury.”

As for that all important mental game, he advises: “First and foremost, remember nothing is impossible. You are able to face your fears and just live a normal life.”

Isn't it about time for a zero waste iftar?