Menu
The dust may have settled on the 2020 Tokyo Olympic Games but those craving more motivation and inspiration do not have to wait long. On Tuesday August 24 2021, the 2020 Paralympics begins with its own roster of remarkable athletes, many of whom have overcome significant adversity to compete.  On the back of a record-breaking Olympics for the Middle East and North Africa, the region once again has a host of medal hopefuls for the... 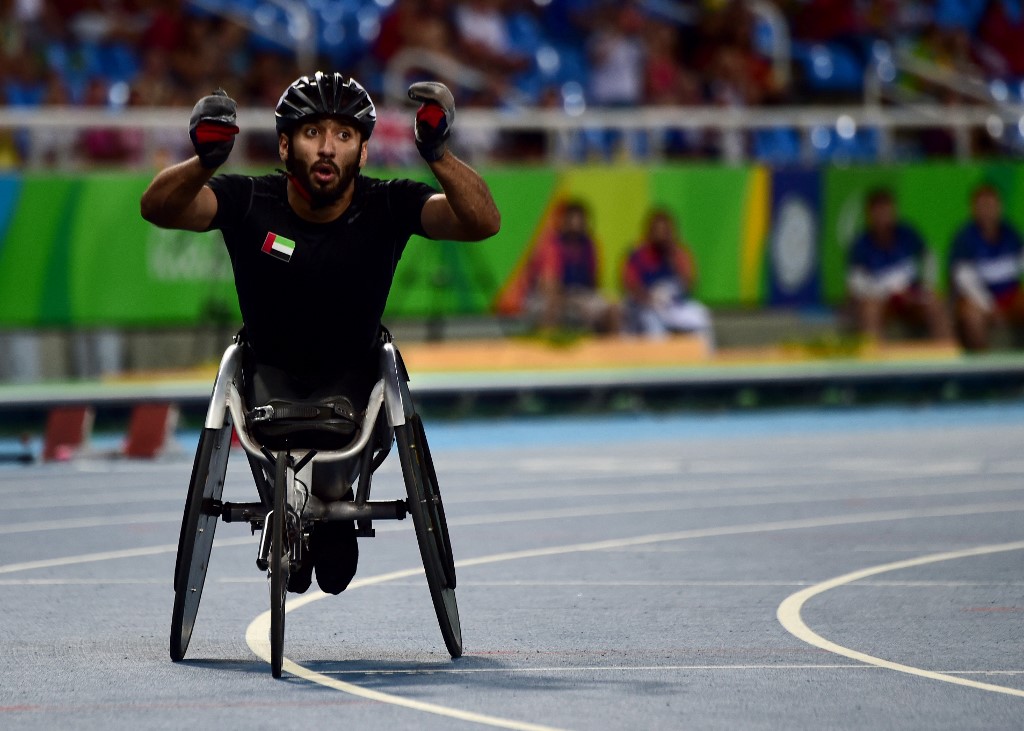 The dust may have settled on the 2020 Tokyo Olympic Games but those craving more motivation and inspiration do not have to wait long. On Tuesday August 24 2021, the 2020 Paralympics begins with its own roster of remarkable athletes, many of whom have overcome significant adversity to compete.

On the back of a record-breaking Olympics for the Middle East and North Africa, the region once again has a host of medal hopefuls for the Paralympics. Here, LiveHealthy highlights some of MENA’s best prospects for success in Tokyo.

One of the finest wheelchair athletes of the past decade, Al Hammadi has previously won three Paralympic medals, most notably a sensational gold at the last Games in Rio. He came from behind on the final straight to edge past Tunisian world record holder Walid Ktila in the Men’s 800m T34 category, setting a new Paralympic record in the process.

Al Hammadi, who has impaired muscle power in both legs after contracting polio as a boy, also won gold at the 2019 World Para Athletics Championships in Dubai, as well as silver in the 400m and bronze in the 100m. Having first taken up athletics in 2003 at the Al Thiqah Club for the Impaired in Sharjah, Al Hammadi has certainly come a long way, carving out a glittering athletics career.

The Emirati memorably gave the four medals he won at the 2017 World Championships in London to the children of Abdullah Hayayei, a compatriot and teammate who died just before the start of the competition. Al Hammadi said of the tragedy at the time: “Abdullah was not just an athlete but also a friend of all of us. Before the championships, Abdullah had renovated his house and had Tokyo 2020 put on all of the windows. He wanted that to motivate him. Now I am going to go to Tokyo and represent Abdullah. If I win a medal, I will devote it to him.”

Nicknamed Qaeed (leader) for good reason, Alhammadi was the UAE’s flag bearer in Rio and is arguably the country’s best medal hope in Tokyo. Check him out in the Rio 2016 final.

The reigning Paralympic champion is back to defend his title as part of an 18-strong Iraq team across five sports. Tnaisah, a two-time world champion and world record holder, is expected to face off against Denis Gnezdilov for Tokyo gold. The Russian beat him at the 2019 World Para Athletics Championships in Dubai, so a close contest is anticipated.

“I have prepared well and hope to get a good result,” Tnaiash recently said in an interview. “However, there has been a lot of pressure due to COVID-19 pandemic. I hope I can compete to my expectation.”

Elsewhere in the Iraq team, two athletes are hoping to go one step better than Rio, with fencer Ammar Ali and powerlifter Rassol Mohsin both looking to build on their silver medal, while javelin thrower Wildan Nukhailawi and powerlifter Faris Al Aljeeli could also contend. At just 14 years old, Fatimah Suwaed will become the youngest ever Iraqi Paralympian when she competes in the women’s 100m and 200m T35 events in Tokyo.

After winning a thrilling gold medal in the 100m T33 final in 2016, Al-Mutairi is gunning for a Paralympic double. The 27-year-old, who has partial paraplegia in his legs as a result of cerebral palsy, was originally a wheelchair basketball player and played in the Kuwaiti team that won gold at the West Asian championships before switching to sprinting. As the defending 100m Paralympic champion, world record holder and a three-time world champion, Al Mutairi looks to be Kuwait’s best prospect of gold in Tokyo.

Omar is quite simply a powerlifting superstar. The four-time Paralympic gold medalist and four-time world champion is a legend of her sport and is hungry for what would be her fifth and final gold in Tokyo. The 47-year-old veteran has been competing since 1997 and announced last year that Tokyo will be her “last step” in powerlifting. “I have managed to achieve all of my dreams and more in this sport,” she said.

There is an added incentive for Omar as she was beaten to Paralympic gold for the only time in her career five years ago in Rio by long-time Nigerian rival Lucy Ejike. This time Omar will avoid her old nemesis as she has gone up a weight class to 67kg as she pursuses a fifth Paralympic title. Omar, who has described how watching the 1996 Paralympics in Atlanta inspired her to start lifting,  has in turn been an inspiration for many of her current team-mates.

World record holder in the powerlifting 59kg category, Sherif is chasing an astonishing fourth successive Paralympic gold in Tokyo. The 38-year-old has dominated his weight class for more than a decade and set his current world record on the way to gold at the 2016 Paralympics, lifting 211kg – almost four times his body weight.

Othman, who contracted polio at the age of nine, began lifting after being encouraged by Egypt’s first ever Paralympic powerlifting medalist, Said Abd El Hafez. “Being born with a disability in a small village in Egypt is not an easy thing,” Othman said. “I saw a lot of pity and difficulties so I wanted to change this and make myself and my family proud. I wanted to send a message to the world that I can do anything I want.”

Othman and Omar are just two of a number of MENA athletes expected to compete for top honours in powerlifting, with compatriot Randa Mahmoud looking to defend her 86kg title from Rio, while UAE’s 2004 and 2016 gold medallist Mohammed Khamis Khalaf returns in the 88kg category. Jordan’s Jamil Elshebli, who previously won two Paralympic silvers in shot put before switching to powerlifting ahead of the Rio Games, is looking to upgrade from his 107kg bronze five years ago.

Iran will send one of the biggest delegations to the 2020 Paralympics with nearly 100 athletes lined up to compete and having finished a hugely respectable 15th in the 2016 medal table with eight golds and 24 medals in total, Iran have high hopes across a number of sports.

Paralympic icon Zahra Nemati returns as a flag-bearer having made history in 2016 by becoming the first Iranian to compete in both the Olympics and Paralympics. The shooter is one of only 15 athletes to have ever participated in both Games and the only one from Asia. While she fell short in the Olympics, Nemati won a Paralympic gold and silver in the Women’s individual recurve and Team recurve respectively in Rio.

Nemati, who was a black belt in taekwondo before suffering a spinal cord injury when she was at university, also has gold and bronze medals from the London Paralympics in her collection and is expected to challenge again in Tokyo along with Iranian shooter Sareh Javanmardi, who was a gold medalist in both the Women’s 10m Air Pistol and Mixed 50m pistol events five years ago.

“Representing as a Paralympian sent an essential message to the world,” Nemati said. “That’s an important message that a Paralympian can qualify for Olympics to compete with elite [able-bodied] athletes and also act as a flag bearer for the country… I ask all people with disabilities; never surrender in your disability. Be informed that sport is one of the best ways to overcome disability.”

One can’t talk about the Paralympics without mentioning Iran’s record-breaking sitting volleyball team. While the personnel may have changed over the years, Iran have ruled the roost unopposed in the sport for years — winning gold at each of the past six Paralympic Games.

Back to target a seventh this year, the Iranian team is led again by Morteza Mehrzadselakjani, who at 8 foot 1 is, unsurprisingly, the tallest athlete to have competed in the Paralympics. Mehrzadselakjani has acromegaly, a condition stemming from excessive growth hormone.

“Before joining the sport, I was an isolated person,” Mehrzadselakjani said ahead of this year’s Paralympics. “In the past, I could never imagine such a future for myself.” “But sitting volleyball changed my life. For this reason, I call sitting volleyball a miracle in my life.”

Bahrain is set to field just two athletes at this year’s Paralympics but discus thrower Rooba Alomari and javelin thrower Ahmed Meshaima could both challenge for medals in Tokyo. In Rio there was a historic gold for Fatema Nedham, who became the first Bahraini female Paralympic champion, but the veteran shot-putter is not competing this time around.

Still, Alomari, who took up Para athletics in 2012 through the Bahrain Sports Federation for Disabilities and finished seventh at the 2016 Games, is hoping to emulate her compatriot by claiming a Paralympic medal in the F55 discus event. The basketball enthusiast will need to be at her best against a tough field, but Bahrain Paralympic Committee secretary general Ali Al Majed recently insisted she can compete, saying: “We have faith in both our Para athletes and with God’s will, both will bring a medal home.”

Up until a few days ago, Zakia Khudadadi has been on course to make history as Afghanistan’s first ever female Paralympian. Sadly, due to the current turmoil in the country, Khudadadi’s hopes have been dashed, along with team-mate, discus thrower Hossain Rasouli, who will also no longer be competing in Tokyo.

Afghanistan’s chef de mission Arian Sadiqi told Reuters this week how upset the athletes were and outlined his fears for future participation, saying: “This was history in the making. Zakia was very passionate to compete and would have been a great role model for the rest of the females in the country… Previously during the Taliban era people couldn’t compete, couldn’t participate, especially female athletes. For me, it’s heartbreaking.”

Covid to HPV: Everything you need to know about child vaccinations

How to help children mentally prepare for school