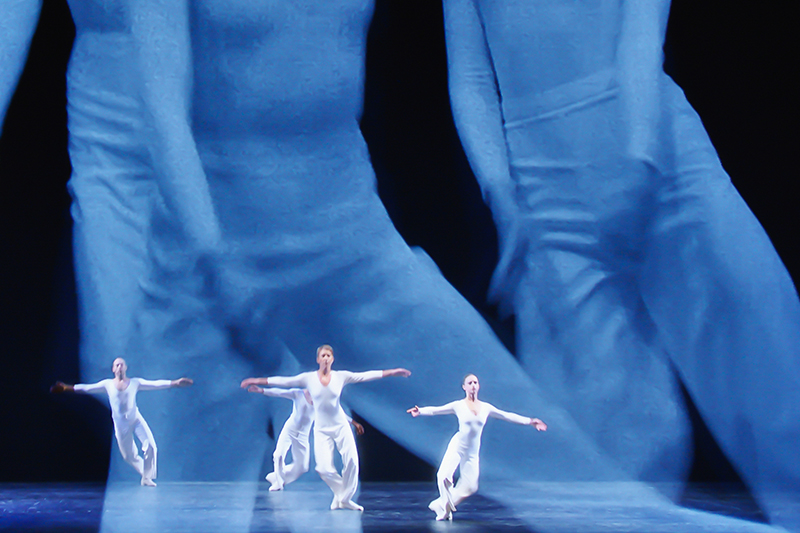 NYU Abu Dhabi’s Art Center opened its new season this week with the Gulf premiere of a show on which the curtain rises for the final time after a 10-year run: the revival production of Lucinda Childs Dance Company‘s Dance. The irony of Dance‘s beginning and end may have contributed to the buzz surrounding the production, but there is well more to the excitement about the show.

Dance is a collaboration between three towering figures in modern American art and culture. Each of them has been responsible for changing the landscape of his or her respective field: choreographer Lucinda Childs, composer Philip Glass and conceptual artist Sol LeWitt.

As the show begins, a scrim screen separates the audience from the stage. This would be the medium through which LeWitt’s contribution is presented. A conceptual artist who died in 2007,  he is known for his sculptural work with cubes (which he preferred to call “structures”) and for his geometric two-dimensional compositions. Film is not what one normally associates with LeWitt. Moreover, an artist known for the minimalism of geometry, how would Lewitt work with the fluid, definitively non-geometric, human body engaged in dance? I was uncertain what to expect, but definitely intrigued.

In the opening moments, dancers dressed in androgynous white suits cross the stage two by two. The choreography here is deceptively simple and repetitive. It is emblematic of the 78-year-old Childs’s attempt to distill complexity into its essence. Indeed, look a little harder and you can begin to perceive the complex exploration of space through the movement of bodies that is complemented by the relentless rhythm and repetition of Glass’s arrangement.

Somehow, throughout the entire performance, I kept expecting the score to change. Yet, the repetition — a signature motif of 81-year-old Glass, perhaps best known for the musical score to the film Koyaanisqatsi, among a large body of work that has cemented his reputation as among the most important composers of the 20th century — felt fresh each time. Likewise, the dancers executed the same choreography along the same horizontal path on the stage. And then, as LeWitt’s film began to play on the scrim, they “doubled”: the original 1979 Lucinda Childs Dance Company moved in synchrony with the live performers bounding across the stage.

The film showed the original company performing the piece from different angles, reminding me of artist David Claerbout’s film, The Algiers’ Sections of a Happy Moment, which is on show at NYU Abu Dhabi’s Gallery. Claerbout’s film shows one moment from a multitude of angles, while LeWitt’s film depicts the same choreography from distinct angles, creating a multi-dimensional experience, playing with our visual and temporal perception of the piece. The “before” two-dimensional performance was now counterposed against a multi-dimensional experience. So here in film and in dance was LeWitt’s wonderful, beautiful obsession with geometry.

The repetitive nature of Glass’s composition and Childs’s choreography makes Dance feel like a meditation on time, while LeWitt’s 1979 film reinforces that focus on temporality. As the current and past company turn and leap together to the same beat, they manage to collapse a time span of 40 years.

Dance is a sensorial stunner that will leave you electrified. Make sure to see the final performance of this seminal work on September 6, after which it will be retired to the archives.

#thinkpiece: What is the obsession with celery juice?