Menu
Imagine this scenario: Concerned about Joe Biden’s Middle East policy and the International Criminal Court’s decision to investigate war crimes in the West Bank and Gaza, Israel decides to get on everyone’s good side and announces that it will vaccinate the entire Palestinian population against Covid-19. Such a decision would be an instant public relations victory. But dream on. While Israel is among leaders in the world in inoculating its population, it has shown no inclination toward... 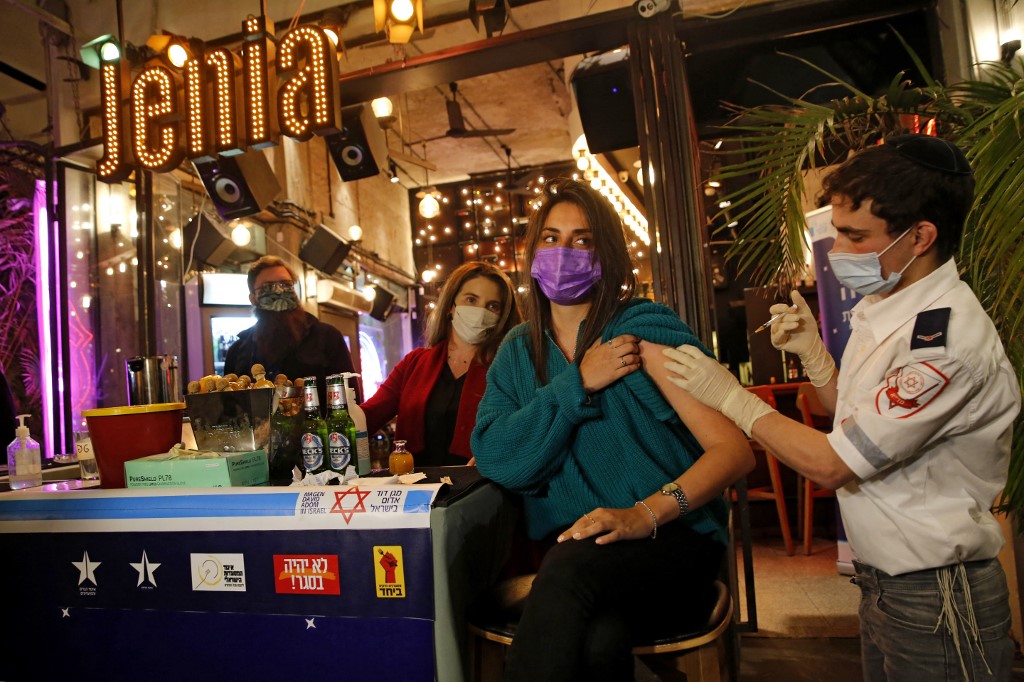 A health worker administers the COVID-19 vaccine to an Israeli at a bar in the coastal city of Tel Aviv on February 18, 2021/ GIL COHEN-MAGEN / AFP

Imagine this scenario: Concerned about Joe Biden’s Middle East policy and the International Criminal Court’s decision to investigate war crimes in the West Bank and Gaza, Israel decides to get on everyone’s good side and announces that it will vaccinate the entire Palestinian population against Covid-19.

Such a decision would be an instant public relations victory. But dream on. While Israel is among leaders in the world in inoculating its population, it has shown no inclination toward taking care of all of the people under its control — the Palestinians being the excluded class. Worse, it appears to actively seek to be an impediment to good sense. In February, that extended to turning away a truck bound for Gaza with vaccine the Palestinian Authority had secured from Russia. The situation in Israel-Palestine, however, is not unique in vaccine “un-diplomacy.”

The pandemic has not been an advertisement for the claimed moral superiority of the West over the Rest.

But first, back to Israel — and bear in mind here that it claims to be the only Western, or at least Western-styled, nation in the Middle East. Admittedly, under international law Israel’s obligation to vaccinate the Palestinian population living under military occupation is unclear. As the occupying power, Israel has specific responsibilities for the occupied population’s medical needs. But a global pandemic is a unique situation that isn’t specifically addressed. Nonetheless, you’d think there would be moral grounds for helping out, as well as enlightened self-interest — Israel’s population interact with Palestinians on a daily basis in many cases, after all.

An apologist might argue that Israel doesn’t have enough vaccine to spare. And this, in fact, speaks to the wider unsavoriness of the vaccine-grab among — specifically and exclusively — Western nations. In their rush to secure vaccines for themselves, wealthy countries in the West, like the United States and some members of the European Union, have turned their backs on large areas of the developing world. Canada has vaccines on order for more than five times the number of its population, even as South Africa has been able to secure only one million doses for its 55 million people (full disclosure: I live in Cape Town).

Access to vaccines reinforces power dynamics between the developed and developing world. While the rich vacuum up any vaccine they can find, the rest are left wondering if they will get access to any doses at all.

And lest you think the G-7 has now pledged to change all that, remember that Britain, for example, promises only to donate leftover vaccines (eventually).

Then there is the issue of the vaccines themselves. Western-designed vaccines such as those from Moderna, Pfizer-BioNTech and AstraZeneca have generally been perceived as the gold standard in quality and effectiveness. But what of the Russian and Chinese versions? The implicit prejudice against “inferior” vaccines made by these non-Western countries resulted in a New York Times opinion piece pleading that “it’s time to trust China’s and Russia’s vaccines.” The fact that such a plea had even to be made to the Times’ liberal readership speaks volumes.

Despite (mostly unfounded) concerns about the quality of Russian and Chinese vaccines, new geopolitical alliances are being formed along national vaccine lines. The UAE, Egypt, Serbia and Pakistan are among countries to have approved the Sinopharm vaccine from China. Bolivia, Indonesia, Turkey and Brazil have approved another Chinese vaccine, made by Sinovac. The Russian version has been approved across more than a dozen countries in the developing world.

As the world becomes more fragmented along the lines of access to vaccines and to which vaccines, it’s instructive to consider just how far it has veered from the globalization put forward in the West over the last 30 years. The “Flat Earth” utopia advanced by the journalist and best-selling author, Thomas Friedman, for whom humanity is linked by Western-led and -styled peaceful global trade, digital communication and strong institutions, has proved a farcical myth during the Covid-19 pandemic.

Instead, international institutions are under attack, and vaccination efforts that would enable countries to gain control over the virus are disjointed and viciously national. Benevolent American leadership — a key to Friedman’s Flat Earth hypothesis — has all but evaporated.

The West, essentially, asserts that it is more important after all than the rest and is more deserving of the available Western vaccines. While globalization is indeed a sound idea, the shame is that the West was never committed enough when it mattered most.

At a moment of existential peril of the highest order — bigger than any economic meltdown or inflationary run up or monetary crisis — it was China and Russia (but mostly China) that rode to the rescue of the poor. Regardless of China’s motives, the pandemic now has recast power and influence in Beijing’s favor.

Does that matter? The West feigns concerns for all; but in times of stress, it still believes itself to be more important (hypocrisy be damned). Its claimed values are not, after all, unqualified. China, on the other hand, does not hide its self-interest, and its unashamed ambition for superpower supremacy should be a cause for wariness. Neither the West nor China is an ideal partner if you’re poor. However, China is even less of a model for the world, and even more a risk in the aggregate to the individuals that make up a state. Just check with the Tibetans, Uighurs, and the people of Hong Kong and Taiwan.

Israel, in its recent engagement — or maybe disengagement — with the Palestinians under its control, provides a stark example of what might happen if the West (or near-West) does not live up to its idealized promise. The vaccine that was stopped while on its way to Gaza came from Russia. China can’t be far behind.

Should we all be signing up for digital health monitoring?