Menu
The UAE is preparing to make history with its first space mission and the two Emirati astronauts chosen for the job are doing their best to stay fit and focused.  The UAE’s first astronaut, Major Hazza Al Mansouri, takes off for the eight-day mission on September 25 at 5.56pm. When his spacecraft docks with the International Space Station (ISS) at midnight, he will become the first Arab to set foot there.  Al Mansouri and his... 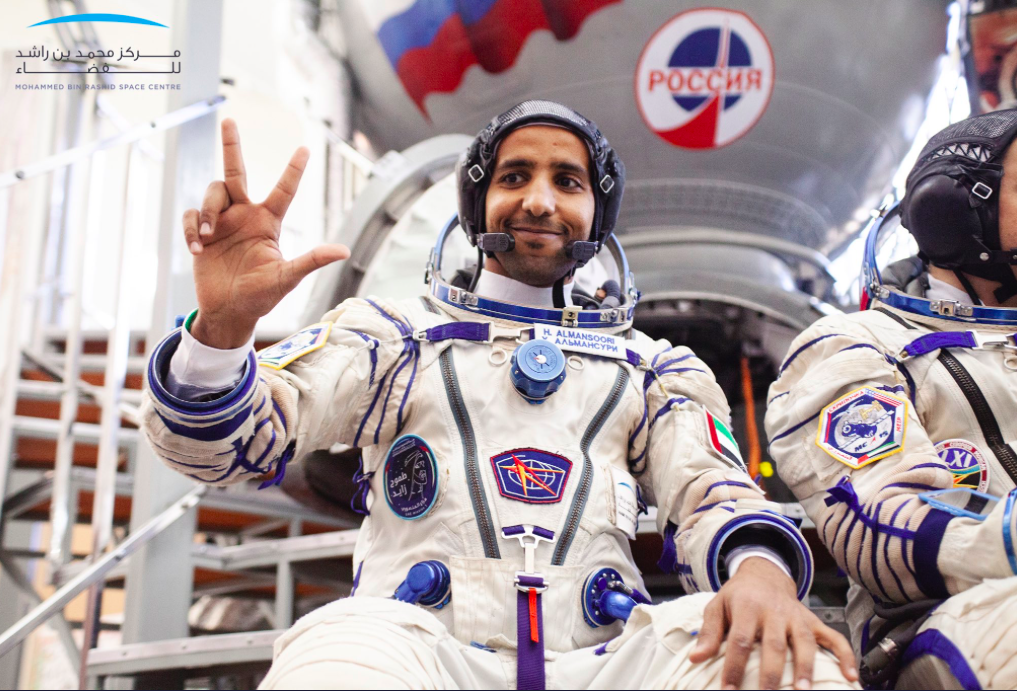 The UAE is preparing to make history with its first space mission and the two Emirati astronauts chosen for the job are doing their best to stay fit and focused.

The UAE’s first astronaut, Major Hazza Al Mansouri, takes off for the eight-day mission on September 25 at 5.56pm. When his spacecraft docks with the International Space Station (ISS) at midnight, he will become the first Arab to set foot there.

One of the sessions, which Al Mansouri shared on social media, included spinning in a special rotating chair. As Al Mansoori explained on Twitter (twitter.com/astro_hazzaa) in August: “I spent 10 minutes in the continuous cumulation of Coriolis acceleration in the Russian (HKYK) chair, which helps reduce the effect of space motion sickness.”

This chair is just one part of the rigorous training astronauts undertake for life in a completely different environment from Earth, tailored to the type of mission they have been chosen to execute, explains Salem Humaid Al-Marri, assistant director general for science and technology at the Mohammed Bin Rashid Space Center (MBRS).

The 10 minutes spent experimenting with the rotating chair on the ground stimulates the inner ear’s balance function, helping to reduce impact on the human body once it is exposed to zero gravity in space. Related exercises include centrifuge training, which simulates the ballistic descent to Earth during landing.

As Al Mansouri wrote on Twitter, that is where “astronauts experience 8G’s [gravitational force equivalent] their weights.”

The Emirati astronaut on the mission will serve as second flight engineer to Nasa astronaut Jessica Meir and Russian cosmonaut Oleg Skripochka, as they lift off from the Baikonur Cosmodrome in Kazakhstan on board the Soyuz MS-15 spacecraft.

“Since it is a short mission, the dietary plan and training program is different than if it was for a longer mission,” says Al Marri. “At the core of the astronauts’ fitness regime is self-discipline. They maintain a healthy diet and exercise regularly for about an hour a day. They don’t keep a fitness regime as extreme as an elite athlete, but nonetheless it requires great diligence and focus.”

One of the reasons the astronauts need to stay in shape is that their suit is custom-made; there is no room for extra pounds. There’s a lot of other training to do too, related to the scientific experiments conducted during the mission and what to do in emergencies, says Al-Marri.

Al Mansouri will conduct 16 biological, physical and geological experiments that are not possible to carry out on Earth. In one of those experiments, he will plant a date seed and watch it grow in orbit.

Astronauts must demonstrate a number of skills, including the ability to remain calm under pressure and respond quickly to changing conditions.

“There is also training for life on ISS, from how to eat, to sleep, and go to the restroom, and connect to the net and so on,” says Al Marri.

Once on ISS, crew members generally have 11 hour days, broken down into 8.5 hours of work and 2.5 hours of exercise, explains NASA spokesperson Brandi Dean.

The exercise allotment factors in time for changing, setting up equipment, the exercise itself, stowage and cool down and clean up, she says. Their exercise routine includes work with NASA’s Advanced Resistive Exercise device, which is basically a weightlifting machine that can be used in microgravity. They also do cardiovascular training, either on an exercise bike or a treadmill.

So why do astronauts spend so much time every day working out? The body needs the effort; without the pull of gravity bones, muscles and the cardiovascular system weaken as they don’t have to work as hard.

“Our primary way to combat that and keep them in good shape for when the astronauts return to Earth, is through exercise,” said Dean.

The exercise regime would also set the astronauts up well for possible longer missions in the future.

“It takes about nine months to get to Mars, for example,” says Dean. “If astronauts didn’t stay in good shape on that long journey, when they landed on Mars, they might not be able to set up a habitat or go on a spacewalk to explore it.”

The astronauts also have 8.5 hours of sleep scheduled but as Dean points out, “We don’t monitor it to make sure they go to bed on time.”

In the tradition of taking items that will give them comfort and pride while in space, the UAE’s astronaut will take a silk UAE flag, a copy of the Quran, personal belongings including family photographs and traditional Emirati clothes, as well as an historic 1976 photo of Sheikh Zayed Bin Sultan Al Nahyan with the Apollo 17 team.

There will also be books, including Qissati by Sheikh Mohammed Bin Rashid Al Maktoum, Vice President and Prime Minister of the UAE and Ruler of Dubai, and a children’s book, published by MBRSC, that Al Mansouri will read live to children.

“There will be several historic moments, such as him putting on a ghutra in space,” said Al Marri. “He is also taking with him 30 al ghaf tree seeds, the symbolic tree for the Year of Tolerance. We will plant the seeds that went to space across the UAE.”

In another first, Al Mansouri will also take three Emirati dishes with him to share with the crew on ISS, the first time Gulf cuisine is tasted in zero gravity.

“I’m honored to be the first astronaut to host an Emirati night on board the ISS,” he told media, “to promote the Emirati culture, which I am proud to belong to, and share some delicious Emirati food like salona, madrouba and balaleet, which I’m sure they will like.”

As for the rest of the meals, the Russian Space Food Laboratory company will prepare a daily menu for Al Mansoori with foods he chose while training in Star City, Russia. Al Mansouri and Al Neyadi spent one and two hours a day for a week tasting and evaluating about 200 different types of halal space food.

Nasa has traditionally used retort pouches and freeze-dried food, while the Russians prefer tins and tubes. Each meal aboard the space station has been prepared to provide balanced nutrition while ensuring that they are easy to carry, store and use.Though it comes  in cans and tubes and has the consistency of paste, Al Mansouri deemed it “similar to the food we eat on Earth.”

Some of the dishes eaten in space, as shared by NASA, include almonds, banana pudding, beef stew, coffee with cream and sugar substitutes, mocha yogurt, shrimp cocktail and many other dishes from a menu of more than 230 items.

Before his mission, Al Mansouri will spend two weeks confined to a containment area with the rest of the main and back-up crews, to ensure they are free of germs or infections. In a zero gravity environment, the effect of infection on the human body can be multiplied. During their quarantine, Al Mansouri and Al Neyadi will be in the care of the Russian Federal Medical-Biological Agency, which will be responsible for preventing germs from entering their ground and space facilities. The facilities and tools they use will be sterilized frequently, as will their accommodation, buses and training sites.

Once they are in space, they will join history’s roll call of astronauts and cosmonauts who have marveled from afar at the miracles of life and human perseverance.

It’s an experience granted to very few.  This is how Neil Armstrong, the first person to walk on the moon, described it:

“It suddenly struck me that that tiny pea, pretty and blue, was the Earth. I put up my thumb and shut one eye, and my thumb blotted out the planet Earth. I didn’t feel like a giant. I felt very, very small.”

The astronauts will have a final opportunity to speak to their families in the hours before the launch from behind a thick wall of glass.

“Being an astronaut is tough, but also very exciting, as they are living out their dreams,” said Al Marri. “So they will do whatever it takes to be the best they can be and make their country proud.”

Abu Dhabi Awards: Why is doing good deeds so good for you?