Menu
For several years, Single Use Plastic (SUP) has somewhat dominated the region’s recycling landscape, with numerous campaigns highlighting its negative environmental impact and water bottles becoming synonymous with the fight for sustainability.  Since 2009, the UAE-based social enterprise Goumbook has been at the heart of such initiatives and was the driving force behind what became the nationwide campaign Dubai Can, endorsed by HH Sheikh Hamdan, Crown Prince of Dubai.  Recently, however, Goumbook has shifted its... 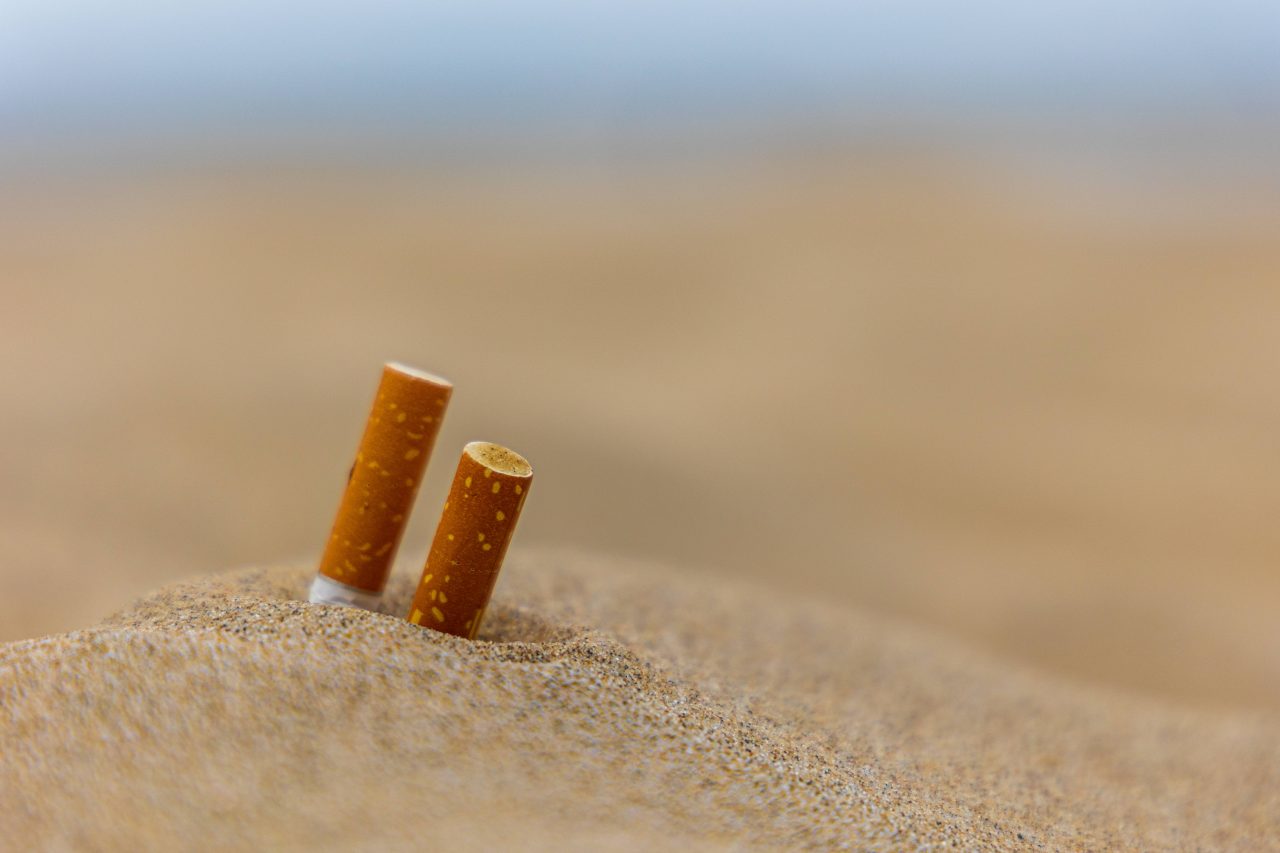 For several years, Single Use Plastic (SUP) has somewhat dominated the region’s recycling landscape, with numerous campaigns highlighting its negative environmental impact and water bottles becoming synonymous with the fight for sustainability.

Since 2009, the UAE-based social enterprise Goumbook has been at the heart of such initiatives and was the driving force behind what became the nationwide campaign Dubai Can, endorsed by HH Sheikh Hamdan, Crown Prince of Dubai.

Recently, however, Goumbook has shifted its focus towards a new — and ubiquitous — adversary: cigarette butts. The Save the Butts campaign, launched in February, aims to address the impact that littering of cigarette butts is having, particularly on the planet’s oceans.

The aim is to transform cigarette butts from foe to friend — using a circular economy approach to collect them and transport them to the new Terrax recycling plant in Dubai, where they can be turned into construction materials.

“We have concentrated a lot on removing single-use plastics from our daily life,” Tatiana Antonelli, founder and managing director of Goumbook, explains to Livehealthy. “Now it is out there and people know about it, locally and globally.

“But when it comes to cigarette butts, the awareness just isn’t there. Most people — smokers and non-smokers alike — don’t realize that they are made of plastic. They assume they are material, like paper or cotton. People aren’t aware of the magnitude of this problem.

“We need everyone to be more aware; we want smokers to be more responsible and dispose of these butts in a better way, but also for us as individuals to keep our beaches clean. If we see them, pick them up and help, as citizens, to keep our cities clean.”

The false assumption about what is in cigarette butts has led to catastrophic consequences, notably for the world’s beaches and oceans. According to a 2020 NBC news report, butts have been the most-collected object on beaches every year of the past three decades, to an estimated 60 million. And according to a report in The National, in 2018 Dubai Municipality’s waste management department collected almost a half a million cigarette butts on beaches alone.

This is sadly just a drop in the heavily polluted ocean, with an estimated 4.5 trillion cigarette butts dropped on the ground every year. Once there, they create a long-term problem: the filters are 95 percent plastic — made with cellulose acetate fibres — they take 10-15 years to decompose.

The UAE’s beaches are certainly not immune and it has prompted Goumbook to lead collections and clean-ups for corporations, schools and universities, starting in Dubai. With International Earth Day taking place on April 22, the next month is set to be filled with opportunities for members of the public to play their part.

“It’s important not just to talk about specific environmental issues,” Antonelli explains. “We don’t want to focus all the time on doom and gloom, and the bad consequences to human health and the environment.

“We want to find solutions that people can play a positive part in, where they can spend time out in nature and feel good about the contribution they are making. This is a campaign for the whole of the UAE. We started in Dubai but we want individuals, schools and companies to join across the emirates.”

When they tackled this issue, Antonelli and the team at Goumbook were pleasantly surprised to find at least one workable circular economy solution  in the UAE. While individual butts are still a major issue, in the case of a cleanup where there are large number, waste management app ReLoop can transport the butts to Terrax, which then creates new, usable products out of the waste.

The butts are mixed with plastics and fibres, as well as other materials like palm tree leaves, and used to produce a material used to create panels, tiles and other construction materials. That material can also be used as a replacement for plywood, cutting down on depleting natural resources.

“It is a renewable solution and the perfect way to close the loop and create awareness about the fact that waste can become valuable,” Antonelli says.

“With cigarette butts, there is definitely an aspect of disgust — they are dirty, they are on the floor. It isn’t something that you want to look at but it is also something that most people don’t want to touch. On the beach, when you put your towel down you just change place — you won’t pick it up and put it in the trash.

“We want to change that mentality.”

Tomas Oliveira, a Year 12 student at Nord Anglia International School (NAS) in Dubai, is among the early champions of Goumbook’s Save Our Butts campaign. On a recent beach cleanup he organized with his fellow students, they collected 9,200 butts.

“It was really great to see so many people coming together to work on something so beautiful like this,” Tomas tells Livehealthy. “It was a really inspiring activity to do with my peers and to see all the waste we collected in 30 mins.

“I think everyone in Dubai wants to help and make a difference and this initiative is a great chance for people to do that. I hope other people will run the initiative in their own schools to contribute to a bigger impact. If only one year group was able to collect 9,200 cigarette butts, imagine the incredible impact we would have if lots of schools joined Save The Butts?

“The most important thing is for the general public to learn about this problem. It’s much easier to tackle this pollution problem before the cigarette butt reaches the sand. If people knew this, we wouldn’t have this problem in the first place.”

Empowering people to positively change their environment is central to Goumbook’s mission, and the organization has been encouraged by the initial reaction to its latest campaign. Dubai Municipality has provided practical support with bags and containers for collections, while the international NGO Ocean Conservancy has partnered to help measure the campaign’s success.

“What is incredible is that when we are out on the beach, we get a lot of people following us and asking what we are doing,” Antonelli says. “Then they ask how they can participate, and a key message to them is that you can do it on your own. You can go any time, do it any time.

“Collect the cigarette butts in a plastic container — some people use detergent containers or old gallon bottles — and then use the ReLoop app to arrange collection.

“Everything is reported using the app so you will know the weight of what you collected, what you’ve contributed in terms of CO2 reduction and waste reduction. It’s empowering to seeing the impact of what you’ve done.”

Youssef Chehade, the co-founder of ReLoop App, has noticed a major shift in interest in recycling over the past couple of years and is happy to be working with Goumbook to enable people to be proactive. 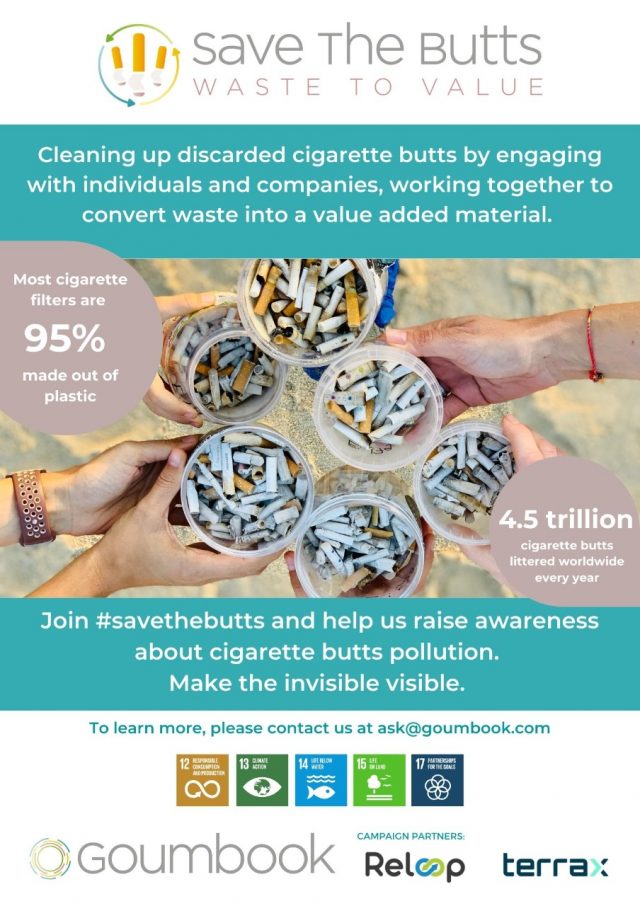 “We want to encourage households and people who don’t have access to recycling,” Chehade stresses. “There’s no question that interest in recycling has accelerated during the Covid-19 pandemic because individuals, businesses and governments have had time to sit at home and reflect on their impact. There has been a rethink of priorities for many, many people.

“With cigarette butts we are trying to highlight that they may be a small item but they are a big challenge to the environment. It’s worse than water bottles because they are difficult to see so easily get washed into the sea, where they are consumed by birds and fish. We want to show that small actions really matter and help close the loop.”

Beyond the beach, Goumbook is working with corporate clients to install cigarette recycling bins around buildings and car parks. They are designed to engage smokers, with questions like ‘Who is your favourite footballer: Messi or Ronaldo?’ giving people the chance to vote with their cigarette butts.

“When we started in 2009 there was such little interest in sustainability projects but today it is so exciting and positively overwhelming to see companies wanting to get involved. Finally, they understand what it means to have a positive impact.

“Before it was something they had to do for their Corporate Social Responsibility — it was a communication and marketing tool. Now it is about wanting to do it for education and because it is the right thing to do — to have an impact and make a difference. They also want to do it on a long-term basis, not just as a one-off.”

Thanks to Expo 2020’s heavy emphasis on sustainability, as well as the UAE’s hosting of COP28 in two years time, there is a new momentum for environmental initiatives across the emirates. The UAE now has its own Circular Economy Council and Emirates Global Aluminium (EGA) recently announced plans for its new EternAL recycling plant, which promises to process 150,000 tonnes of aluminium per year.

“Expo 2020 has seen a big push from an awareness and education point of view – there was so much happening in terms of events, talks. Some countries have come up with incredible solutions,” Antonelli says.

“But I think what needs to happen now is action. The EGA announcement is one that makes you sit back and say, ‘it’s actually happening’. Things are finally moving forward in a better way and we know we can play a part in that.”

3 healthy recipes for your next Iftar

Tips for managing diabetes while fasting in Ramadan