Menu
For Middle East the most obvious and immediate attraction of homegrown meat is as a potential solution to the ever-present problem of food security. 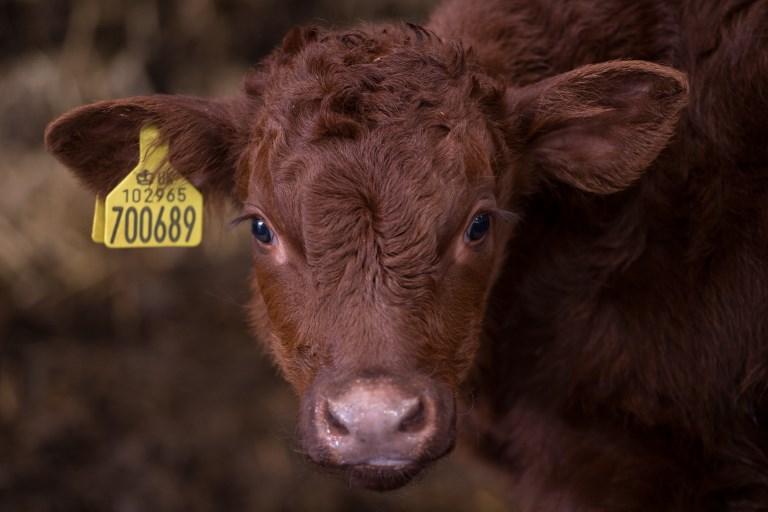 Newborn calves and cattle are housed in a barn on farmer Pip Simpson's farm in Troutbeck village in the Lake District National Park, near the town of Ambleside, northern England on March 29, 2018. / AFP PHOTO / Oli SCARFF

Ask any child what they expect from a zoo and invariably lions, tigers and elephants will be on the list. Pose the same question a generation from now and the big three may have been joined by chickens, goats and cows. The disappearance from the rural landscape of farm animals is one of the more extreme outcomes suggested for a revolutionary breakthrough in food production technology that promises to end humankind’s reliance on livestock for protein.

Five years ago, Dutch scientists held a news conference in London to present the world’s first lab-grown beef-burger. Professor Mark Post and colleagues at Maastricht University had developed a technique for growing muscle tissue from stem cells extracted from living cows. Food critics were invited to taste the result and they declared “the world’s first slaughter-free meat” palatable and even burger-like. Since then, other organizations around the world have joined the race to develop and bring to market a disruptive technology that, say its supporters, has the potential to end global famine, make the food-security concerns of the oil-rich, water-poor nations of the Middle East a thing of the past and even throw the juggernaut of global warming into reverse.

Those are all big claims. But now, with the news that cultured meat is poised to leave the lab and, according to one San Francisco-based company, could make its debut in the real world by the end of this year, they deserve closer scrutiny.

Many issues remain to be resolved – with the technology itself sorted, the focus now is on overcoming regulatory hurdles and scaling up a painstaking laboratory process to industrial levels of production.

Perhaps the biggest barrier of all to “clean meat” is public perception. Human carnivores have a complex, denial-based relationship with the animals we breed for food. We buy our children cute furry toys while feeding them their real-life counterparts. Yet while we are comfortable with the self-delusion inherent in this, studies show many of us are repulsed by the idea of consuming cultured meat. Then, of course, there is consumer mistrust of what the media has been happy to demonize as “Frankenfoods.” Despite the clear advantage of genetically engineered crops, which can be manipulated to be more productive, adaptable to arid soils and resistant to blight, genetically modified food continues to struggle to find a place in our shopping baskets.

But such are the potential gains to be made from this new technology – for companies, countries and, indeed, the entire planet – that no obstacle is likely to stand in the way of manufactured meat for long.

The prospect of ending famine in a world where the current global population of over 7.5 billion is expected to hit 11.2 by 2100 must surely sit at the top of the “pros” column, and not just by handing out grown meat. A study in 2014 from the Institute of the Environment at the University of Minnesota concluded that abandoning global meat farming would free up enough crops, currently used to fatten cattle, to feed four billion people.

Designed to be grown leaner than the real thing, cultured meat would also be a healthier option, with long-term benefits for nations struggling to cope with the cost of caring for increasingly elderly populations battling multiple health problems, such as in the Middle East.

The humble “clean” burger and related products could also save the planet. In 2015 a report from the London-based think-tank Chatham House claimed that greenhouse gases from livestock production accounted for 14.5 percent of all global output – “as great a share … as tailpipe emissions from fuel burnt in all the world’s vehicles.”

But for the Middle East, especially the nations bordering the Gulf, which import nearly all their food, the most obvious and immediate attraction of homegrown meat is as a potential solution to the ever-present problem of food security.

Some might comfort themselves with the belief that these countries are rich enough to overcome global food shortages by ensuring they are always the highest bidder. With 90 percent of the food consumed in the Gulf imported, this is at best an unsustainably expensive proposition. The Economist Intelligence Unit has calculated that by 2020 the Gulf’s bill for imported food will have exploded to $53.1 billion, up from $25.8 billion in 2004.

But “import at any price” is also not a failsafe strategy, as Gulf nations discovered during the global food crises of 2007-08 and 2010-11. Though oil and food prices generally rise and fall in tandem, it became apparent that no amount of money could overcome the blanket bans on exports imposed by traditional exporters of grain and meat, such as India, Vietnam and Argentina.

As a result, moves were made to secure food supplies by buying up farmland overseas. But again, this strategy, both controversial and increasingly more expensive, is only a temporary solution to a long-term problem, exacerbated by growing populations.

When it comes to sustainability, the Gulf states have a reputation for thinking out of the box – the UAE in particular, with a canny eye to a future beyond the oil, has invested extensively in sustainable alternatives to fossil fuels. Which is why a similarly counterintuitive development in the Netherlands last week will surely have rung bells in organizations such as the Abu Dhabi Investment Authority.

On July 17, Mosa Meat, the Maastricht University spin-off company that is the leader in the field, announced it had raised 7.5 million euros to commercialize its innovative product. The key investor? The Swiss-based Bell Food Group – one of the leading meat processors in Europe.

If the sovereign wealth funds of the Gulf states aren’t yet falling over themselves to invest in the burgeoning technology of artificial meat, surely this is the clue that should send them scrabbling for a place at the table.

4 important (and free) ways to practice self care