Menu
When it comes to running, Caroline Labouchere may like to race, but she is not in any kind of hurry. It wasn’t always that way for the 55-year-old mother of two grown children, who lives in Dubai with her husband David and two dogs and travels frequently for a bustling new career as an international grey model.   She used to do 100 mile-plus bike races, but gave that up after a fall. (“Also, you have... 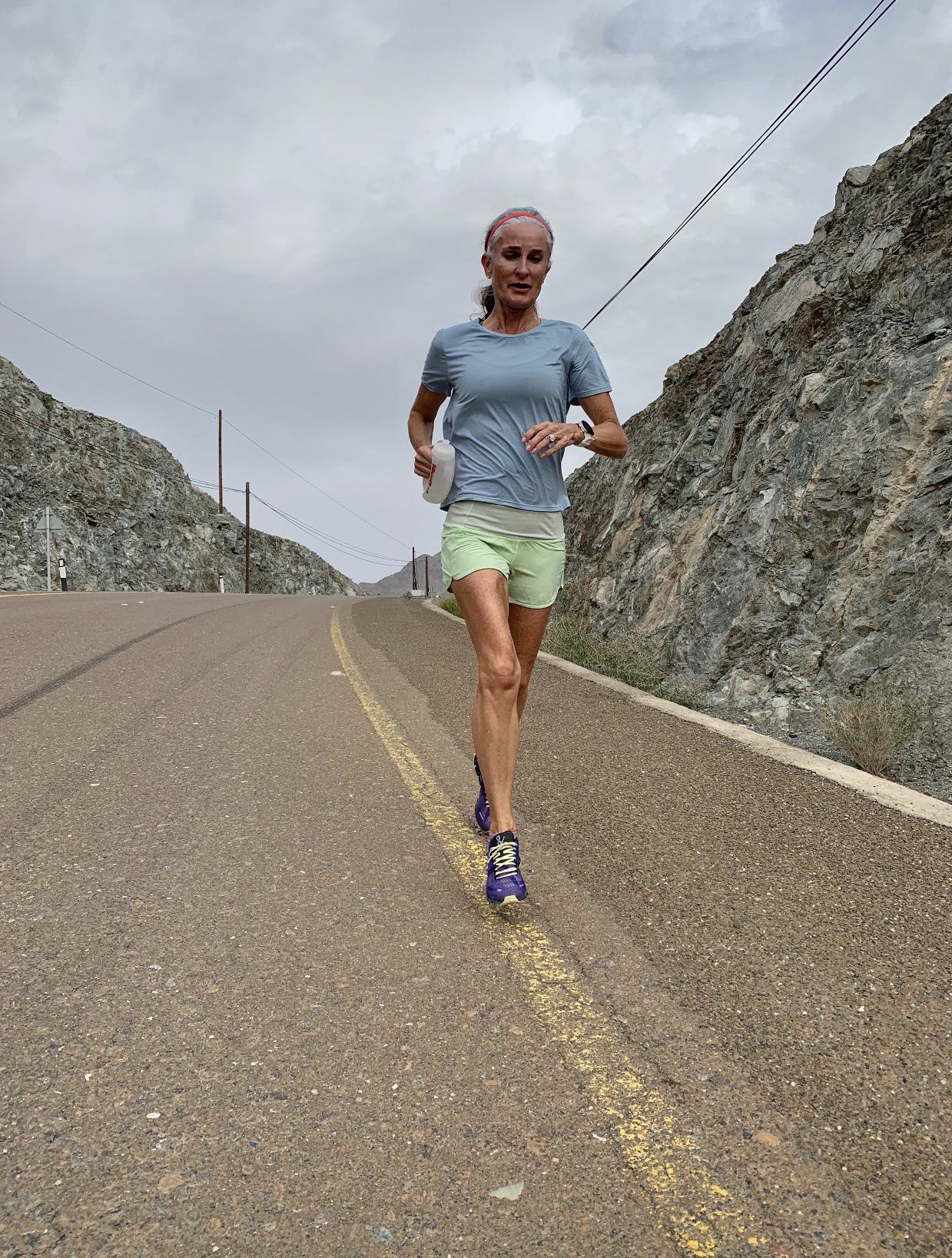 When it comes to running, Caroline Labouchere may like to race, but she is not in any kind of hurry.

It wasn’t always that way for the 55-year-old mother of two grown children, who lives in Dubai with her husband David and two dogs and travels frequently for a bustling new career as an international grey model.

She used to do 100 mile-plus bike races, but gave that up after a fall. (“Also, you have to load everything up in the car, and the dogs need exercising,” she explains.) She also used to run 10km races, challenging herself to constantly improve, to always beat her time.

Her husband’s Tuesday night speed-work sessions — unlike his wife the former British military-turned trainer and top-ranking Ironman triathlete very much does like to run fast — were a source of frustration, too.

“I got really just fed up with the Tuesdays and fed up with trying to beat myself, because I tend to train with the younger people and they’re all faster than me,” she explains. “Although I was still winning in my age group, if there isn’t an age group, I’m nowhere. That’s just deflating, really.”

Labouchere was still trying to race when she ran her first marathon in Paris with her son, Max, completing it in just over four hours.

“We could not walk the next day,” she says. “We went to the restaurant that night and there was no table downstairs. We had to go upstairs. It’s an Italian restaurant. We had to walk forwards and down backwards. We were in so much pain. We were literally lifting our legs with our hands.”

Labouchere struggled through her first marathons, aiming for faster times and resorting to walking when she just couldn’t achieve them. Then after a hot and torturous Dubai Marathon, her husband suggested she keep it simple and aim for six-minute kilometers. 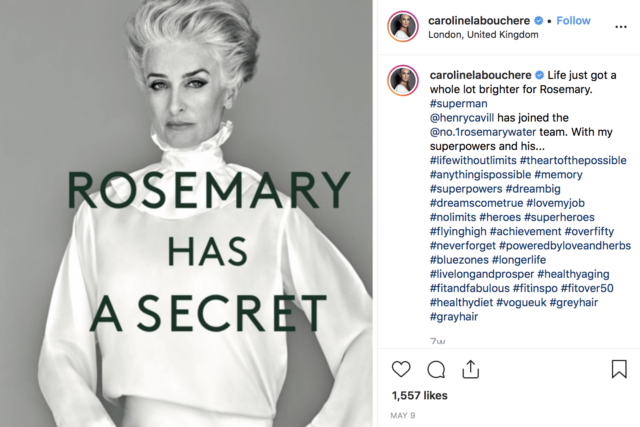 That was the start of her love of taking runs long and slow — and truly enjoying them. After months of intense training, in April she sailed through her first ultramarathon, the 56km Old Mutual Two Oceans Ultra Marathon in Cape Town, South Africa.

And while Labouchere knows there are benefits to speed work, including slowing the loss of fast-twitch muscle fibers that come with age, she’s decided she just doesn’t care.

“I can’t understand why I would want to run fast,” she says. “It’s nice running slow. You get smells. I say hello to everybody that I come past. It’s also no pressure. You chat.”

Labouchere was working as a school receptionist when she started modeling just two years ago. Although she had dreamed of that kind of career as a teenager, she hadn’t thought about it since getting swept up in marriage, motherhood and the kind of moving around that comes with having a husband in the military. She was drawn into the business unexpectedly, while accompanying her daughter, Mimi, also a model, on a shoot.

Since then Labouchere has appeared in British Vogue, walked the runway in London Fashion Week for the British brand Rixo and appeared in digital campaigns for London’s Langham Hotel and Abu Dhabi’s Al Jubail Island.

Her beauty combined with her long grey hair, which she cut off and stopped dying in her late 40s, is a clear draw for advertisers. But Labouchere also exudes a refreshing sense of confidence, grace and optimism, the kind that comes with a midlife well-lived. That means she is also becoming a sought-after source of inspiration for the growing ageless — or age-positive — movement.

On that front, there is definitely a change afoot, says Labouchere.

“This is the first time there have been this many 50-plus-year-olds who are feeling the way we do,” she says. “Things have to change just because of that, because behind us are more. We’re all wanting more from life, demanding more from life.”

In June she spoke at a techfit summit in Munich; in October she will address a women’s conference in Napa Valley, California.

“Life is just really exciting because when I open my email in the morning, I have no idea what’s going to happen,” she says. 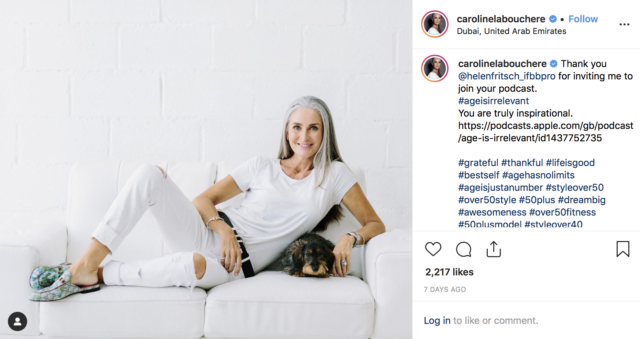 Labouchere has become an influencer, too, with 56k Instagram followers and counting. Here she covers all aspects of her life: the travels, the glam process, the shoots, trying out beauty treatments and products and more personal aspects, like missing her kids and her dogs. And of course, running, which Labouchere loves for many reasons.

“Floating,” she wrote in a caption earlier this year. “Sometimes there’s an energy that you can’t explain. And the more consistent you are about it, the more it seems to manifest itself. Life is about energy. The more you can attract, the more you can do. A virtuous circle!”

Races provide Labouchere with something to work toward — “I feel uncomfortable if I don’t have a goal”, she says — and physical benefits too.

“I like being slim,” she says. “That would be the main reason for me exercising. If I could sit on the sofa and eat Maltesers and take a pill, I probably would do that. If I just do five kilometers a day, that isn’t going to be enough.”

As for those people out there who want to get into running but are wondering how to get started, Labouchere has some advice.

“I would tell people that if they wanted to, they could go out and walk [toward] a lamp post, run a lamp post,” she says. “Progress to two lamp posts, walk one, two, walk one. Eventually, run in five lamp posts and walk one. You don’t have to do any more than that.”

The Labouchere family can’t do without physical activity — they are the kind of people who rise in the middle of the night to run 50 kilometers in the heat at Al Qudra for fun and a challenge — but they do like to relax and take in a good Netflix series too.

And despite their shared love of running long distances, Labouchere says her preferred pace means she only runs with her husband in the weeks he’s recovering from competing in another Ironman.

“If we go running together, he’s 10 feet in front of me and I use so much energy, with steam coming out of my ears, because I’m just, ‘Hello, are we running together?’…He can’t comfortably run as slowly as I do.”

Yet despite their different approaches, the couple agrees wholeheartedly about one of David’s maxims: Time on your feet is just the most important thing.  “It doesn’t matter what you do when you’re out there, but just do it.”

She adds one other, very important, note.

Stick Mobility is the new workout for every body