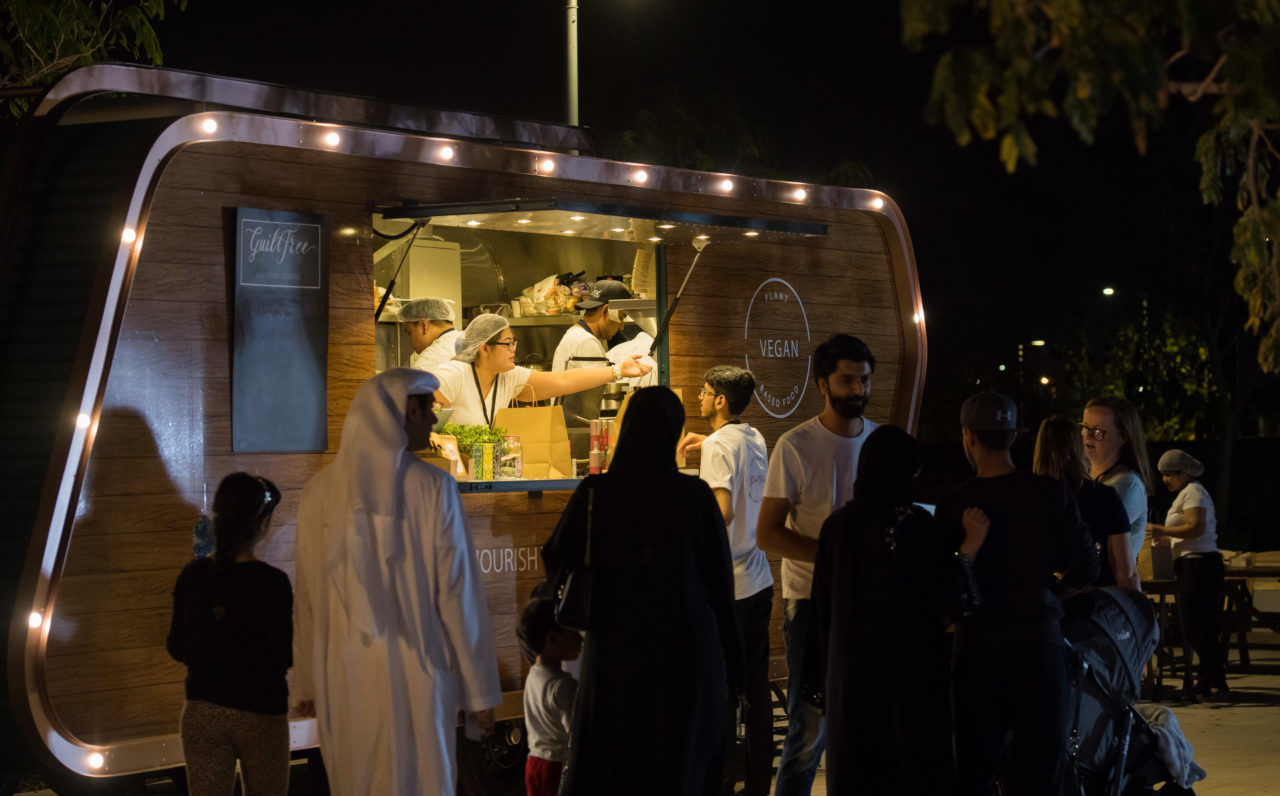 For those plant-based people living in Abu Dhabi who think Dubai gets all the vegan and organic love, your time has come. GuiltFree’s retro-looking new food truck – the first vegan food truck in the capital – has a location, in the parking lot beside Nation’s Towers.

The company officially launched out of a kitchen in Mussafah early last year, and has been quietly delivering a range of vegan goodies in Abu Dhabi, but occasionally as far afoot as Al Ain, Dubai and Sharjah. They launched their food truck late last year, appearing at several events before finding their spot by the Corniche.

But before that, the Emirati brother and sister team behind the venture – Abdulla and Miriam Al Omaira – started experimenting with dishes right out of a small kitchen at home a few years ago.

Abdulla, 27, was studying in Los Angeles when he first started experimenting with veganism.

“Typical,” he says, laughing. “It was back [in] 2011 and I was a bit overweight from college years. I was ordering a lot online. So I started researching the best diets. I started getting educated about veganism, about what it means, the health aspect, the environmental aspect….”

Abdulla didn’t become fully vegan until mid-2014, although he did lose weight as he experimented with the lifestyle for months at a time. Meanwhile he was struggling to find his way in a mainstream career, trying law in London, anthropology in LA, law again — in French this time — back home in the UAE.

Then he went all the way to India and studied to become a certified ashtanga yoga instructor.

“I wasn’t really comfortable in a university setting,” he explains. “I needed things to inspire me.”

Miriam, 29, had always been healthy, says her brother.

“She’s always been the captain of varsity teams in high school,” says Abdulla. “She was very outgoing, sporty, into fitness.”

She had also long found the food available at events wanting, nutrition-wise, and proposed the business after her brother fully embraced being vegan.

“She was like, ‘Why can’t we do something that’s vegan, that’s also organic and tastes good?” recounts Abdullah.

The pair created most of the dishes themselves and personally trained their chefs. They want the menu to be adaptable – with seasonal and celebratory twists – and are determined to offer something for all tastes.

The food truck, which has a cool retro look, complete with a faux-wood exterior and rose gold trim, was busy throughout its first weekend. Among the offerings: a delicious poke bowl with gluten-free sushi rice, miso marinated mushroom, pickled veggies, cabbage and carrot sauerkraut and tamari soy sauce. There was also a killer roasted veggie pizza, a filling buffalo cauliflower starter featuring deep-fried cauliflower topped with mushroom sauce, and a very tasty gluten-free brownie.

All vegan cheeses and most of the nut milks are made in the GuiltFree Mussafah kitchen. Abdulla’s favorite item on the menu, Simit, is a homemade Turkish bagel topped with a real rarity: homemade vegan labneh. (Abdulla won’t give away the recipe, but he did let one ingredient slip: coconut yoghurt.)

The vegan labneh also featured a GuiltFree twist on an Emirati favorite, a special they created for Festember: regag with organic potato chips.

Abdulla says the company also offers biodegradable or compostable takeaway containers, and makes sure that if they can’t source organic ingredients within the UAE, they do so regionally.

In addition to meals, salads and desserts, they also make gluten-free, vegan cakes. And while there are plans for a cafe, don’t expect it to be typical, says Abdulla.

Something that’s also important to the owners is making sure the prices are reasonable.

“We want affordable pricing,” he explains. “Our product margins are not exaggerated, even though all our food is organic.”

GuiltFree aims to appeal to everyone, whether they eat animal products or not, and prove that plant-based eating, even part of the time, is a delicious, healthy alternative to meat.

“It’s not shoving veganism down your throat,” says Abdulla. “It’s how much you can incorporate plant-based foods into your diet.”

• GuiltFree takes orders via their online portal and also through Talabat. Their food truck will be at the Manarat Al Saadiyat Vegan Market, Friday, December 14, from 12pm to 5pm.

7 things to know about the Dubai ultramarathon

The buzzy workout F45 has landed in Abu Dhabi