Menu
‘Golf in the desert’ has become one of sport’s great oxymorons but the arid landscape of the Middle East is now punctuated by some of the world’s finest golf courses. Since Emirates Golf Club opened in 1988 as, quite literally, a green oasis in the desert, the UAE’s golf profile and its role in the global game has grown enormously. The history of golf in the Gulf The Majlis Course at Emirates Golf Club has hosted... 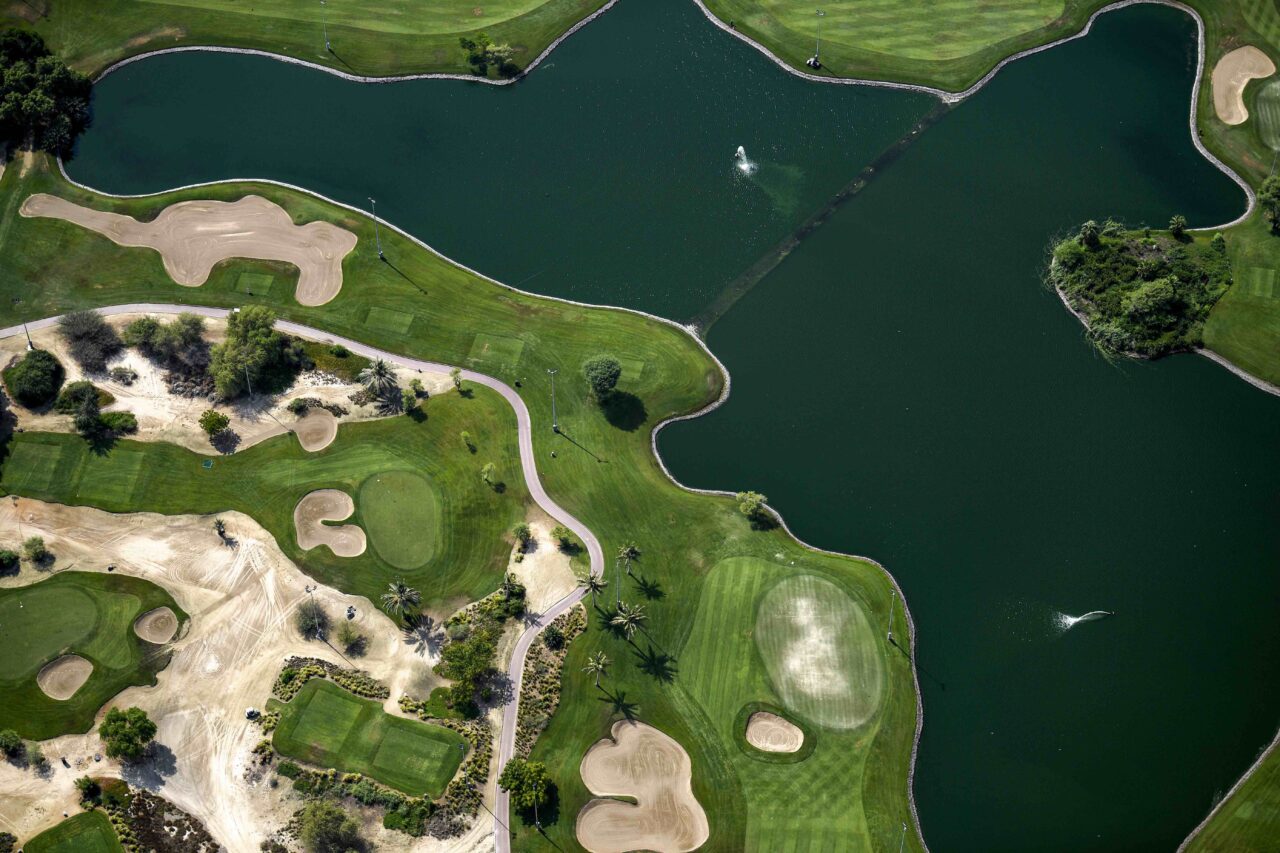 A golf club in Duba (Photo by KARIM SAHIB / AFP)

‘Golf in the desert’ has become one of sport’s great oxymorons but the arid landscape of the Middle East is now punctuated by some of the world’s finest golf courses. Since Emirates Golf Club opened in 1988 as, quite literally, a green oasis in the desert, the UAE’s golf profile and its role in the global game has grown enormously.

The history of golf in the Gulf

The Majlis Course at Emirates Golf Club has hosted the Dubai Desert Classic, a permanent fixture on golf’s annual calendar for the past 33 years, and has been joined in the interim by the Abu Dhabi Golf Championship (since 2006) at Abu Dhabi Golf Club and Yas Links, and the DP World Championship at Jumeirah Golf Estates (since 2009). Elsewhere in the Middle East, the Commercial Bank Qatar Masters (since 1999) and the Saudi International (since 2019) have also become regular events, while Bahrain and Oman have hosted major tournaments too.

But despite Saudi Arabia’s recent high-profile attempts to disrupt the sport’s status quo with a breakaway competition, (more on that here), golf’s spiritual home in the Gulf remains the UAE. Last year, Emirati multinational logistics company DP World signed a US$400 million sponsorship agreement with golf’s European Tour to become its title sponsor and many of the world’s top players compete in the ‘Race to Dubai’ — building points from their performances towards the season climax at the DP World Tour Championship each November and the opportunity to be overall champion.

Golf in the UAE has certainly come a long way since the first-ever golf course in the Middle East was opened in 1971; Dubai Country Club was a nine-hole ‘sand course’ built by its 150 members, with borrowed equipment. The greens were called ‘browns’, made from sand mixed with crude oil, and giant iguanas roamed the course.

From those humble beginnings there are now 21 golf clubs under the umbrella of the Emirates Golf Federation (EGF) across Dubai, Abu Dhabi, Ajman, Sharjah and Ras-al-Khaimah. Emirates Golf Club is also home to TopGolf — a gamified, entertainment-driven concept that aims to be accessible to golfers and non-golfers alike. The largest indoor facility in the world, My Golf Dubai with 14,000 square feet of immersive experiences recreating 190 golf courses from around the world, just opened at Dragon Mart.

It is an important step as golf has struggled with an elitism problem for many years; the sport has historically been dominated by wealthy, white men. This is perhaps best exemplified by the fact that Royal Troon, one of the world’s oldest golf clubs, only started allowing women to be members in 2016 and another historic Scottish club, Muirfield, welcomed its first members in 2019.

Golf in the Gulf has had no such barriers to female participation, though there is still work to be done in attracting more women to the sport. Chicks With Sticks, an organization founded by Irish expat Jenny Hennessy, has taken up that baton and since last year has been working with local clubs to arrange regular social golf and taster lessons for women in the UAE.

“I am a total golfaholic and have always wanted to share my passion with others,” Hennessy tells Livehealthy. “But after moving to Dubai, I found that my friends were always making excuses about why they didn’t want to start playing golf — usually around the expense and how long it takes to play. I felt like I had to do something about it and that’s how Chicks With Sticks was formed.”

Hennessy’s first major partnership was with the Claude Harman Academy at The Els Club in Dubai Sports City, who “jumped at the opportunity” to encourage more women to play. Now Abu Dhabi Golf Club has also come on board to host weekly sessions and Chicks With Sticks has introduced more than 500 female players to the sport, with members from as far afield as El Salvador and South Africa.

“The emphasis is on creating a fun and sociable atmosphere and every golf session finishes with a social hour at the clubhouse,” Hennessy explains. “I really think the UAE is the perfect place to start playing golf. The weather is amazing, the practice facilities and courses are world class — there is plenty of choice.

“Our mission is to build a community of likeminded people and so far it has been a success. Retaining people and developing our members into lifelong golfers is an important goal of mine and I’m trying to showcase that golf is a game for everyone and a game for life; I think that’s easy to do in Dubai.

“There is a huge drive worldwide to promote women’s golf and I am so honored to be part of the mission.”

While Chicks With Sticks is building the game at the grassroots level among UAE expats, Emirati involvement in golf has not hit the heights may would have expected given the country’s long association with professional tournaments.

Dubai World Tour CEO Keith Pelley has previously claimed that golf “has been embraced in the UAE thanks to events in Abu Dhabi and Dubai”.  But while the UAE’s global reputation as a golf destination has been undeniably enhanced, there has been little sign of the new generation of Emirati golfers that hosting these world-class tournaments was designed to inspire. No player from the UAE or wider Gulf has thus far played regularly on either the men’s or women’s professional tour, despite a number of Arab players competing in their home events over the years.

Twenty-four-year-old Ahmed Skaik is hoping to buck that trend and become the golfing pioneer the UAE has been waiting for. He has already had a taste of the big leagues, most recently playing this January at Yas Links in the HSBC Abu Dhabi Golf Championship, as part of a field that included golf superstars and major winners like Colin Morikawa, Rory McIlroy and Adam Scott.

Aref Al Awani, general secretary of Abu Dhabi Sports Council, has described Skaik as “the shining star of Emirati golf” and predicted he is “destined to achieve great things in the future”. Skaik, used to handling pressure on the course, appears unperturbed by the expectation that inevitably accompanies such high praise.

“There are many things that could be done to improve golf in the UAE,” Skaik tells Livehealthy. “It’s great that we have so many European Tour events but for locals we should do more.

“That’s my goal, to be able to play on the DP World Tour or PGA Tour in the future and to inspire the younger generation. I feel I am already doing that but I want to take it to the next level now and show them that Emiratis can do it.”

Like most Emirati children, Skaik’s first love was football but after seeing how much his dad enjoyed playing golf and reading about an EGF national team recruitment drive, he switched sports and never looked back.

“When I saw the smile on my dad’s face when I was playing golf, I knew I needed to give it a shot,” Skaik recalls. “It is an easy sport to fall in love with – it teaches you patience, how to control your mind.

“You need to have a positive mindset — if you are thinking negatively, something bad usually happens. You have to be positive, confident. In team sports you can be lifted by other players but in golf if you don’t put in the work, you will not be able to perform. The game humbles everyone who plays it.”

While there are big expectations that Skaik could break through to the elite level, the EGF recognises that greater engagement is required at the grassroots level to help identify young talent. In a recent interview, Aliya Al Qubaisi, head of the EGF’s junior development program, outlined her vision for Emirati participation. She revealed that 150 Emirati children have registered with the youth program this year. Encouragingly, 40 of them are girls.

“It is time for us to have a large golf team representing the UAE,” Al Qubaisi said. “We want to make sure that all the age gaps are filled and we are currently focusing on women particularly. We would like them to come and experience the sport and hopefully play themselves and encourage their children to play.

“We used to have only expats play this sport and gradually we are seeing more Emiratis, but reaching out to women particularly in the Northern Emirates and Western Region has been a challenge. We would just like them to come and give it a try. It is a life-changing experience both physically and holistically.”

Drinking can be an Emirati problem too

Why bitter gourd is THE superfood