Menu
Gatz, the epic eight-hour theatrical reading of The Great Gatsby is a brilliant, almost sardonic response to the question of adaptation. 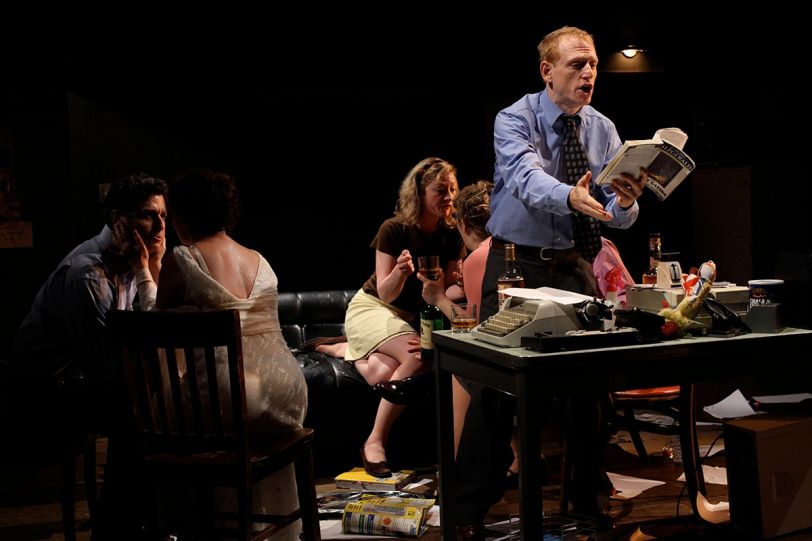 Gatz, the epic eight-hour theatrical reading of The Great Gatsby is a brilliant, almost sardonic response to the question of adaptation. The New York theater ensemble, Elevator Repair Service, did not actually “stage” the great American classic. Instead, it created a production that underscored the already sumptuous and rich world that Fitzgerald crafted with language. The play – for what else can we use to call it – involves scenes in which the book is read out from start to finish.

The Great Gatsby has endured a slew of adaptations. Film, TV, opera, ballet, and even video-game versions of F Scott Fitzgerald’s fiction float about, mere gestures to the classic. While mediocre adaptations often fall flat of the original, even truly great adaptations cannot fully do justice to the work. At best, they cast a different light on the work, allowing us to consider it in different ways.

Elevator Repair Services’ triumph with Gatz is that it is not an adaptation of The Great Gatsby. It isn’t even an interpretation of The Great Gatsby. Rather, it is something altogether different for a performance that takes place on a stage: a full investigation into the text unfolding before and with the audience. We the audience are almost like keen but shy students in a college seminar where the older students are fiercely debating this week’s assignment. We take it all in, participating with just our presence and silence.

Meaning lies in language, not only in its shallow communicative properties, but also in its actual construction. To adapt literature is to lose part of that beauty. Of course, you gain it visually and aurally. But it isn’t the same. Gatz, however, has it all, the splendor of Fitzgerald’s full novel, and also Elevator Repair Service’s lens of interpretation.

The performance-cum-reading is set in a drab office. It is the early 2000s, as sign-posted by the Dell computer that Scott Shepherd, the lead, attempts to fix all through the performance. (Spoiler: he doesn’t.)

Set designer Louisa Thompson’s dilapidated office contrasts with the opulence of Gatsby’s world in unexpected and poignant ways that reveal layers of the novel readers might have failed to experience before.

The typical office squabbles, technical difficulties, power dynamics, and water cooler idleness is overlaid with the tension of Fitzgerald’s text. The inertia of Nick’s life is emphasized by Scott Shepherd’s character shirking work to read the book. Tom Buchanan’s predatory charm is all the more familiar and sickening in this setting, and the office gives Gatsby the darker edge of illegitimacy.

The performance almost made me want every great book to be read out on a stage dressed as an office. Who knows what Elevator Repair Service would reveal of Ulysses or the Mahabharata.

Indeed, there is something of the Mahabharatha about Gatz. The length of Gatz resonates with many of the performance traditions of the east. The Mahabharata can last days. Gatz only last hours, eight to be precise, but still more than twice what you’d expect on Broadway. Eastern performances do not demand the same involvement and attention that Western ones do, which is why they can go on for days. Gatz gets away with it because it works.

Epic eastern performances tend to be about stories from legend, so the audience already knows the plot. Because the relationship to narrative is less formal, the attitude of the audience is equally less formal. Audience members seeing a performance of the Mahabharata will come and go as they need throughout the hours-long performance.

Gatz is decidedly in the western tradition of theater, which doesn’t usually work with stretched-out performances. However, The Great Gatsby works brilliantly here because it is a canonical work of American literature. No American student escapes high school without encountering the book, so in many ways the story is part of American culture, allowing it to sit in the place of legend.

Gatz is a bridge in the shape of an office set between the audience and the world of The Great Gatsby that is worth every minute of those eight hours. If you missed it at NYU Abu Dhabi’s Art Center, the performance will be in New York in January.

The mom: Why I pack food for travel