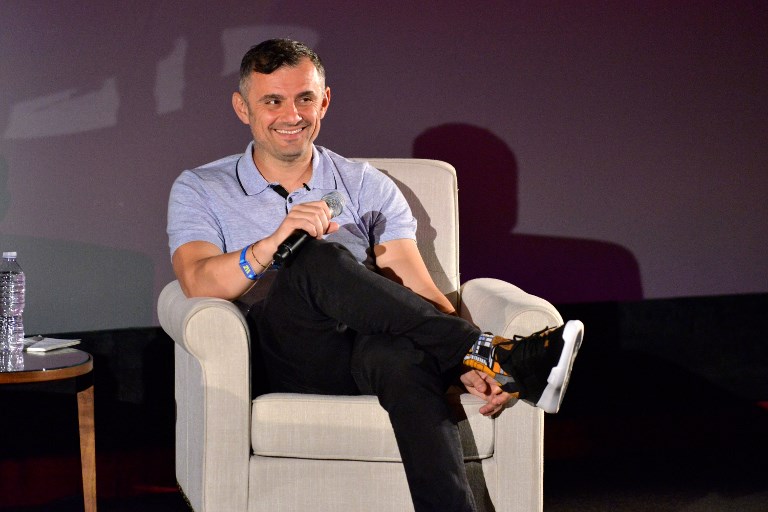 Don’t worry if you missed the American social media rock star Gary Vaynerchuk in the UAE – he spoke at this year’s Sharjah Entrepreneurship Festival. We’ve got the highlights. The 47-year-old child of Russian immigrants started working in his father’s store when he was 14, and then built a winery, a fortune – through business and by investing and divesting early in tech stocks like Tumblr, Uber and Facebook –  and a social media empire with 12 million followers and counting. He’s also published five books on  The New York Times bestseller list. After making his first appearance in the Middle East, Vaynerchuk is poised to hit the region hard. He grabbed 42,000 followers onto his @ArabicGaryVee account in just 10 days (he did this just by translating some of his English content and then buying underpriced ads on Instagram stories, he told the crowd).

Here are the top takeaways from his talk.

Gratitude is the only thing

Vaynerchuk is fond of reminding people how lucky they are to have been born human. The odds are 400 trillion to one – more rare than getting struck by lightning 10 times.

Just remembering that fact every morning is the key, he said, telling everyone to stop “complaining and crying about what you don’t have versus understanding and leaning into what you do have.”

He’s very nervous about all this entrepreneurship

As someone who has been living and breathing business opportunities since he was a kid, getting “the worst grades you can imagine” but hustling whenever he could – offering to shovel snow for neighbors in the winter and selling lemonade when it was hot – Vaynerchuk believes there is too much emphasis being put these days on owning your own company and being your own boss. After all, 99 percent of startups fail, he said repeatedly, and warned that the entrepreneurship boom would most definitely end in a crash.

Also, to found a company requires very rare qualities, including blind devotion and being numb to the opinions of others.

“To build a meaningful company takes a very long time, is very difficult. And more importantly, what has happened in the startup community,” he said, is that “everyone is pandering to raise capital, not to actually build a business.”

Many people are much more suited to being number 2 or 3 or 41 at a company – and will be happier, too.

You don’t have to move to the US

Vaynerchuk says it “breaks his heart” to think people born in the UAE and the wider Middle East don’t understand the tremendous opportunities that are available to them just by being here.

Citing the penetration of video and the percentage of youth as just two examples, he said too many people “underestimate what’s in front of them and overestimate what’s outside of them,” and think the key to their happiness lies in something they saw in a Hollywood movie.

“Please don’t get confused,” he said. ”There is so much opportunity within a square mile of your home, let alone the rest of the region.”

You have to produce content to be a player

Holding up his phone, Vaynerchuk said, “this is the game.” You don’t have to start your own company, but if you do?

“If you are not sharing your thoughts, your progress, your journey, your process to achieving your goals, the stories you want to tell and your products, your services, your startup… you are basically irrelevant in a 2018 world.”

And don’t forget to engage with your followers, he reminded the crowd. Too many people are focused on having millions of followers but fail to engage with the faithful followers they do have. Do so at your peril, he advised.

In whatever you do, you have to enjoy the process – because the outcome is not up to you. Vaynerchuk, who wears a daily uniform of T-shirt, jeans and sneakers – none of them a label – frequently rails against the luxury mentality. Exorbitantly expensive items are not only a waste of money, they show your priorities are messed up. Awareness, self-acceptance, loving what you do no matter where it’s going and not caring about the opinions of others are the real stuff of happiness.

“When you chase money, you lose always and forever, even when you make the money,” he says.

Get ready for the first Adnoc Abu Dhabi Marathon