Menu
Fitnessindxb, a homegrown UAE wellness group, is opening its first proper gym in Dubai’s Laguna Waterpark – and everyone is invited. 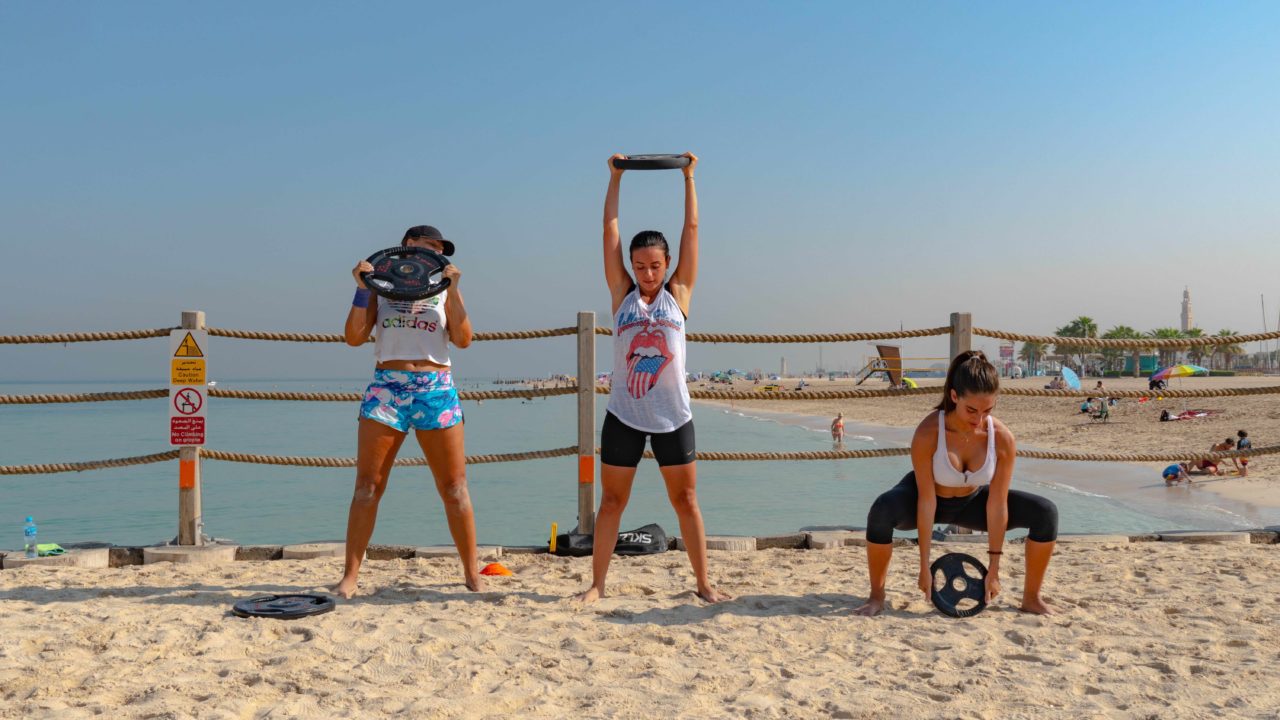 From beach workouts to healthy brunches, Fitnessindxb is a homegrown UAE wellness group with something for everyone. Now this friendly community has opened its first proper gym in Dubai’s Laguna Waterpark — and everyone is invited.

When Jonny Young first started out 2014, he had no marketing budget and no business plan. He just knew he wanted to work out while making friends.

“I started with a ‘free Friday morning workout’ idea,” says Young. “Despite the name, you’d be surprised at how many people asked what day it was and how much it cost.”

As word got around, the boot camps began to grow and Rob Donker, Fitnessindxb’s other founder, came on board.

Weather forced the duo to diversify from outdoor bootcamps into a whole host of other activities, including paddle boarding, quad biking and scuba diving. Five years later, Fitnessindxb is one of the strongest health communities in Dubai, pulling together hundreds of people from all different backgrounds. The hashtag #Fitnessindxb has been used more 165,000 times on Instagram alone. In a world of fake followers and bought engagement, that’s something Young is very proud of.

“I’m not entirely sure how our whole community grew,” he admits. “It was very organic and we had to be real, since we didn’t have a budget for PR. The community got to know us and saw we have genuine intentions, so it seems that the people we met wanted to help support us.”

Part of the pull of Fitnessindxb is its friendly, inclusive vibe. Newcomers are quickly looped in. It’s also far-reaching.

“The community is all about wellness,” says Donker. “But wellness doesn’t just mean abs and protein. It means meaningful connections, trying something new, having more time to play after a busy week, making new friends or business partners, and self development and growth.”

Mohamad Led, a systems engineer and Fitnessindxb regular, thanks the group for changing the way he sees fitness.

“It’s my Dubai healthy lifestyle family with whom I can spend quality time,” he says. “Now it’s not only a routine task that I have to do daily. It became much more interesting and interactive.”

That includes obstacle races and adventurous trips, as well as eating healthy.

As Fitnessindxb expanded from 10 to a hundred to hundreds of members, the business strategy behind it has had to evolve.

That means the group hosts activities and events alongside brands. They’ve launched a series of “fitcations,” too, with recent trips including skiing in Georgia and diving in the Maldives.

“One of my favorite memories involves enjoying hot chocolate, dancing and laughing together with our community at our recent winter sports trip,” says Donker.

Young points to another fitcation moment, which arrived after getting his scuba diving certification – something he had no plans of doing.

“As a result of organizing new activities, the majority of our team are now advanced divers,” he says. “That feeling of being in the ocean looking at the world from a new perspective was a wakeup call.”

At the bottom of the sea, Young found himself thinking about great life opportunities, and how often we are unaware of them.

Natalia Hassanie, co-founder of Positivity Performance, says her involvement in Fitnessindxb has made her the most active she’s ever been.

“It has definitely impacted my life,” she says. “I’ve adopted better eating habits. I train every day at the gym. I exercise and do yoga. I participate in obstacle courses… There are a lot of memories with the Fitnessindxb family.” One of her favorite memories is when her teenage daughters joined a group diving trip. “They became divers themselves!”

There are also new Fitnessindxb brunches. These are done in partnership with hotels to offer healthier foods, often focusing on light salads and lean meats. “Not everyone wants to do our bootcamp or yoga sessions,” says Young. “They, maybe, have their own training, but they still want to mingle with other people. The fitness brunch is perfect for that.”

Five years after launching, “finally,” says Young, the group now has an outdoor group class studio at Laguna Waterpark in La Mer. The space will have equipment and weights to take away the regular bodyweight-only limitation of outdoor workouts, plus changing facilities and showers.

“We are creating a fun and engaging way to get people to fall in love with working out, and one of those is doing your workouts outdoors.”

One thing Young wants to stress is that the community is for everyone of any ability.

“There’s no entry level. Unless you’re evil or coming with wrong intentions, we welcome you.”

Expect more expansions from the group, too.

“Our goal is to make Dubai one of the fittest and happiest cities in the world, a shared vision with Sheikh Mohammed bin Rashid,” adds Donker.

Even as it continues to grow, there’s a focus on keeping Fitnessindxb friendly, inclusive and simply fun. That’s something Jessica De La Torre, a community regular, loves.

“It’s changed my life and I’m always looking forward to their activities,” she says. “Especially things like last festive season bootcamp, when ‘big Santa’ threw Kyle into the sea. There are always good memories with the community.”

Gymnastics, contortion and social media are changing yoga – and not in a good way