Menu
In some ways, when an illness gets a hero, it becomes somewhat less formidable. That is probably why when one of the Arab world’s most beautiful women shaved off her signature long dark hair in solidarity with cancer patients, her post went viral. “Yes beauty is important and we all want to look our best, but we often forget that true beauty is from within, when we are at peace with ourselves,” 2004 Miss Lebanon... 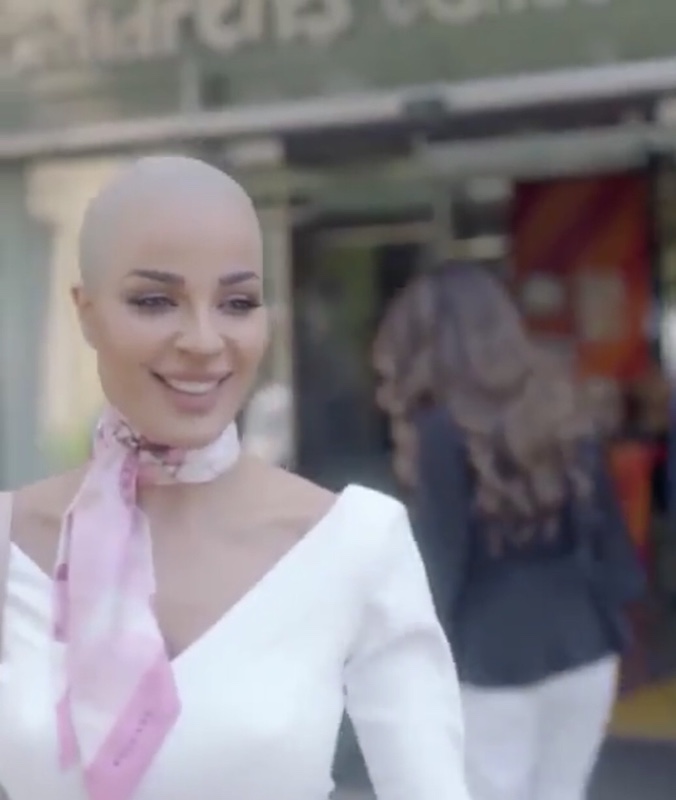 In some ways, when an illness gets a hero, it becomes somewhat less formidable. That is probably why when one of the Arab world’s most beautiful women shaved off her signature long dark hair in solidarity with cancer patients, her post went viral.

“Yes beauty is important and we all want to look our best, but we often forget that true beauty is from within, when we are at peace with ourselves,” 2004 Miss Lebanon Nadine Nassib Njeim told her 8.2 million followers on Instagram. The short video was taken from her hit Arabic series Khamsa w Nos (Five and a Half) last Ramadan.

“Yes, I shaved off all of my hair, but what has really changed?” she asked. “Nothing, I remain as I am.”

The actress posted that she wrote these words “from her heart” for the last scene of the series in support of all the cancer patients out there.

“When I looked into your eyes, I saw faith and patience, and I learned from you that optimism and hope is the only true strength in this in life,” she says.

It wasn’t the first time the Arab world has seen a shaved head, but it is the fact that Njeim didn’t have to do it — she could have masked her hair with a bald cap as most actors do — that hit a chord with the public. In the video, Njeim can be seen leaving the Children’s Cancer Center of Lebanon — where her head was shaved — before greeting young cancer patients. In the caption, she thanks St. Jude Children’s Research Hospital in Tennessee, which is affiliated with the center in Lebanon. The video was seen more than four million times, with many on social media applauding her move. Among them was Lebanese A-list fashion designer Zuhair Murad, who commented, “proud of you”.  The Middle East broadcaster MBC4, a channel tailored for women and young Arab families, shared the video on its Twitter page.

Cancer awareness has come a long away in the Middle East, a disease that was never named before, just called Al Marad Al Khabeeth, which means terrible or revengeful illness.

It was deemed a bad omen to even talk about it, as if somehow just saying the words could attract the disease.

Yet a number of female Arab celebrities in recent years have openly talked about their struggles with illness, mainly breast cancer. The Lebanese singer Elissa released a song and video last year in which she shocked the world by revealing that she’d had cancer, incorporating footage from her treatment.

Titled Ila Kol Elli Bihebbouni (To Those Who Love Me) more than a million people watched the video in the hours after its release, a number that has climbed to 21.7 million. The video ends with Elissa telling her fans: “I’ve recovered, I’ve beaten the illness, and I won. Early detection of breast cancer can save your life. Don’t ignore it, face it.”

The late 86-year-old Egyptian star Shadia donated her apartment to cancer research after she beat breast cancer; renowned Kuwaiti actress Zahra Al-Kharji openly discussed her struggles with cancer and the beloved Palestinian singer and activist Rim Banna used her decade-long battle with recurring cancer to raise awareness and create art, before finally succumbing to it in 2018.

In June, the Arab world lost 25-year-old Michele Hajal, a former Miss Lebanon runner-up that the public had been rooting for her since she was diagnosed with non-Hodgkin Lymphoma in 2018. Hajal turned her struggle into a source of inspiration, becoming a spokesperson for humanitarian causes.

After treatment in Lebanon was unsuccessful, she and her family launched a campaign to raise US$750,000 (Dh2.8 million) for CAR-T cell therapy in the United States and she traveled to the MD Anderson Cancer Center in the U.S. for treatment.

She had posted a positive message on Facebook in December, shortly after receiving the treatment, in which she said she had been “born again,” and was “cancer free.”

While female Arab celebrities are increasingly speaking more openly about cancer and other illnesses, there remains a void when it comes to male superstars. It is often only after a famous figure dies that the public discovers he had been suffering with an illness. Yet even in death a celebrity can create much-needed awareness.

When the romantic crooner from Egypt, Abdul Halim Hafez, died just a few months before his 48th birthday in 1977 from liver failure due to a complication from a water-borne parasite, the culprit behind the disease, Al Bilharzia, became widely known.

Suddenly schools launched awareness campaigns against Al Balharzia, with special television ads repeating on Egyptian channels and newspaper articles on this silent killer in the Nile. The parasite that killed Hafez became so famous, that even today, some can’t reference Balharzia without mentioning how it killed the Arab world’s Al Andaleeb Al Asmar, or “tanned nightingale.”

It seems that every cause needs a hero. With so much information online and in real life about everything and everyone, it is difficult to focus and be properly informed. We look up to celebrities in the hopes they will show us something new or shed a different kind of light on something we may be going through ourselves.

When someone uses their platform and their popularity for a bigger cause than just themselves, we tend to thank them for it. According to an elderly desert tribe: “The stars are there, up there, look up, and you will find your way.”

Featured photo: MBC’s Khamsa w Nos (Five and a Half) via Instagram