Menu
It’s been labelled a “revolution” and a “controversial threat” to golf, while some of its players have even received death threats for their involvement. The Saudi Arabian-backed LIV Golf tour has certainly shaken up one of the world’s oldest and most traditional sports. So what is all the fuss is about? The background Professional golf is split into two flagship competitions. The first and oldest is the PGA Tour, which was founded in 1929 and... 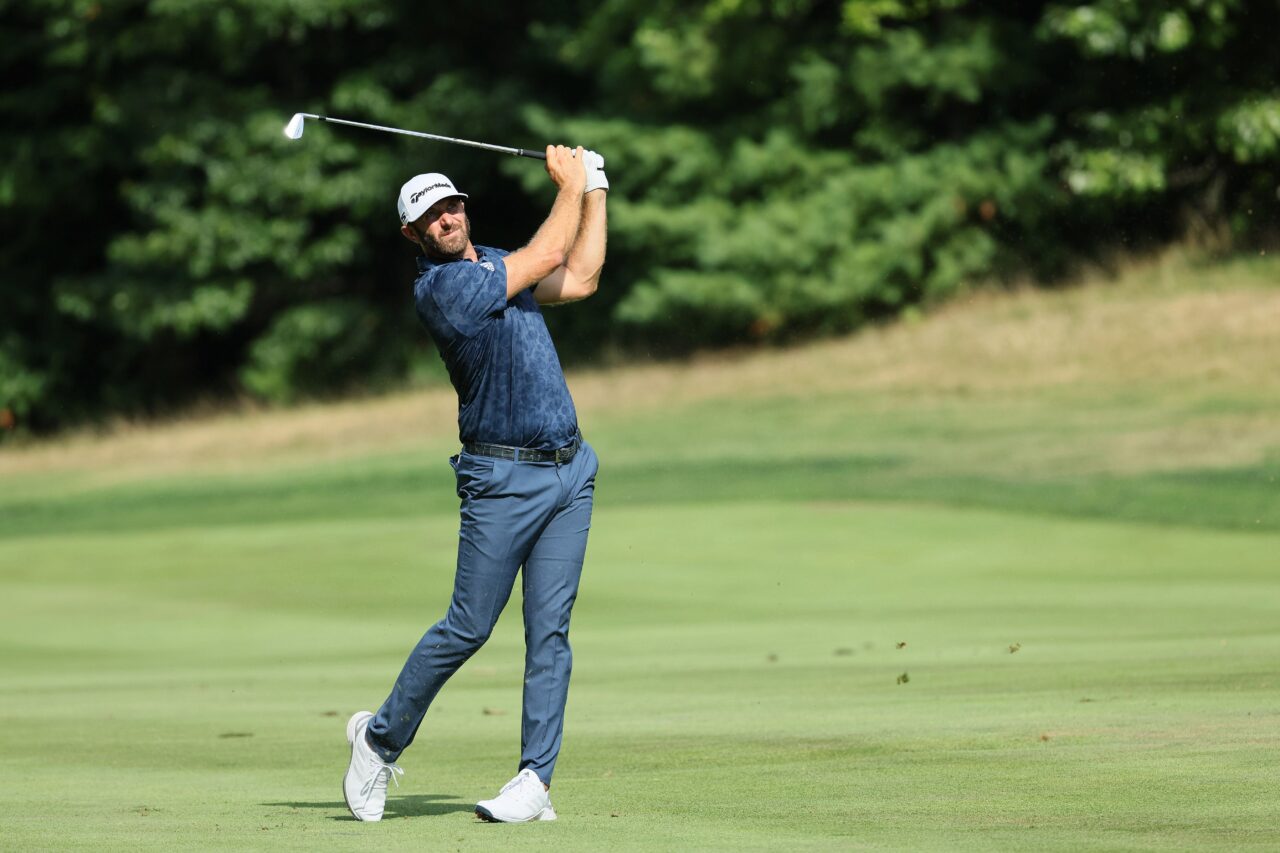 Dustin Johnson of the United States hits his second shot on the 8th hole during the final round of the LIV Golf Invitational - Boston at The Oaks golf course at The International on September 04, 2022 in Bolton, Massachusetts. Andy Lyons/Getty Images/AFP (Photo by ANDY LYONS / GETTY IMAGES NORTH AMERICA / Getty Images via AFP

It’s been labelled a “revolution” and a “controversial threat” to golf, while some of its players have even received death threats for their involvement. The Saudi Arabian-backed LIV Golf tour has certainly shaken up one of the world’s oldest and most traditional sports. So what is all the fuss is about?

Professional golf is split into two flagship competitions. The first and oldest is the PGA Tour, which was founded in 1929 and hosts events predominantly in the United States, though there were also tournaments in Japan, Mexico, Bermuda and the Dominican Republic this year.

The second and more recent addition is the European Tour – currently called the DP World Tour for sponsorship reasons. This competition has been providing an alternative since 1972, with events taking place across continental Europe, South Africa, China and the Middle East.

It is the DP World Tour that runs annual events in Dubai and Abu Dhabi, as well as Qatar and, since 2019, Saudi Arabia. It is well-embedded in the Gulf: the main international office is in Dubai, its annual order of merit is called the Race to Dubai, and its season finale, the DP World Championship, is played each November at Jumeirah Golf Estates.

Relations have generally been harmonious between the PGA Tour and the DP World Tour, with players allowed to play in events across the two tours, while every two years the Ryder Cup brings the best players in America and the best players in Europe together for an always-entertaining battle.

In 2021, former world number one golfer Greg Norman – an Australian who was one of the sport’s best players in the 1980s and 1990s and has designed more than 100 golf courses including the Jumeirah Golf Estates Earth & Fire Courses, home to the DP World Tour Championship every year – announced that he would be launching a new competition. Backed by the deep pockets of Saudi Arabia’s Public Investment Fund, LIV Golf promised to rival the PGA Tour and DP World Tour, shake up the status quo, offer new tournament formats and more lucrative appearance fees and prize money.

Between the announcement of the new tour and now, there has been a steady stream of players declaring their interest in, and actually joining, LIV Golf. Among them are some of the biggest in the world, including Phil Mickelson, Dustin Johnson, Sergio Garcia, Lee Westwood, Brooks Koepka and Bryson DeChambeau. Johnson, the former world No 1, was paid US$150 million just to take part in the tour and has banked an additional $7.7m in prize money already.

The inaugural LIV Golf Invitational Series event was at Centurion Golf Club near London in June, where South African winner Charl Schwartzel scooped $4.75m, the biggest single prize awarded in the history of golf. Since then, there have been events in Portland, Bedminster and Boston in the United States, with four further tournaments planned in Chicago, Bangkok, Jeddah and Miami. Next year, the tour will be rebranded the LIV Golf League.

How is LIV Golf different?

Normal golf tournaments are played over four rounds (72 holes), taking four days, though there is a ‘cut’ after two days when only some of the players are allowed to continue to the final two days. Many PGA Tour events will have more than 100 players involved at the start. In LIV Golf, there are only 48 players competing and they play three rounds (54 holes) with no cut, meaning everyone is eligible for prize money of some description.

In traditional PGA and DP World Tour events, golfers play in groups of three that go out consecutively – meaning that from start to finish, a day at a golf tournament lasts around 12 hours on the first two days and seven or eight hours after the cut. In LIV Golf, competitors all start at the same time (each group on a different hole, known as ‘shotgun’), meaning they are finished in closer to five hours. The idea is to make a more digestible, ‘action-packed’ broadcast.

Golf is almost always an individual sport but LIV has introduced a team element. There are 12 captains who pick three teammates each week and as well as playing individually, their scores count towards team totals. Each team has its own names, colours and logos and the idea is that they will build out into mini franchises. All of these changes have been designed in a bid to make golf more accessible and attract a new, younger fanbase.

Why all the controversy?

LIV has caused a seismic shift in the game of golf, with many people comparing its arrival to the launch of T20 cricket. That shorter format was initially rejected by many cricket purists but has gone on to be incredibly lucrative, with the Indian Premier League (IPL) now one of the biggest sporting competitions in the world. LIV is aiming to follow in the IPL’s footsteps, but finds itself unwelcome to many who don’t believe they are changing golf for the better.

Beyond questions around the format, there is no doubt that Saudi Arabia’s involvement has been a major controversy, with the Kingdom accused in some quarters of ‘sportswashing’, or using sport to drive business and boost their global reputation. Saudi Arabia had shown no real interest in the sport of golf until around five years ago but because of their financial backing they have now become a kingmaker in the global game.

The players who have jumped ship to LIV Golf have faced unprecedented criticism for a perceived decision to choose money over competition and prestige. The PGA Tour has banned all players who have signed up to LIV from competing in PGA events going forward, while the DP World Tour issued $100,000 fines and suspensions. Both organizations have been sued by some of the disaffected LIV players. Things are getting messy. Further challenges will come as more players leave the PGA Tour and DP World Tour, weakening their products while increasing the prestige of LIV Golf.

What do the experts say?

Jamie Weir, broadcast journalist for UK television channel Sky Sports News, has been covering the sport for a number of years. He has been a vocal critic of LIV Golf.

“When you have bottomless pockets and you can throw money at anything you can achieve a lot of things,” Weir says. “They’ve managed to sign some very good golfers. Money talks and for those players, and clearly they are motivated by money, but I’m surprised that people are giving up competitive golf for a money grab. I think the PGA Tour are still comfortable at the moment in that they haven’t hemorrhaged too many big names but many bridges have been burned. It’s sad and some of these players have tainted their legacy.

“I also find it very difficult to care about the golf itself. It is a 48-man field and 12 nonsense teams, 54-hole shotgun start. It’s exhibition golf. These tournaments don’t mean anything, they don’t have any history or prestige. These guys are motivated by one thing only: money. I’m somebody who has grown up watching golf. That means something, watching guys go toe-to-toe on a Sunday afternoon because they love the heat of the battle, they are competitive by nature and they want to win trophies with meaning and substance.

“This is golf dumbed-down for a lot of people. It’s an entertainment product rather than a sport. They’ve got music blaring, colourful graphics, players wearing shorts, concerts after the golf. If you enjoy it – and the fans who have gone along clearly do – that’s absolutely fine, but that’s my stand.”

At the other end of the spectrum is golf journalist and Dubai resident Joy Chakravarty, who feels there should be a little more gratitude to LIV for trying to transform the sport.

“The PGA Tour are upset because nobody likes competition and this is serious competition for them. They could have joined hands with LIV at the start of this journey —they approached the PGA to ask if they could work together but they didn’t take up that opportunity. Now it is all about competition and they are reacting to competition.

“The feedback from the players has been amazing. All of the 48 players are loving it. Everyone gets similar playing conditions because everyone goes out at the same time starting on different holes, players can play in shorts. The interaction with the crowd is so good and they can come closer to the players. I still think the guys are giving their best from what I see and they don’t approach it differently to how they would a tournament.”

“I don’t think the end game for LIV Golf is the end of the PGA Tour. That is not what they want. I spoke to Greg Norman recently and some of the ideas are fantastic – I think it has potential to be really big. They will be fighting for the best players to come to their tour just as the PGA Tour will. Every sport has gone through this kind of transition. If you want to have a new format, if you want to have something different there will obviously be a lot of people who won’t like it but also a lot of people who will like it. Ultimately, it has the potential to grow the number of fans of golf.”