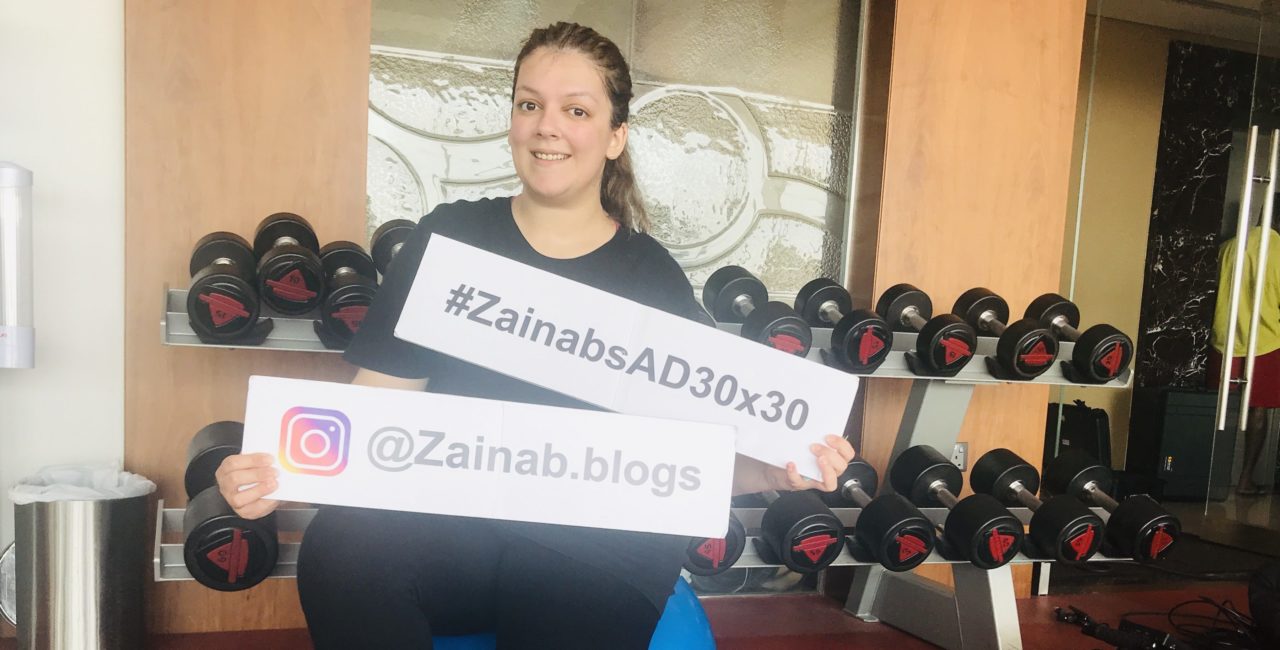 It was partway through the Dubai Fitness Challenge that  Zainab Khan realized how low her personal fitness level had sunk: she didn’t have the strength to get easily from a seated to a standing position.

“My knees were weak, my back was gone and I was like, ‘This is terrible’,” says the 33-year-old new mom in Abu Dhabi. “I knew this was all weight-related and I’m not active and I need to get out there and I need to do something about it.”

So what did she do? The Dubai Fitness Challenge wasn’t even finished when she decided she would conduct her own version in Abu Dhabi. Enter #ZainabsAD30x30, a very personal endeavor in which she has worked out every single day, often at a new gym.

“I thought, ‘Nobody is doing it here’,” she says. “And you know, the whole idea of fitness is much bigger in Dubai compared to the capital.”

As Khan, who is head of HR at an insurance brokerage and was born and raised in the capital, worked her way through the days, gyms began contacting her and joining her workouts, too.

“There were a lot of people I didn’t know who follow me on Instagram, who took classes wherever I was going,” she says. “So that was very heartwarming. I thought it’s small, but at least I’m making a change.”

Fitness First, MProve Fitness, Fitness Express, Adrenagy, Primal Gym, a brother-sister duo’s Najda Street workout Fit Bhangra and her own gym, Viva Fit, are among the places and ways she has broken a sweat during the month-long challenge, which wraps up Tuesday.

The toughest workout she did was at Boost Fitness, owned by the military trainer and fitness instructor Abdo Ben Abou.

“I couldn’t move properly for almost five days because my muscles ached,” she says.

The most fun? The Bollywood workout at Vibez Fitness. And the most meaningful happened on Day 23, when she joined Clari Lehmkuhl, the UAE’s first Zumba instructor with Down Syndrome, as she led a class at Fitness Express. Lehmkuhl was being filmed as part of a documentary on people of determination, which is being produced by Mubadala and Vice Arabia.

“This was different, and a good different,” says Khan. “I got very overwhelmed at the end of the class, looking at Clari and what she does.”

While she never bounced back physically after having a baby last year, Khan says she struggled emotionally, too.

“I tried to get working out after the baby, but I just couldn’t get myself to do it,” she says. “I was going through this whole phase of postpartum depression and I was just in some other world.”

Khan has no plans to stop working out after her 30×30 is up, either.

“More than anything else I wanted to motivate myself to work out,” she says. “And I thought this was a good way to get involved.”

Is Ikea homogenizing our taste?

How to end breastfeeding the right way