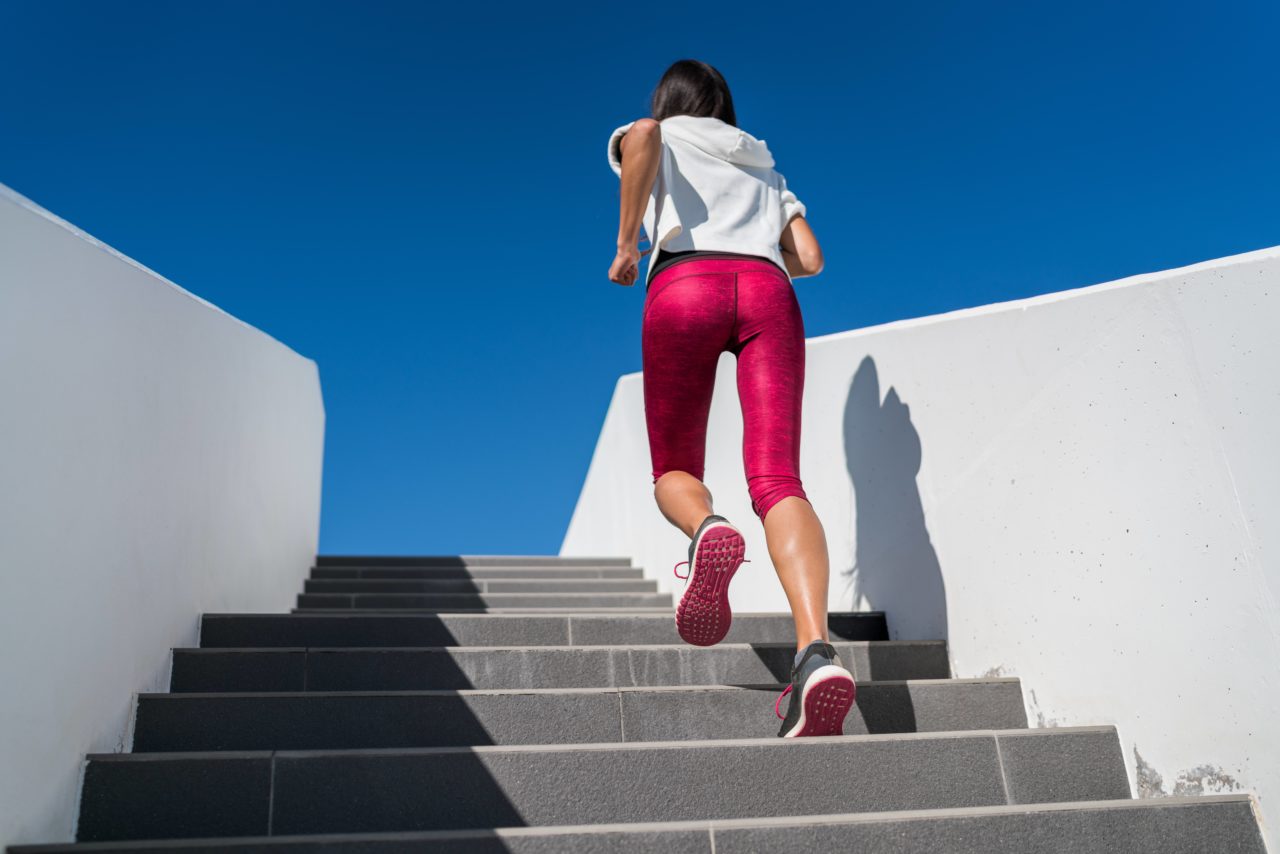 I’m in the middle of a torturous round of leg lifts when the trainer makes her way over to me.

“Squeeze your bum!” she yells over the music.

I’ve been coming to Anya Tarasiuk’s wonderfully challenging Bounce and Tone mini trampoline class at Bodytree studio in Abu Dhabi for more than a year, and even though she drives home this squeezing business in each and every one, I realize I’ve totally forgotten about my poor glutes – yet again. I immediately squeeze, so when she pokes one of my glutes with her index finger, she hits only tensed muscle.

Cheating, but I’m certainly not alone. Tarasiuk is just one of a chorus of trainers and therapists warning about the importance of avoiding “dead butt syndrome.”

Also known as gluteal amnesia, napping or weak glutes, the term refers to gluteal muscles that haven’t been engaged for so long that they no longer work properly. This can cause a host of painful problems and injuries up and down the body -think hips, lower back, knees – when other, less-equipped muscles are forced to take over.

“The technical term for this is ‘paresthesia,’ an abnormal sensation felt in your body due to compression or irritation of nerves.”

Even without any of those problems, weak glutes can really lay waste to hours spent working out.

“Your glutes are what I call the powerhouse of your body,” explains Tarasiuk. “They are one of the largest muscle groups in your body, which help you to stay upright and enable you to power through workouts.”

The issue arises at an interesting time, when the fitness industry, Hollywood and social media are all hyper-focused on the desirability of building up this part of the body.

Zoe Anderson, who moved to Dubai from France last year, has attracted an Instagram following of almost half a million people. When she was named best female digital star at the Women’s Health/Men’s Health Awards in November, Anderson talked about spending “a lot, a lot, a lot” of time working on this area — and encouraging others to do so as well.

In January when she posted a simple video of seven glute exercises, she suggested her followers spend five to 10 minutes on them daily.

“You’ve probably seen it all over social media, saying that you should do it before your legs workout, which is true,” she says. “But you should also do it on your days off to learn to use your glutes during your daily activities as well.”

Yet sitting all day and failing to move later, weakening glutes and putting stress on the hip flexors, is only part of the problem. Even fit, active people eager to get in the best shape possible routinely ignore their glutes, forcing other muscles to take over.

Tarasiuk, for example, sees a lot of people using their lower back to power back leg lifts or lift their hips off the ground into a bridge.

“You must always engage your abdominals first and activate/squeeze your glutes, then lift your leg-hips up, while remaining engaged throughout the movement,” she says. “If you do not follow these steps, then it can result in putting too much load through the spine, giving you back pain.”

When we don’t engage our glutes during squats, we end up overworking our hamstring muscles along the back of the thighs, which leads to extra strain on other joints, namely knees.

There are actually three muscles making up the glutes: the maximus, medius and minimus. Tarasiuk makes sure to combine functional body weight movements along with resistance bands and other equipment to fully engage and activate the muscles, making sure her clients hit every movement plane.

“Little do people know that there are three, which is why there are so many knee injuries and clients who are disappointed with their progress in this muscle group – the butt,” she says.

Jennifer Dodge, a physiotherapist at Bounceback Physiotherapy on Yas Island, says people are jumping straight into exercises that require more gluteal stability than they realise.

“People tend to go for more heavy loaded, single-plane exercises such as squatting and running, with minimal awareness that their glutes need strengthening in a multi-plane approach,” she says. “This can have an impact on the lumbar spine, foot positioning and patella – knee cap – tracking, for example. It causes compensatory movements and overloading in the joints down the kinetic chain.”

At Jumeirah at Saadiyat Island Resort’s new luxury gym Bodyism, each fitness class starts with foam rolling and activation exercises. That’s by design, to wake up the larger muscles and protect other parts of the body before putting further stress on them, says Sarah Jane Horne, a Bodyism trainer and yoga teacher.

“We’ve got these lovely green bands and that’s for your activation,” she says. “So we activate those glute medius, outside edges of our legs, that are really lazy. We don’t switch those muscles on as much and those muscles protect our knees.”

Rhys Hamer works for Bespoke Ride in Dubai, which specializes in strength, conditioning and triathlon training. Hamer says “90 percent” of people who come to him with an injury have weak glutes. There’s not only an esthetic issue to fear here – Hamer calls it “pancake bum” – but even without an injury or pain, weak glutes seriously hamper athletic performance.

“The glutes are the biggest group of muscles in the body,” says Hamer. “If you want to sprint faster, jump higher or get leaner you need to be working your glutes.”

There is an important first step to changing this reality that Hamer advises: daily sessions working out any knots and kinks in the area.

“Even before you think about working your glutes try foam rolling and stretching your thighs,” he says.

Then, Hamer has his clients move on to a simple hip-glute bridge with a bar or weighted bar.

At Perfect Balance Rehabilitation Center in Abu Dhabi, founder and physiotherapist Amy Gilbert – a member of livehealthy.ae‘s expert panel – commonly sees poor activation and recruitment of all the posterior chain muscles in her patients, stretching from the back extensors to the glutes, hamstrings and down into the calves. When that happens, the anterior chain takes over, placing too much of a burden on the quads and hip flexors.

“The glutes are a huge support system for the pelvis, lower back, knees and general posture and alignment,” says Gilbert. “They are commonly poorly activated and under-trained. If we don’t have that ‘perfect balance’ we can’t expect our muscles to get stronger, our performance to improve and our bodies to work at optimum performance levels.”

She also advises clients to incorporate glute activation into their warm up, which helps to pre-activate the muscles before their workout of choice.

“You want to train your glutes to activate when you need them to work, then relax when they are not needed,” says Gilbert.

She recommends keeping these muscles free of painful trigger points by regular rolling with a trigger point ball.

As for activation exercises, Gilbert recommends:

“It’s too easy to go to the gym and to look in the mirror and say, ‘this needs to be bigger’ or ‘I need to tone my legs,’” he says. “Don’t forget the muscles we can’t see. The back, glutes, hamstrings, calves and feet — aka the posterior chain — all play a massive part in how we can train better. It tends to be that these muscles are so weak they can cause injuries.”

Reducing back pain, improving power and performance, preventing injury and improving posture are all benefits of strengthening the glutes, write Mike and Vivienne Addo, aka Dubai trainer powerhouses Mr and Mrs Muscle. But as they say on their website, there is another benefit of keeping those muscles strong — and it’s one of the most sought-after in all of the fitness world.

“Your bum and legs are the largest muscles in the body – the more muscle you have the more fat you burn. Why? Because your muscles are always metabolically active, meaning they burn calories even when you are resting. Whereas excess body fat is as lazy as the person storing it.”

What to do after an autism diagnosis in the UAE

Mindfulness changed Bahar Wilson's life, now she is spreading it