Menu
Deepak Chopra has a message for livehealthy.ae readers: The future wellbeing of the Middle East lies in its youth. 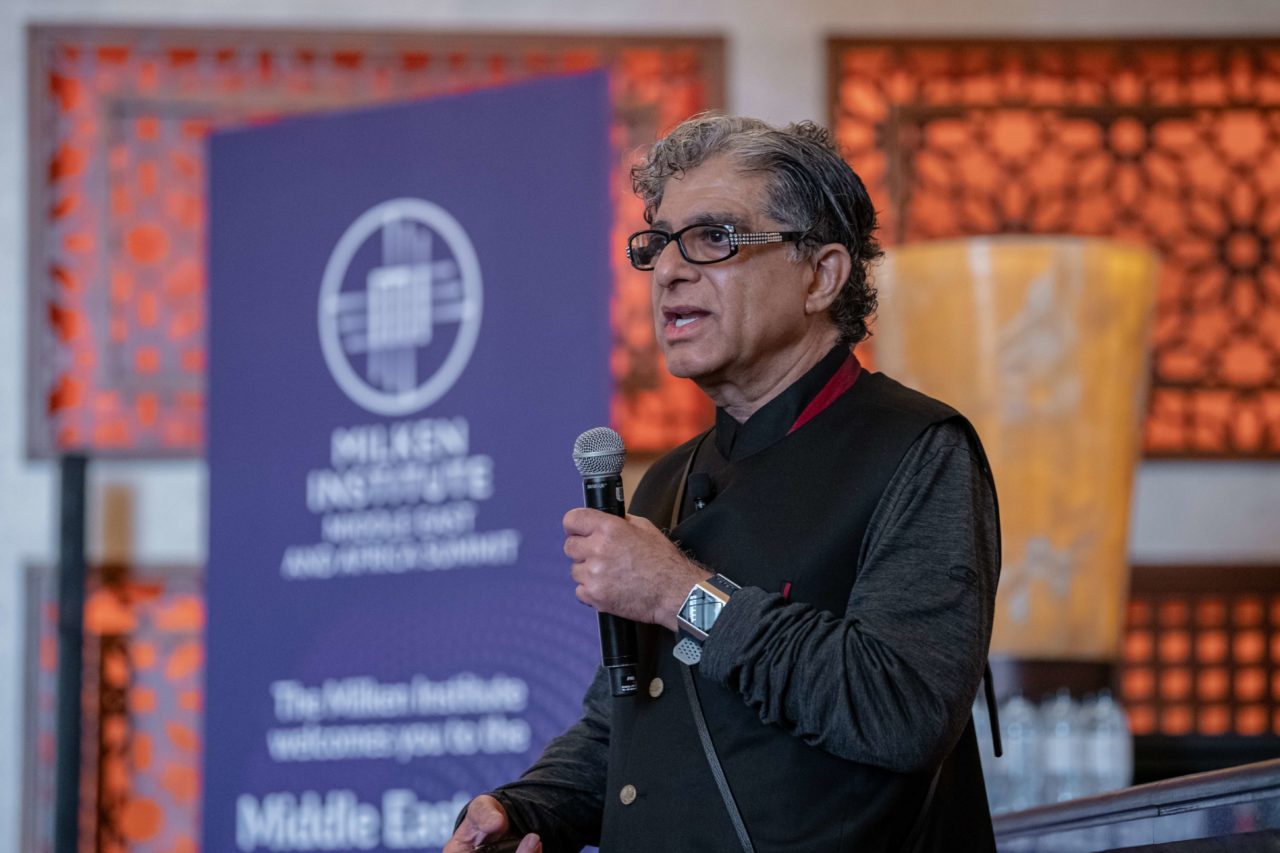 Deepak Chopra has a message for livehealthy.ae readers: The future wellbeing of the Middle East lies in its youth’s ability to stay open and curious.

“[For] my contemporaries, it’s too late,” said Chopra, during an interview conducted during the Middle East and Africa Summit in Abu Dhabi Tuesday. “The future leadership is in the youth. These young kids today are very different. They’re not so easily influenced by selfish needs and they really want to make a difference in the world.”

The chief of the Chopra Institute, who was born in New Delhi, said there was another challenge facing millennials in a region with significant political and environmental issues. That is how to pursue curiosity, adventure, wonder and lifelong learning — rather than letting age slowly erase their idealism.

“They say that people don’t grow old, when they stop growing they become old,” Chopra said with a smile.

The 73-year-old spiritual leader has personally witnessed a powerful and agenda-setting evolution of awareness in the Middle East, from Dubai and Abu Dhabi to Kuwait, Bahrain and Saudi Arabia.

“The Emirates has become an international hub for so many people, so it’s a microcosm of the planet right now, with all the expatriates and locals,” he said. “I’ve been coming to this region for many years and it’s moving faster here than anywhere else in the world.”

During his talk on the Future of Wellbeing and Tech at the summit, which was organized by the Milken Institute, Chopra spoke about the need for mankind to go beyond societal and scientific conditioning in a quest to truly understand who we are.

Chopra mentioned his seven pillars of wellbeing — sleep, meditation, movement, emotions, nutrition, grounding and self-awareness — and predicted great things for a future of well-being; one he believes will be personalized, predictable, participatory and process-oriented.

“Only five percent of disease-related genetic mutations are fully penetrant, guaranteeing a disease will occur,” he said. “Ninety-five percent of chronic illness is influenced by environmental factors, including our mental environment and relationships. It is known that low-grade depression, anxiety and chronic inflammation are present in most people decades before a chronic illness is diagnosed.”

Over the next decade, artificial intelligence (AI), virtual reality (VR) deep machine learning, epigenetics, neuroplasticity and the understanding of the microbiome will lead to modalities of prevention and treatment, he said.

This will be made possible through influencing biological activity, self-regulation and homeostasis, an interface linking science, emotional and social well-being, as well as spiritual intelligence.

Among the scientific studies being conducted at his Institute, said Chopra, is one that measured all the genes responsible for self-regulation before and after one week of a meditation retreat.

The genes responsible for self-regulation shot up — some by as much as 70-fold — while inflammation was reduced significantly. Chopra also cited work indicating that a plant-based diet with maximum diversity was found to be the most effective way in shaping our genes.

Another study at the Institute, Self-Directed Biological Transformation Initiative and Wellbeing, looked at the role of short-term intensive education about self-awareness, body awareness and connection.

“These show very clearly that when you have non-dual experiences, when you feel connected to all that exists, that changes your gene expression itself,” Chopra added. “What is really remarkable is that there is no gene that has ever evolved to cause aging. So people don’t die of old age, they die of chronic illness.”

People may be financially successful, have perfect social lives and physical health but still suffer from fear, anger, hostility, depression, guilt and shame. These emotions are associated with inflammation and interfering with the ability of the body to self-regulate.

Chopra spoke of being able to choose to shift from one experience to another, with an unattached sense of awareness.

“Meta cognition”, explained Chopra, is a concept found in scientific literature that entails being aware of an experience in the present moment without anticipation, regret nor resistance.

“You can then enter a state called flow, usually described by athletes in peak moments,” he explained. “Time slows down and it even stops, sound disappears, and you have the experience of witnessing your body, mind and the world as a unified experience. The more experiences are directed in love, compassion, joy and equanimity, the closer you are to finding the key to immortality.”

Looking to the future, everything will be able to be bio-hacked as all that is practiced can be measured, from eye movements and breathing to heart rate variability, blood pressure regulation, dreams and digestive processes.

“There is no experience that cannot be recorded in the brain or measured in the body,” Chopra said. “All experience is measurable, and experience is what we metabolize into what we call mind and body.”

The Chopra Institute is working on creating new algorithms, AI and VR that correlate biometrics to wellbeing. And soon Chopra won’t have to physically travel to deliver a message he hopes resonates long after he is gone.

I make funny videos to teach my students about nutrition